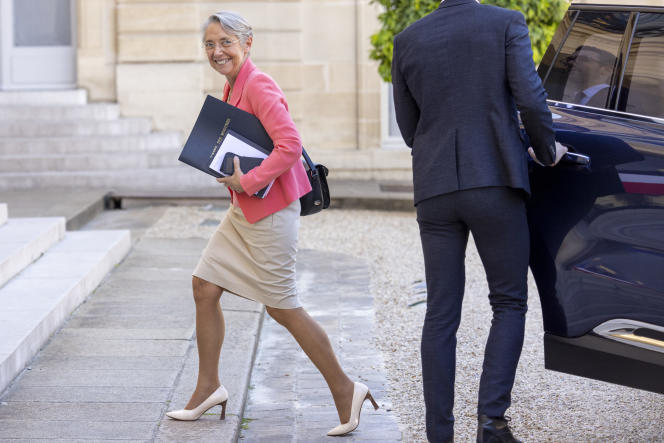 The precautionary principle finally prevailed. For several weeks, a doubt hovered over the intentions of the head of government, Elisabeth Borne: was she going to request – or not – a vote of confidence from the deputies, at the end of her declaration of general policy, which she must pronounce Wednesday, July 6, at the National Assembly?

Two days before the deadline, this strategic question has finally been settled. “The Prime Minister will not seek the confidence of parliamentarians”, announced the new government spokesperson, Olivier Véran, Monday, July 4 in the afternoon, after the first cabinet meeting of the Borne 2 government. On Wednesday, at 3 p.m., the Prime Minister will therefore make a speech to the deputies; then another the same evening in front of the senators, which will both be followed by a debate without a vote.

A decision that stems directly from the balance of power in the National Assembly: since the legislative elections, the presidential camp has only a small relative majority. By totaling all the deputies Renaissance (the presidential party), MoDem and Horizons, the pro-Macron forces have only 250 seats, far from the absolute majority, fixed at 289. And less than the opposition, which totals 327 members .

“We counted the number of votes that the Prime Minister would have been sure to receive in the event of a vote of confidence, we are not certain that the conditions for this confidence would have been met”, admitted Mr. Véran. Before adding: “Trust is not decreed a priori, it is patiently built text after text. »

“That would be suicidal”

Ironically, the reshuffle, which took place on Monday morning, had the effect of making it even more difficult to obtain an absolute majority in the National Assembly. Because several deputies of the presidential majority – like the macronists Roland Lescure (French living outside France) and Hervé Berville (Côtes-d’Armor), or even the MoDem Jean-Noël Barrot (Yvelines) and Agnès Firmin Le Bodo (Seine-Maritime) – entered the government. This caused the loss of votes in the event of a vote, their alternates only accessing the Palais-Bourbon after a period of one month.

For lack of sufficient troops, Elisabeth Borne therefore gave up venturing into such a ballot, the potential consequences of which could have been very serious. According to Article 50 of the Constitution, a negative vote would indeed have led to the resignation of the government. And therefore of its leader.

“To ask this question would be suicidal,” said the leader of the deputies of the Les Républicains (LR) party, Olivier Marleix. A point of view partially shared within the majority. Certainly, several pro-Macron deputies consider it unreasonable to “play everything on a vote” and warn of the risk of “falling into an institutional crisis”. But others argued all the way for the prime minister to submit to a vote, on the grounds that “it would allow her to establish her legitimacy” and “to have the force to act”. She who does not have much experience and has to deal with a complicated political configuration, which some call “mission impossible”…

The leftist opposition immediately denounced “an admission of weakness” and a “denial of democracy”. The leader of La France insoumise (LFI), Jean-Luc Mélenchon, notably castigated a government “maintained by the sole favor of the prince”.

The vote of confidence, a tradition, not an obligation

Faced with these criticisms, Olivier Véran denied that this decision was “an admission of helplessness”, recalling that the absence of a vote of confidence – a vote which is a tradition, not an obligation – was “not a first” under the Fifth Republic. In fact, four prime ministers did not engage the responsibility of the government on its general policy before the National Assembly: Maurice Couve de Murville in 1968, Michel Rocard in 1988, Edith Cresson in 1991 and Pierre Bérégovoy the following year.

To reassure itself, the executive also wants to believe that public opinion is not interested in this type of “Parisian-Parisian” subject, relating to the functioning of Parliament. Even if 71% of French people wanted this vote of confidence, according to an Elabe poll released on June 29.

Behind the scenes, a more decisive element convinced the executive not to seek the confidence of the deputies: the fear of being once again accused of being ambiguous in its relationship with the National Rally (RN).

Because, if LFI has already made known its desire to file a motion of censure against the government, Marine Le Pen has, for her part, hinted that her group would not necessarily file one. And worse, that the 89 deputies of his group could abstain in the event of a vote of confidence. Which could have made the Prime Minister’s job easier. And again plunge the macronist camp into embarrassment, after having already been accused of having voted for far-right candidates in the secret ballots for the distribution of positions of responsibility within the National Assembly. This resulted in the election of two RN vice-presidents.

First test for the government on purchasing power

But officially, Mr. Véran has above all put forward the will of the executive to move forward, by seeking “consensus”. “Our hand is outstretched, with benevolence, with the absolute desire to reform our country,” he said.

The first test for the government will be the bill on purchasing power, which will be presented on Thursday at a new Council of Ministers and examined from July 18 in Parliament. “No one has an interest in blocking,” warned Mr. Véran. Before him, in the preamble to the Council of Ministers, Emmanuel Macron had already deplored the refusal of “government parties” to participate in “any form of coalition”. A way to put pressure on the opposition. And to take public opinion to witness, by designating in advance those responsible for a possible blocking of the reforms.