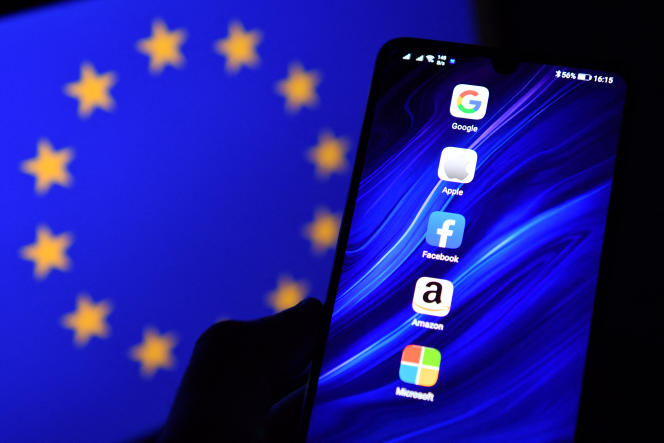 New legislation which is a pioneer and could inspire other countries, including the United States. The European Parliament approved, on Tuesday July 5, by an overwhelming majority the great regulation of the European Union which imposes new obligations and prohibitions on the digital giants to limit their abuse of power and put an end to the zones of lawlessness on Internet.

The new legislation was already the subject of an agreement in the spring between the co-legislators and will still have to obtain the final approval of the Member States next week. It consists of two texts presented by the Commission in December 2020:

This regulation must stem the anti-competitive practices of Gafam – Google, Apple, Meta (Facebook), Amazon and Microsoft. It was approved by 588 votes (11 against, 31 abstentions).

The DMA marks a change in philosophy in the fight against the abuse of large platforms. After years of chasing in vain after their offenses in endless legal proceedings, Brussels wants to act upstream, by imposing rules on them to respect under penalty of dissuasive fines. Goal: Act before abusive behavior destroys competition.

The legislation establishes a control of Brussels on each operation of acquisition of these giants, whatever the size of the target. Google will be banned from showing favoritism to its own services in its search engine results, as it has been accused of doing with its online retail site, Google Shopping.

The new law will also prevent Amazon from using data generated on its sites by corporate customers to better compete with them.

The objective is to regulate online content by forcing major platforms to respect the laws and cooperate with regulators. This regulation was approved was approved by 539 votes (54 against, 30 abstentions).

The DSA intends to put an end to the abuses of social networks which have often hit the headlines: assassination of history professor Samuel Paty after a hate campaign in October 2020, assault of demonstrators on the Capitol, in the United States, in January 2021 in party planned through Facebook and Twitter, etc.

The text also concerns sales platforms overrun with counterfeit or defective products, which can be dangerous, such as children’s toys that do not meet safety standards.

The new regulation will require the rapid removal of any illegal content (according to national and European laws) as soon as a platform becomes aware of it. It will force social networks to suspend users who “frequently” violate the law. The DSA will require e-commerce sites to pre-check the identity of their suppliers.

It requires “very large platforms”, those with “more than 45 million active users” in the EU, to self-assess the risks of using their services and put in place the appropriate means to remove problematic content. They will be required to increase the transparency of their algorithms and will be audited once a year by independent bodies. “The moment of truth for the DSA will be its implementation” by companies, warned the CCIA association, a lobby of tech giants, questioning their ability to apply “these complex rules”.

“There will be a before and after DSA and DMA,” promised the European Commissioner for the Internal Market, Thierry Breton, behind the texts with his competition colleague, Margrethe Vestager. “Many thought that regulation would take years or be impossible, too complicated, the lobby too strong…”, he argued.

“We took back control of the technology. It was about time,” said Danish MEP Christel Schaldemose (S

But the German Andreas Schwab (EPP, right), rapporteur for the DMA, warned that the success of the new rules would depend on the means granted to the European executive, now vested with regulatory powers. The Commission must “recruit enough staff”, he commented on Twitter. This concern has been relayed both by consumer organizations (BEUC) and by European employers (Business Europe) who welcome the new legislation.

In response, Thierry Breton announced the recruitment of 100 full-time experts by 2024 and the creation of a high-level European center on the transparency of algorithms.

News Editor - July 6, 2022 0
In difficulty since the loss of a large contract with the incumbent telecommunications operator, Scopelec, a subcontractor for Orange specializing in the deployment of...

Tour de France 2022: on the cobblestones, leaders in difficulty to...

Football: England bet on the Women’s Euro to affirm their status...