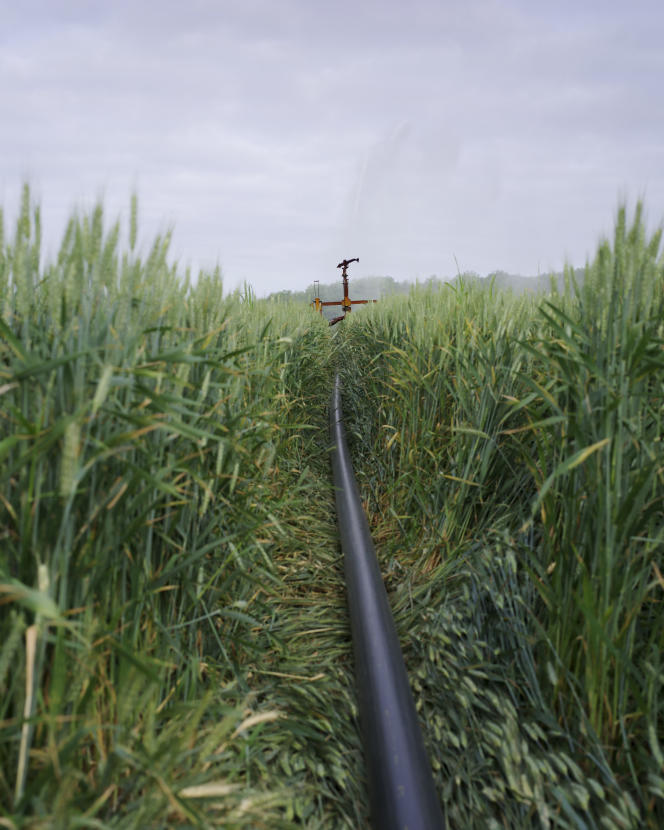 In brokerage rooms and on supermarket shelves, wheat prices are soaring, and it can already be seen on receipts. The price of soft wheat even reached a peak on Monday, May 16, closing at 438.25 euros per tonne, before falling to settle on Thursday, at closing, at 422.25 euros. But what is causing this “wind of madness” in the markets?

The situation is “unprecedented”, notes Nathan Cordier, analyst for the consulting and agricultural market analysis firm Agritel. Bad economic conditions have accumulated in recent weeks on the global production front. And the current difficulties are part of an already tense context, inherited from the previous season. On the one hand, harvests in North America were quite weak in 2021, even though it is one of the main exporting regions – the United States accounted for nearly 10% of the flows recorded in 2020. On the other hand, demand has increased under the pressure of rising global demography.

The market reacts to this balance of power between supply and demand for wheat, and the former is “clearly insufficient” compared to the latter, explains the analyst. A “succession of disasters” since the outbreak of the Russian invasion of Ukraine in February has further slashed global production. In addition to the war in Eastern Europe, there was almost simultaneously an Indian embargo on wheat exports and an early drought in France, already threatening yields.

The war in Ukraine is the first event of the year to have shaken the wheat market. Russia and Ukraine together represent “more than a third of world flows” of this cereal over a smoothed year, and “up to 60% over the period from July to October”, assesses Nathan Cordier. However, Russian production no longer participates in the world market since Vladimir Putin decided to restrict exports, at least temporarily, in order to control consumer prices in his country.

Ukraine is facing a double problem. First, a strong risk weighs on its wheat production since “about a third of its winter wheat acreage is located in the east of the country”, the epicenter of the fighting between Russian and Ukrainian forces, says the analyst. from Agritel. At satellite level, the difference from the usual seasons is already visible, according to images recorded between April 14 and April 22 by a NASA satellite and analyzed by the geoanalysis company Kayrros.

The specialist in satellite imagery and geolocation applied to the environment carried out a precision infrared analysis to assess the state of plants and thus predict cereal production. At this stage, Ukraine would be able to produce 21 million tonnes of wheat in 2022, 12 million less than in 2021, estimates Kayrros, a drop in harvest yield of 35% compared to last year .

On the other hand, producers who nevertheless managed to sow and harvest their wheat would not be able to export it as optimally as before. While nearly 95% of exports were carried out by sea, the Russian navy, from the first hours of the conflict, crisscrossed the Black Sea, blocked Ukrainian ports, shelled the port cities of Mariupol and Mykolaiv, threatened Odessa and mined all maritime access.

Rail and road will only be able to compensate for a minimal part of the departures of goods by boat, up to 1.5 million tonnes of products, estimates the analyst, out of the usual 6 million.

Faced with such a supply shock, analysts were betting on significant Indian wheat production to compensate for Ukrainian and Russian shortages. Although the country, the world’s second largest producer, is historically not an exporter – India is content to export surplus production after domestic consumption – the potential for a good harvest and world prices higher than national prices had pushed the traders for sale in the world market.

But the months of March and April were historically hot in India, largely starting the harvest. Rising temperatures and drought have led to premature ripening and wilting of grains in India’s three major producing states of northern Punjab, Haryana and Uttar Pradesh.

“Instead of the expected 110 or 115 million tonnes of wheat, production in India is ultimately only envisaged at 95 million tonnes,” explains Nathan Cordier. A “drastic fall” which risks jeopardizing the country’s food security and which prompted its Prime Minister, Narendra Modi, to impose, on Saturday, May 14, an embargo on wheat exports.

It was following this announcement that the price of wheat shattered its record, closing Monday evening at 438.25 euros per tonne on the European market for a close delivery. Ten days earlier, the Indian Prime Minister had assured his Western counterparts that India would “feed the world”, forecasting the export of 10 million tonnes of wheat in 2022, against 7.21 million tonnes in 2021 and 2.15 million in 2020.

Finally, France, the leading wheat exporter in Europe, is also experiencing an intense and early drought, which occurs in the crucial and water-intensive phase of grain growth. In 2021, French production amounted to 35.5 million tonnes of wheat, i.e. 27% of European flows.

Two months before the harvest, it is still too early to know to what extent French production will be affected. But professional organizations, as well as the government, have already issued alerts. While the month of April recorded a rainfall deficit of 25%, the spring drought “will have an impact on cereal production”, had thus warned, on May 9, the ministries of agriculture and ecological transition . “No region is spared”, had abounded the National Federation of Farmers’ Unions (FNSEA), quantifying “up to 40%” the loss of yield “if the weather remained dry for several weeks”.

If France’s food security is not in danger, according to Agritel, these concerns about yields are still weighing on the world wheat market, supporting a high price. Faced with all these constraints, the market “anticipates” the crisis, continues the analyst, and tries to “ration by price to cut demand” and thus regain equilibrium with a falling supply.

If the French harvests are indeed poor, the market “could well increase further” and the low supply could, in the long term, jeopardize the global food balance and “cause new hunger riots” in certain very dependent on wheat imports, he concludes.

Without waiting for the next campaign, the United Nations is trying to secure supplies for the most fragile countries, and the United States hopes to convince India to “reconsider its decision” to embargo. The World Bank will also devote over the next fifteen months some 12 billion dollars (11.3 billion euros) to the fight against food insecurity.

Much of this sum will go to countries in Africa, the Middle East, Eastern Europe and Central and South Asia, the institution said. Somalia, Pakistan, Egypt and Lebanon are among the countries most dependent on Russian and Ukrainian cereal production. Bangladesh is the recipient of half of the quantities of wheat exported by India.

News Editor - May 21, 2022 0
The Boeing capsule, Starliner, docked with the International Space Station (ISS) for the first time on the night of Friday May 20 to Saturday...