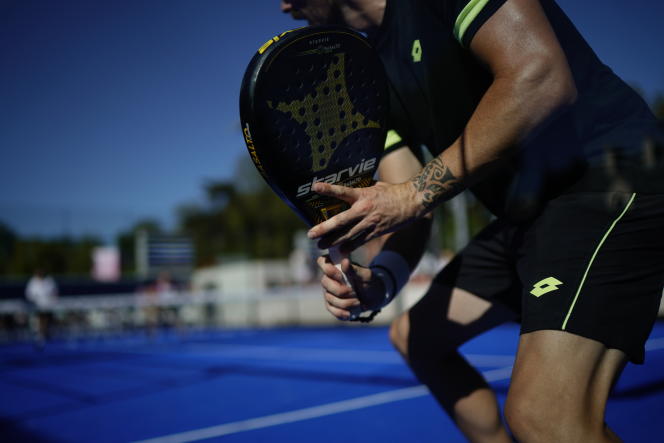 From July 11 to 17, Roland-Garros will reduce the size of its courts and the players that of their racket to host a “Grand Slam” of padel, a discipline halfway between tennis and squash, affiliated to the French Federation of tennis (FFT).

The Paris Premier Padel Major is one of the main tournaments of the Premier Padel circuit, launched in April and financed by Qatar Sports Investments, the structure of PSG president Nasser Al-Khelaïfi. Thanks to this showcase, the director of the tournament and of the padel mission at the FFT, Arnaud Di Pasquale, hopes to “give a boost to the development of the discipline” in France and internationally.

There are almost 300,000 practitioners. It is complicated to precisely quantify the number of licensees because there is, for the moment, only a single tennis license which allows you to also compete in padel competitions. At the start of the school year, we will launch a license for this single discipline, at 20 euros, in addition to a multi-racket license (at 32 euros). The objective, by 2024, is to reach 500,000 practitioners and to double the number of tracks [the name given to the fields] to reach two thousand. Our priority is to develop equipment. Demand is very strong, many clubs are saturated, especially in Provence-Alpes-Côte d’Azur (PACA) and Occitanie, the most dynamic regions.

The challenge is to convince communities to put money into a sport that still lacks notoriety. Support is provided in two ways: by the National Sports Agency and the “5,000 equipment” program [announced by the President of the Republic at the end of 2021, aimed at supporting the development of five thousand sports fields by 2024] which provides for the creation of five hundred padel tracks, financed, according to eligibility criteria, between 50% and 80% by the State and up to 100% for overseas territories. For its part, the FFT provides aid for the development of clubs and practice (ADCP), which accompanies all its disciplines, including padel.

We are at the beginning of an adventure that began fifty years ago in Spain and South America, mainly in Argentina. In Europe, the discipline has made a leap in Belgium and Switzerland, but also in Italy and Sweden, the latter two countries having more than 500,000 practitioners each.

In France, there were already tracks in the early 2000s in Occitanie and PACA, but it was then confidential. Very slow at the start, the curve is exploding: in the last three years, we are between 25% and 50% increase per year. When you see how playful, accessible, spectacular and despite everything sportingly rigorous the discipline is, it’s hard to understand why it took so long for us to click. Next door, Spain has more than 11,000 tracks and nearly six million practitioners.

We tend to decry tennis because the high level is doing less well at the moment, but for the rest, the sport is doing very well: we have just crossed the threshold of one million licensees [which had not been reached since September 2017]. But I don’t believe for a second in a potential “cannibalization” of tennis by padel. Now, more than 60% of padel players are not from tennis, when at the start, 80% were from it.

We also recover those who are called “abandonnists”, namely all the young people who, in adolescence, have chosen a sport other than tennis or have stopped sport because of their studies, and return to sport with the padel. Ditto for the 30s or 40s who have started a family and for whom it is complicated to continue to play tennis tournaments. Padel is less competition and more leisure.

At some point we have to take risks, we saw the train go by, we decided to get on it. We had three months to organize this event, the timing is very tight, we are lucky that partners from the Roland-Garros [tennis] tournament are following us. In a year, we will see more clearly.

We will accept to lose money at the beginning, but the idea is to be profitable within three years [the duration of the contract]. The objective is to be part of the long term and to place padel in another dimension in France. But not only, it goes beyond the national framework.

The Premier Padel circuit has just signed an agreement with Canal, which will therefore broadcast the tournament. It may be presumptuous but it is the Roland-Garros stadium, a sumptuous setting that speaks to everyone. We also want to offer an experience at very affordable prices, places will be between 15 euros and 50 euros per day.

The World Padel Tour [WPT, launched in 2013] is a closed circuit. The Premier Padel circuit is placed under the aegis of the International Padel Federation (FIP), to which the FFT is affiliated. It was consistent to follow the FIP on this new circuit. The players have contracts with the WPT which run until the end of 2023. But one of the major objectives is that then there is only one circuit to gain clarity.

The best players support the Premier Padel circuit: the reception conditions are different, the prize money [endowments] are higher, the visibility is greater. To date, the circuit has ten tournaments including four “Majors”: Doha, Rome, Paris and Mexico. From 2024, there will be more than twenty.