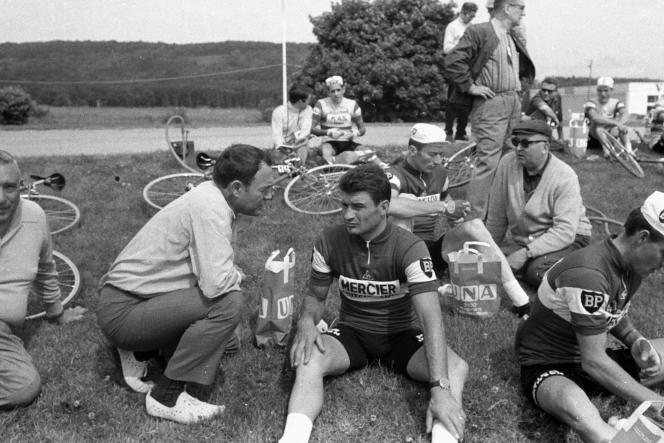 Three days before the start of the 109th edition, on July 1 in Copenhagen (Denmark), France 2 is launching “its” Tour de France. This special evening, rich in cult archives and hosted by Leïla Kaddour and Laurent Ruquier, takes the race in its most popular and heritage dimension. If, at the turn of an archive, Emmanuel Macron evokes in 2019 “a French mythology” by referring to Roland Barthes, the story is careful of any philosophical or even critical vision.

The documentary puts this “July Republic” into images – its faces, its colors, its emotions and its memories. At random, we see General de Gaulle almost as a simple spectator as the peloton passes through his town of Colombey-les-Deux-Eglises (Haute-Marne) in 1960, the parade of Hollywood stars during the years of reign (erased since ) by Lance Armstrong or a Raymond Poulidor frozen in his role of eternal second to receive the kiss of a Jacques Anquetil letting go: “You make a beautiful loser. “Only classic.

Each shot, each comment recalls the idea of ​​an event which is first and foremost a great moment of popular communion transcending classes and generations. The race itself is never just one element among others. Ranking maniacs can go their way. This “great saga” is aimed at a wide audience, those who sit on their sofa every summer as much for this France now seen from a helicopter – but never ugly or peri-urban – as to encourage Julian Alaphilippe or curse the bad luck of Thibaut Pinot .

The fact remains that the beauty of the images and the richness of the archives manage to make us forget this very didactic side. Some even manage to tell another reality, less polished. In the part on the yellow jersey, we are seized by this period micro-sidewalk where spectators spit their hatred of Eddy Merckx, monarch too Belgian and too sure of himself for their taste. Further on, we see the five-time winner of the event face to face with this Dupont-la-Joie who hit him in the liver on the climb to Puy-de-Dôme in 1975. Confused, he then becomes very small ( “I didn’t even touch it”).

At this point, the documentary touches on what cycling is. A hard, mean and, sometimes, unfair sport where the spectator has the freedom to wait for hours in the lace of a pass to encourage or insult, for free, a champion.

The Tour may have become a postcard, but the fact remains that the emotion always arises from the race. In the part about Poulidor, even those who know their history of cycling and the genealogy of Limousin (deceased in 2019), are overtaken by emotion when a tearful Mathieu van der Poel dedicates his yellow jersey, on the last Tour, to “[his] grandfather” – who had never worn it.