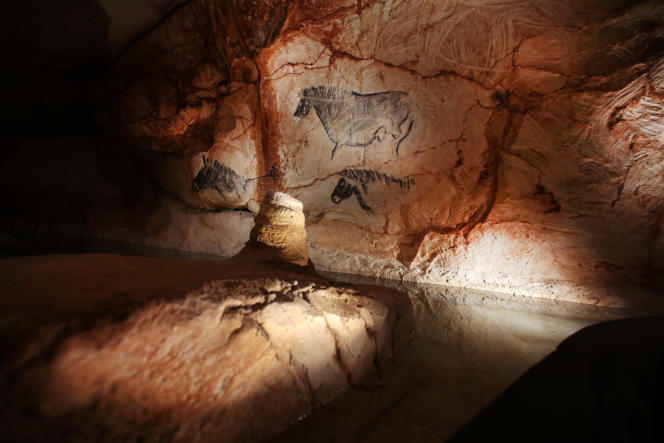 You have to imagine Marseille before Marseille, long before. 33,000 years ago, in the middle of the ice age. With sea and ocean levels 135 meters lower, the shore was several kilometers away and the creeks were cliffs overlooking a steppe roamed by horses, bison, megaloceros – the largest deer ever known – and where you could see also great auks, a now extinct species whose individuals were 80 centimeters tall. There, at the foot of what is today the Calanque de la Triperie, a passage opened leading to a cave that the humans of the time occupied and adorned during several phases, until 19,000 years ago, including leaving paintings and engravings galore.

Then the weather warmed up. Then the sea came back and the water rose, rose, so much so that the gut filled with water, that the cave was largely submerged and fell into the greatest oblivion. Until that day in 1985 when, at a depth of 37 meters, the diver Henri Cosquer found his way back in. For a long time he made it his secret garden, visiting the cave from time to time – without, for years, being able to distinguish the paintings – and ended up declaring the discovery in 1991, following the accidental death of three divers. . The Cosquer cave was born but remained inaccessible and only researchers could enter to study it.

Today, it comes out of the invisible thanks to its “copy”, a very faithful replica which opens its doors in Marseille on Saturday June 4th. A “restitution”, in the official terminology, in the sense that it is not a perfect duplicate. For two main reasons. First of all, the topography of the original cave is such that it is sometimes necessary to crawl, sometimes to climb, to see the different parts of it: unthinkable to impose such an obstacle course on visitors. Second reason: the facsimile is installed on level – 2 of an existing building, the Villa Méditerranée, designed by the Italian architect Stefano Boeri and which has never proved its usefulness since its inauguration in 2013. To bring in the 2,300 square meters of Cosquer in the 1,750 square meters of this basement, it was necessary to compose, juggle with the supporting structures of the building and the security requirements. Do a bit of copy-paste with the different spaces in the cave.

On the other hand, no compromise on the accuracy of the works. The walls of Cosquer were photographed, scanned, digitized to be reproduced identically thanks to resin panels on which the artists then recreated the horses, ibexes, saiga antelopes, penguins, as well as the multitude of “negative” hands , these stencils where only the outline of the fingers is expressed. But the greatest fidelity would not work if the atmosphere of the cave, which contributes to the emotion, was not well rendered. The result is there, thanks to the know-how of Stéphane Gérard, a visual artist specializing in the restitution of concretions, all these stalactites, stalagmites, mineral draperies and other fistulae which manifest the mineral life of Cosquer.

And the visitor in all of this? Headphones on the ears, it takes place, in groups of six people, in small electric modules that vaguely recall the vehicles of certain fairground attractions. These automatic carts move slowly along the 220 meters of the route, part of which takes place between basins reminding us that water is one of the central elements of the cave. The modules are oriented towards all the points of interest, the most subtle of which, such as the engravings, are “highlighted” with the help of light effects. Thus becomes evident what does not appear at first glance, like those features that cross the body of certain animals. Could it be arrows?

This question and many others emerge during this journey, almost initiatory, of thirty-five minutes. Why are so many knuckles missing on negative hands? Were they amputated or folded? Did these often small hands belong to women or to teenagers? What are those strange zigzag signs? Without forgetting the traditional questions that arise during any visit to a decorated cave: is it art in the sense that we understand it, and why go to draw, engrave, paint in corners that are sometimes difficult to access?

And one cannot help but think back to the feeling that must have gripped Henri Cosquer on the day in 1990 when, after he had put down his lamp, the beam illuminated a red negative hand, the first painting he distinguished five years ago. after discovering the cave… When asked what he felt at that precise moment, the somewhat gruff diver replies in his Marseille accent impossible to transcribe here: “I thought to myself: ‘Damn, who is who? come tag in there?” »