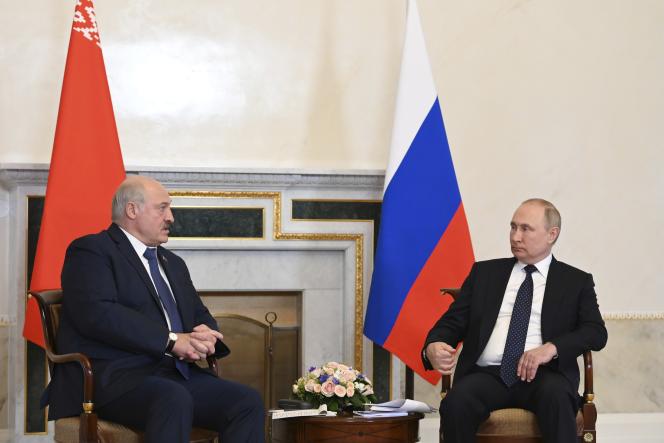 On February 24, it was with troops from Belarus, in particular, that Russia invaded Ukraine. Four months later, the regime of Alexander Lukashenko has never been so dependent on Russian President Vladimir Putin, to whom it owes its political survival after his disputed re-election in August 2020. The Belarusian territory, which provides Russia with all the infrastructure necessary to conduct its war, now serves as a rear base for the head of the Kremlin.

A few hours before a meeting between the two leaders, Saturday, June 25 in Saint Petersburg, it was again from Belarus that around twenty Russian rockets were fired towards the Ukrainian military base of Desna. Kyiv reacted by accusing Moscow of wanting to “draw” Minsk into the conflict.

At the risk of aggravating tensions with Europe and the United States, Vladimir Putin announced, the same day, the delivery, “in the coming months”, to the territory of his neighbour, of Iskander-M missiles, capable of to carry nuclear charges. A prospect made possible by the new Belarusian Constitution, adopted after a sham referendum on February 27, and which does away with the obligation imposed on Belarus to remain a “nuclear-free zone”.

“Having nuclear weapons has been Lukashenko’s dream for a long time,” said Franak Viacorka, a close adviser to the representative of the Belarusian opposition in exile, Svetlana Tsikhanovskaïa. But if he gets them, he will become too powerful in the eyes of the Kremlin. Putin will have to find a trick so that Lukashenko does not have control of it and thus remains his puppet. »

The invasion of Ukraine increased the vassalization of Belarus vis-à-vis Russia. The process is also reinforced by the sanctions imposed by the European Union on the Minsk regime, targeted measures against twenty-two senior officials, and trade restrictions. The former Soviet republic, already punished after the fraudulent re-election of Mr. Lukashenko, also lost the Ukrainian market, which represented 14% of its exports in 2021.

In a sign of the times, Russian Foreign Minister Sergei Lavrov announced on June 30 the opening of a Russian consulate general in the Belarusian city of Grodno, near the border with Poland and Lithuania, where the 9th Forum of Regions of Belarus and Russia was held until Friday, July 1. Following a meeting with Mr. Lukashenko, Mr. Lavrov stressed their commitment to holding “a coordinated line on the international stage”, and warned Westerners about the “iron curtain” which is “already in crashing” between them and Russia.

But despite its growing subjection to Moscow, Minsk has not sent its men to fight alongside Russian troops in Ukraine. Such a commitment seems, for the time being, unlikely. “The pressure to force Lukashenko to send his soldiers is a bluff,” says Franak Viacorka. The Belarusian army is inexperienced and poorly motivated. Providing the infrastructure and logistics necessary for the war effort is much more effective than sending a few thousand refractory soldiers to their deaths. What matters is Lukashenko’s loyalty. »

For Vladimir Putin, the price to pay to ensure this is low. “He needs a billion euros a day to wage war in Ukraine, but only a billion euros a month to fund Lukashenko,” Viacorka continues. Sending the army would be all the more risky for Mr. Lukashenko since the invasion of Ukraine is very unpopular among Belarusians. According to a study by the Chatham House think tank, only 6% of them want the army to go to war on the side of the Russians. “Lukashenko is playing the role that Putin has assigned to him, but he is afraid of triggering new demonstrations if he ever sends troops,” Pavel Sapelko, of the Belarusian human rights NGO Viasna, told Le Monde.

His rigged re-election on August 9, 2020 sparked unprecedented protests in Belarus. The movement, violently repressed, gave way to a climate of terror which still persists today in the country, where 1,238 political prisoners are incarcerated, according to Viasna. In the aftermath of the Russian invasion of Ukraine, a thousand Belarusians still dared to take to the streets again. “More than 700 of them were immediately arrested, beaten and tortured,” said Pavel Sapelko. Lawsuits have also been filed against them. They were each sentenced to between fifteen and forty-five days in prison. »

The criminalization of Belarusian resistance to the Russian offensive has been further tightened with the adoption of amendments to the criminal code allowing to label as “terrorists” those who sabotage the railways, on which Moscow depends to transport its material. to Ukraine. They now face the death penalty.

The massive opposition of the Belarusian population to the war and the active resistance of part of it – including going to fight alongside the Ukrainians in the Belarusian battalion Kastous-Kalinowski – do not prevent it from be considered a “co-aggressor”. A “Belarussophobia”, against which the Belarusian diaspora tries to fight, has thus emerged due to the “complicity of the Belarusian state in the Russian aggression of Ukraine”, notes a recent report by the Friedrich Ebert Foundation.

Those who risked their lives to try to overthrow Mr. Lukashenko also regret paying the price for the sanctions voted against Belarus, considering themselves “unjustly punished for the crimes of a regime they are fighting”. Overnight, the bank accounts of Belarusian refugees in Ukraine were frozen. European countries have restricted their right to apply for Schengen visas and residence permits. And most of the Belarusian exiles who lived in Ukraine before the invasion and had to flee the war, could not benefit from the protection mechanisms available to Ukrainian citizens in the European Union. “It is unfair, believes Mr. Pavelko, because it is not the Belarusian people who are responsible for this war, but Lukashenko, for whom the people did not vote. »

The Chinese cheesecloth, a sieve that wants you well

With the invasion of Ukraine, the accelerated vassalization of Belarus by...