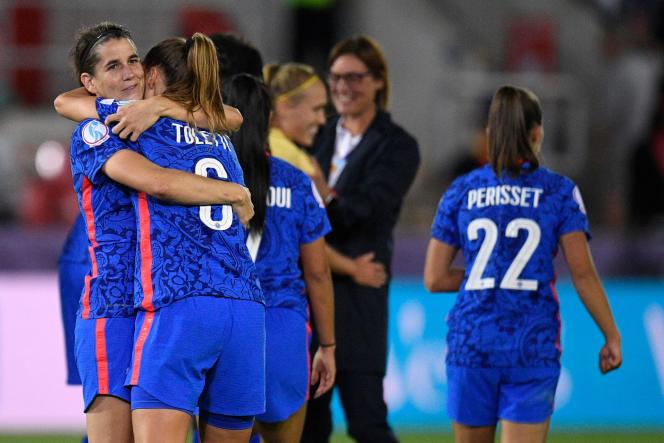 Corinne Deacon’s Bleues qualified with difficulty against Belgium on Thursday 14 July. Insolent ease four days earlier against Italy (5-1), the French have this time fought to the end to dispose of Belgium (2-1), yet the lowest ranked nation in Group D at the FIFA ranking (19th). “We knew that we wouldn’t put five to Belgium tonight, but we still managed to win this match, and that’s the main thing”, summed up Corinne Deacon laconically after the meeting. .

The good old adage says you shouldn’t change a winning team. The coach has however made two tactical readjustments, with the return of Griedge Mbock in defense, a surprising last-minute substitute during the previous meeting, and the tenure of Clara Mateo in midfield. Changes made with a view to “affecting as many players as possible and trying to bring a little freshness to the start of the match”, according to Corinne Deacon.

This remodeling had no impact on the French dynamic at the start of the game, Kadidiatou Diani opening the scoring with a header into the area from the 6th minute. But, then, if Kadidiatou Diani and, above all, Delphine Cascarino, elected player of the match, multiplied the calls behind the defense, the French, despite numerous attempts (27 shots, against 2 opposing strikes), missed precision in the last gesture.

Often braced in their half of the field, the Belgians came back to score on one of their rare incursions into the opposing field: Janice Cayman tore away in front of her teammate in Lyon, Wendie Renard, to tackle with her toe right the ball in the goal of Pauline Peyraud-Magnin (36th).

If this equalization appeared as a surprise as the French women controlled the game, an unexpected event a few minutes earlier drew the outlines of a laborious evening. Announced Euro star Marie-Antoinette Katoto stopped her race in the 12th minute, limping on a French attack, before collapsing on the lawn seconds later, grimacing in pain.

Out in the 17th minute, the Paris-Saint-Germain center-forward reappeared at the break on crutches, with a huge bag of ice on his right knee. It was from the bench that she saw Griedge Mbock’s goal with a header (40th), allowing the Blues to regain a definitive advantage.

Touched in the same place in training the day before, Marie-Antoinette Katoto suffered a sprained knee. If she had nothing left on her joint at the final whistle, it was a player marked on her face who spun along the corridor of the mixed zone, escorted by her teammate Kenza Dali. His future for the rest of the Euro is up in the air.

“She has a game profile that is important to us. Back to goal, she is able to keep the balls, thanks to her technical quality and her size in the area. Of course losing her would be difficult for us,” recalls captain Wendie Renard, who missed the ball 3-1 with a shot on goal saved by goalkeeper Nicky Evrard at the very end of the match (89th), before to make an incredible miss with the left foot in front of the wide open cage.

Heading for quarters in pain

More generally, the Habs struggled in the construction of actions, displaying technical waste and signs of physical wear never seen before. If the Belgians only hit Pauline Peyraud-Magnin’s goal once in the second half, the latter believed in the gag goal after a disagreement with her captain, Wendie Renard, on a cross from the right (84th) .

Despite a slow end to the game, France is the third nation officially qualified for the quarter-finals, after England and Germany. Contract completed for the third nation in the FIFA rankings, which will return to a stage of the competition that it has never reached in its history. Les Bleues got their ticket to the top eight in just one hundred and eighty minutes, after two completely different matches.

“We’re going to savor and recover. We must take advantage of the joyful moments when they arise. It’s rare to qualify after two matches,” said Corinne Deacon. Back in the evening at their base camp in Ashby-de-la-Zouch, the coach and her staff will take stock of the injuries, before planning the last group match, against Iceland, Monday 18 July.

“It’s one less pressure for the game against Iceland and it’s a goal achieved. It bodes well for the future, we are on the right track,” smiles Delphine Cascarino. Guaranteed to finish first in Group D, the French team will play a fourth game in a row in Rotherham, for its quarter-final, on the evening of July 23. To, perhaps, taste the first thrills of a qualification for the last four of a Euro.