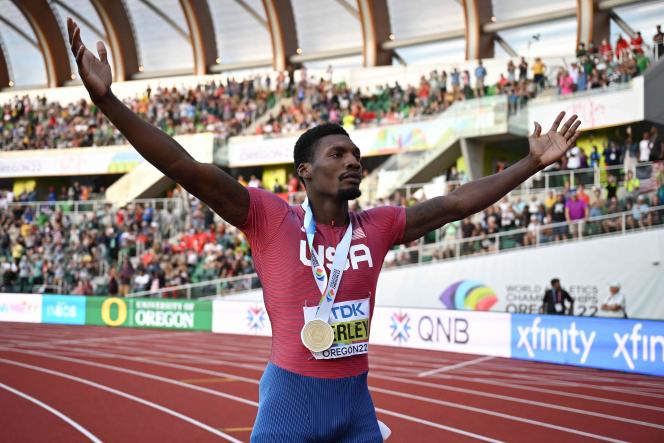 “I want to be a legend, like Usain Bolt. Fred Kerley still has work to do to fulfill his ambitions, but he laid the foundation stone on Saturday in Eugene in the 100-meter final. The American sprinter became world champion for the first time in his career with a time of 9.86 seconds. He leads his compatriots Marvin Bracy (9.88 seconds) and Trayvon Bromell (9.88 seconds). The young Jamaican Oblique Seville finished 4th in 9.97 seconds.

Best performer of the season before the start of the Worlds – thanks to a time of 9.76 seconds achieved on this same track at Hayward Field during the Trials at the end of June – Kerley had impressed from the series, setting the time of 9.79 seconds , the fastest series in the history of the world championships. In the semi-final, the Texan was less greedy by winning in 10.02 seconds.

Last year in Tokyo, quiet Kerley won the Olympic silver medal in a surprising – and disappointing – final behind the Italian Marcell Jacobs. A specialist in the 400 meters, the new king of the sprint has made himself known internationally on the lap. In 2019, he finished 3rd in the distance at the Doha Worlds, before opting for an explosive conversion to the 100 meters for the Olympics.

“I see myself first and foremost as a total athlete”

A true Swiss army knife of sprinting, the American started with the 200 meters in high school, before becoming a double champion in the 400 meters at the university level (NCAA) and making it his favorite discipline for his first years as a professional runner. Few people believed in his bet before Tokyo 2021. After his final finished in second position, the NBC commentator illustrated it: “We said that Kerley was crazy, no one is going to say that anymore. The main interested, audacious alchemist, confirmed: “I achieved what people said that I could not achieve. All I want now is to turn silver into gold. »

In 2021, after a victory over the 100 meters at the Brussels meeting, the new world champion in the queen distance was the first to win a victory in the Diamond League over 100 meters, 200 meters and 400 meters. On Twitter, the World Athletics Championships Oregon22 account challenged him: “So… What event are you going to focus on next year? The humorous answer was: “800 meters. Followed by a denial: “No, I’m just joking.” »

Another performance that reinforces his versatility, he is one of three athletes – along with South African Wayde van Niekerk and American Michael Norman – who have run in less than 10 seconds for 100 meters, less than 20 seconds for 200 meters and less 44 seconds in the 400 meters. If the double 100-200 meters (Usain Bolt is the living illustration) or 200-400 meters (Michael Johnson or Marie-José Pérec prove it) are not rare, this ability to be as efficient in the 400 to 100 meters is quite breathtaking.

In a recent interview with L’Equipe, Kerley explained his gift: “I see myself first and foremost as a total athlete, and I think I’m still able to express myself on all three distances,” he said. I am proud of this versatility, no one thought I was capable of it, especially since going down the 100 meters was a last minute choice. That said, the pain at the end of the effort is always present, regardless of the distance! »

Finally individual world champion, Kerley does not want to stop there. If he is not yet the fastest American sprinter of all time – he is still ahead of Tyson Gay (9.69 seconds) and Justin Gatlin (9.74 seconds) – he has a voracious appetite. He wants to tackle the records of the three sprint events.

“I’m not really worried about the American record, there’s another one above [Bolt’s world record]. That’s the one I’m aiming for. You’re not trying to get second place, you’re aiming for the best,” he said. Before driving the point home in an interview with Tokyo 2020 after his Olympic silver medal in 2021: “It is my absolute desire to be the fastest man of all time. »

In March, the “total sprinter” started his season with a 400 meters run in 44.47 seconds. He then decided to focus on the 100 and 200 meters to increase his speed. “My biggest goal is still the 400 meters in the next few years. Now I’m focused on improving my top speed so that I can write history,” he told specialist site FloTrack.

To achieve his goals, the sprinter will need to believe in himself and perhaps he will rely on other beliefs. The man collects tattoos dedicated to his Christian faith: Psalm 104 (praise of divine creation), the Virgin Mary, rosary beads, angel wings, praying hands, a cross and to finish this list à la Prévert, the word “blessed”. An inscription that seems prescient. At 27, the Texan is blessed with the god of speed.