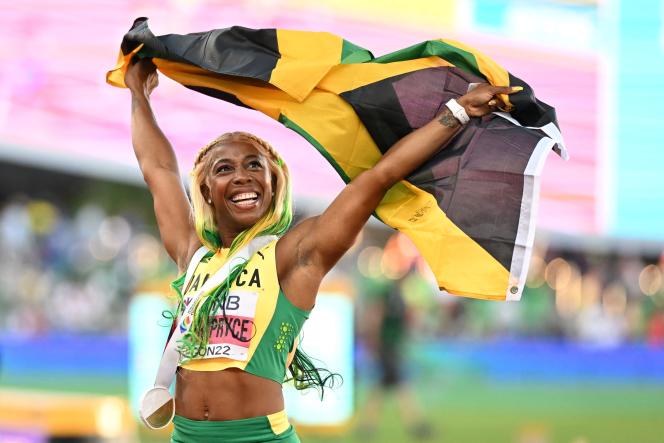 Yellow and green. On Sunday, July 17, this color combination was ubiquitous on the track and around Hayward Field. Firstly because it represents the traditional colors of the University of Oregon on the campus of which the 2022 Worlds are organized. And also because the “yellow” and the “green” are – with the black – the colors Jamaicans who were celebrating in the women’s 100m event.

In Eugene, on the soil of their American rivals, the sprinters from the Caribbean island responded to the sprinters made in the USA, who had achieved a men’s hat-trick the day before over the same distance. Shelly-Ann Fraser-Pryce, Shericka Jackson and Elaine Thompson-Herah succeed, in order and 24 hours apart, Fred Kerley, Marvin Bracy and Trayvon Bromell.

At 35, Shelly-Ann Fraser-Pryce won her tenth world gold medal, with a time of 10.67 seconds. She is now a five-time world champion in the 100 meters. “Mommy rocket”‘s track record is even more impressive with three Olympic golds and four silver medals. Its longevity is just as important: it has reigned over the world sprint since the Beijing Games in 2008 where it had already been crowned for the first time on the straight line.

The exuberant sprinter took her revenge on Elaine Thompson Herah, who had achieved the Olympic double 100-200 meters in 2021 in Japan. At 30, the second all-time performer (10.54 seconds in 2021) and five-time Olympic champion finished in third place, in 10.81 seconds.

The silver medal went to Shericka Jackson, a specialist in the 400m and two-time world champion in the 4x400m relay, who bettered her personal best in 10.73 seconds. The latter, on the other hand, could dominate her two eldest in the 200 meters, an event where she has been, since June 26, the third fastest woman in history thanks to a time of 21.55 seconds.

“Shelly-Ann is an example”

The most anticipated final of these Worlds, the women’s 100m has kept all its promises. The competition and the high level of the women’s sprint relegated the men’s sprint to the background. “The women’s event has really been the queen event since the retirement of Usain Bolt, as Jamaican Juliet Cuthbert, former double world runner-up in the 100m and 200m, points out. Looking at the women last year at the Olympics, we saw how well they performed. This is the race to follow because all the contenders are very close to each other. »

Including the Jamaicans, there were thirteen athletes to go under 10.90 seconds this year. The three world firsts were the only ones to have run even faster, below 10.80 seconds. Among them and before setting the same time in the final, Shelly-Ann Fraser-Pryce had already lowered the clock to 10.67 seconds twice.

In Eugene, the Jamaican supporters were numerous and demonstrative. Flags, jackets, tracksuits and t-shirts from a fashionable outfitter with a perfectly fitting slogan, “forever faster”. One of them, Erica Daily was even hoping for more than a hat-trick a few hours from the final: “Tonight we hope to go first, second, third and fourth!” Unfortunately, the young Kemba Nelson (22) did not make it to the semi-finals.

Regardless, the Caribbean fan is proud of her reps: “Shelly-Ann is well over thirty. Most sprinters stop around this age. She is an example and shows women that it is still possible to be successful. »

Liaison officer with the Jamaican Athletics Federation, Dennis Gordon did not hide his admiration for his sprinters: “They are exceptional. We are privileged as a small nation to produce athletes of this quality. »

“Our sprinters are less present than during the twelve years Bolt dominated the Americans. But we are slowly rebuilding,” he continues. The young Oblique Seville (21) finished 4th in 9.97 seconds, at the foot of the podium on Saturday in the men’s 100 meters.

Fraser-Pryce, Thompson-Herah and Jackson also arouse admiration outside the Jamaican borders. The New Zealand 100m semi-finalist, Edward Osei-Nketia, met in the aisles of the stadium on this “Jamaican day”, marveled: “The Jamaicans, especially Fraser-Pryce and Thompson, have been excellent for years and years. They are super fast and they pull each other up. Maybe we’ll see a world record broken tonight…”

Despite the emulation of this fierce competition and an ultra-fast final, the world record of the American Florence Griffith-Joyner did not fall. On July 16, 1988 in Indianapolis, the controversial sprinter stunned the world by running in 10.49 seconds. On the famously fast track at Hayward Field and with the addition of new shoe and spike technology, this performance seemed within reach of sprint queens.

Juliet Cuthbert firmly believes in it: “They are all capable of running in 10.60 seconds or 10.50. Before, we thought this record was unreachable. At one point, we thought that Merlene [Ottey, fourteen world medals in sprint] was capable of it with a favorable wind, analyzes the one who holds the post of Minister of Health. With their recent performances, it becomes accessible to Thompson and Fraser-Pryce…”

In June, the latter assumed her ambition: “I really believe that I can run faster. That’s what really drives me,” she told Le Monde. To permanently replace Usain Bolt in the hearts of Jamaicans and fans, the world champion knows what she has to do.

News Editor - July 18, 2022 0
Yellow and green. On Sunday, July 17, this color combination was ubiquitous on the track and around Hayward Field. Firstly because it represents the...