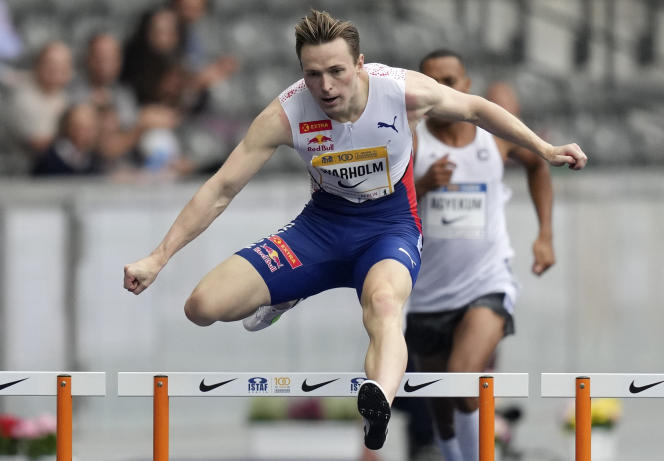 In 2021, Karsten Warholm became Olympic champion in the 400 meter hurdles in Tokyo, beating the world record in the final (45 s 94). Injured on June 5 in a meeting in Rabat (Morocco), the 26-year-old Norwegian will nevertheless try to defend his world title in Eugene from the playoffs, scheduled for Saturday July 16. “I feel like I haven’t done everything I could do yet,” he said in an interview with Le Monde, made a few days before this injury.

Everything I ever wanted has come true. It’s a lot to digest but it’s also fantastic. I only took a week off. Top sport works like this: work to stay on top. 2021 will be a career-defining year.

I’m still young. There are still many years where I can perform well. At the same time, I have already achieved all possible goals. So my current motivation is probably more similar to what I had when I started playing this sport. I want to see how good I can be and I feel like I haven’t done everything I could do yet.

Winning the gold medal in London was a game changer in my life and career. I understood that great things were accessible to me. I remember that after my victory, a Norwegian newspaper pointed out that it was a slow time. After that, I started working, working and working. I wanted to recreate that moment. Then, very strong competitors arrived. We pulled each other up. You should also know that before 2016 I had not done 400m hurdles, because I was a decathlete. In 2017, I was therefore very new in this discipline.

That’s right, it’s a Nike World Championship. With Puma, we have developed good equipment. I think it will scare a lot of people. It is essential for me to try to always be in a position where I can win. If I don’t, it’s a lack of respect for my competitors. It won’t be easy for them and it probably won’t be easy for me either.

It is a blessing. I’m grateful. Rai [Benjamin] pushed me towards a better time. Even though there is a rivalry, there is also a lot of respect. I hope everyone is excited to watch the 400m hurdles in Eugene, because it’s going to be something!

With experience, we learn to choose these moments. I’m the type of guy who likes to run when he feels fit. This year, everything is played on the championships, world first and then European [in Munich, in August].

Ada is a wonderful girl. In the fjords you grow up in difficult conditions. It’s cold, it’s raining, it’s windy. But we learn to be creative from a very young age. There are many things that have made me stronger. Many of my competitors grew up with the sun and always had good weather to train with. But I found other ways. It’s one of my secrets. It is a mentality that takes me further. I run a bit with an attitude forged by the harsh climate in which I grew up [smiles].

Leif [Olav Alnes] is very good at that. Training under him has been a blessing because he knows what to do. He keeps telling me: Don’t focus too much on all the things you’re bad at because it’s the things you’re good at that will win you races. Of course, we also work on my weaknesses, trying to improve them, but not to the detriment of the strong points.

It’s an honor to be in the company of these guys. They had a huge impact on the sport and people still talk about their records and what they achieved. I hope people will continue to appreciate what I have achieved for years to come. I want to do my best to continue to write my name in the annals.

Yes and no. Obviously Norway is a small country and there are advantages to coming from a bigger country. No matter what sport you play, I think you are always more famous in your home country. But in Norway we get a lot of attention as sports people. Right now athletics is probably one of the biggest sports in Norway. It makes it easier for me to find sponsors.

Interest is a very fascinating thing. You can’t force people to be interested in something. Track and field is a great sport: you can throw, you can jump, you can run. The lack of interest is not fair or unfair, but it requires working on it in the future to change things.