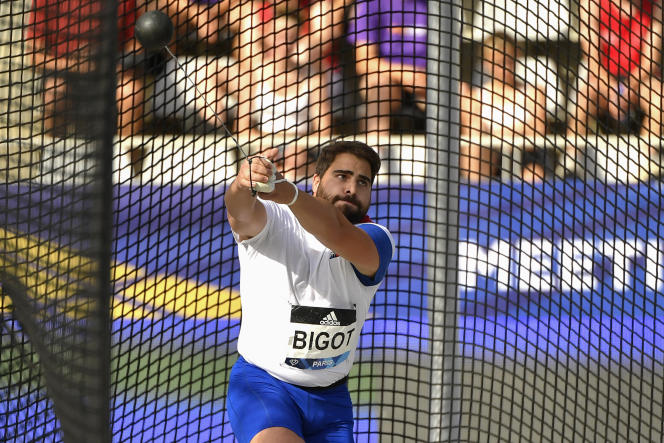 In Eugene (Oregon) on July 16, in the hammer throw final, Quentin Bigot will be one of the main chances for French medals at the world athletics championships. As he has been regularly since the London Worlds in 2017, where he failed at the foot of the podium.

Vice-world champion in 2019, 5th at the Tokyo Olympics, the Messin, who qualified Friday July 15 for the final of the Worlds with a throw of 77.95 m, has become a safe bet in his discipline. A performance far from easy, as the general level of the hammer throw continues to progress.

If, in 2016, the Olympic champion Dilshod Nazarov had been crowned in Rio with a throw of 78.68 meters, five years later, in Japan, the Pole Wojciech Nowicki was crowned by achieving 82.52 meters, beating his personal best. Quentin Bigot then missed a second medal in a major championship despite a throw at 79.39 meters.

As early as 2019, when Bigot had just won his first world senior award, his coach, Pierre-Jean Vazel, warned him: “I told him: ‘It’s very good 78.19 meters, but it won’t be enough. The wave is rising”, recalls the coach. At the Games, we thought you would have to go 79 meters to make a podium. We were wrong. »

The principal concerned calmly observes this phenomenon: “There was a dip between 2015 and 2018. A new generation has arrived, and the level is rising. ” But not only that, since in the hammer the longevity of the best also maintains competition: “The turnover of athletes is less regular than in other disciplines. Pawel Fajdek was already world champion in 2013. Ten years later, he is still there, ”recalls Quentin Bigot. The Pole has claimed the last four world titles.

“There are more young pitchers, so the level is rising. It pushes me to have more motivation, to work more in order to become better, “confirms another leading Polish throwing player, Wojciech Nowicki, reigning Olympic champion, met before his victory at the Paris meeting on June 18. At 33, the latter, who collected bronze medals (three world, one European and one Olympic), reached full maturity. This year, he leads the tally with 81.58 meters and has thrown five times over 80 meters in eight outings.

“It forces you to look for improvements wherever you can,” notes Pierre-Jean Vazel. That’s what everyone is doing right now, and it’s pulling up. Quentin Bigot, who says he “continues to progress every year”, is up to the challenge for now. This year, he has twice exceeded 80 meters in five competitions, managing to improve his personal best on June 5 in Chorzow (Poland).

But, despite a throw measured at 80.55 meters, he is in 4th place in the balance sheets. And on Hayward Field, in Eugene, the best French thrower knows it: you don’t have to be below 80 meters to claim a reward: there are currently eight throwers between 79.86 meters and 81.58 meters.

If the hammer throwing competitions give rise to strong competition, the discipline remains absent from the program of the Diamond League, a circuit which brings together the biggest athletics meetings in the world. However, things are starting to change. In June, the hammer figured in the “pre-program” of the stages in Oslo and Paris.

“It’s a positive sign. I hope the boss of World Athletics realizes that throwers are more and more attractive, because I think people like to see how the hammer can fly so far,” remarked Wojciech Nowicki.

Quentin Bigot is campaigning for full integration of the hammer into the Diamond League program. “At the Chorzow meeting in early August [which replaces the Chinese stages canceled due to Covid-19], we will be considered like the others, he says. In Paris or Oslo, we did not have the same bonuses. We are not worse or better than the 100 meters. Whether it pays more or less to the sponsors is another problem. We are a discipline of athletics like any other. »

The champion rejects the arguments put forward by international bodies, which consider the throwing of the hammer as too dangerous an event to appear in major meetings, unlike the javelin or the discus. “It’s bad faith. We remember the javelin planted in the ribs of Salim Sdiri [in 2007 in Rome]. I do not think we have in mind someone who takes a hammer in the face, he pleads. It has happened before in history, but not in major championships or major meetings. »

In Eugene, it is through more peaceful means – such as a high-flying contest – that the hammer throwers hope to impress the public and convince the decision-makers.