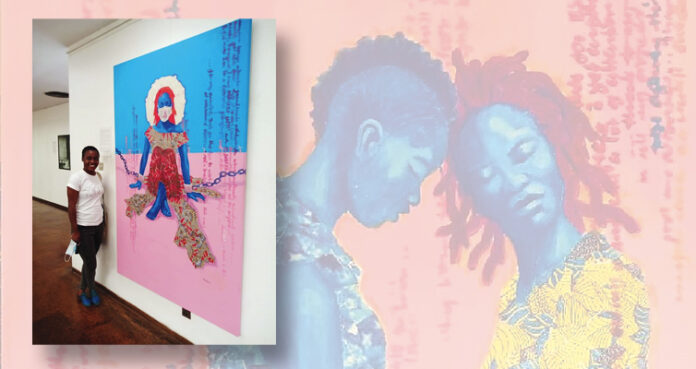 The trend for paper money isn’t just polymer. Artists claim that keeping rubbish out of landfills is an ecological benefit. Artists have created cottage industries in Zimbabwe and Venezuela that transform paper bills into art.

Although Zimbabwe lost its currency in 2009, most of it was thrown away. However, there are still mounds of it that Chimutuwah uses to create art.

Chimutuwah stated to the news agency that many people react negatively when they see old bank notes. I want people to see the beauty in these bank notes. When someone sees this artwork, they are able to say “Whoa!” and forget all the pain it has caused.

She hopes people will see beyond the corruption of former President Robert Mugabe, find beauty in the currency that is a nightmare memory for most, as well as recover from the trauma he caused.

Her paintings are about women’s lives — cooking, dancing and elegantly dressed in vibrantly colored, beautiful dresses. The old Zimbabwean dollars are not used as canvas, but instead she sticks them onto a background painted with glue to make the image.

Blue is the predominant color in her work, as she calls it “a symbol for strength and dominance.”

In one painting, a woman is shown pouring liquid from a calabash (a type of gourd), which is made up of pieces of brown 1,000- and 50-billion-Zimbabwe-dollar notes. A woman is wearing a purple 500 million Zimbabwe dollars note-backed mask and blouse in another message, which is especially relevant today. Artist’s intention is to demonstrate the “new normal”, of social distancing and masks.

A month-long exhibit featuring some of her work is currently on display at the National Gallery of Zimbabwe, Harare.