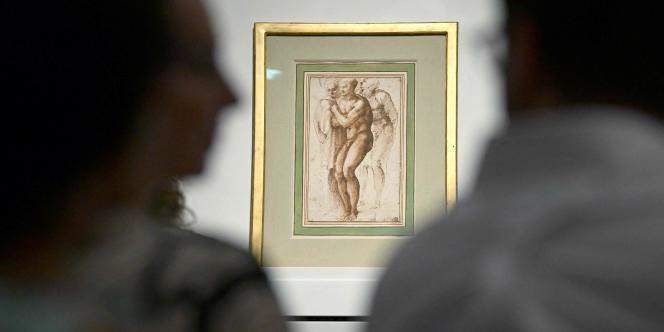 A drawing by the Florentine sculptor and painter Michelangelo was sold for 23 million euros, with buyer’s costs, on Wednesday May 18, at Christie’s Paris. This is a record for a drawing by the Italian master, according to the auction house.

Dating from the late 15th century, this drawing of a standing naked man framed by two other figures in the background was done in pen and brown ink.

It had been put on sale in 1907 at the Hotel Drouot, in Paris, under the classification “school of Michelangelo”, before being attributed to the master in 2019 only, as part of an inventory for a private collection. French.

This auction exceeds the record reached for a drawing by the famous Florentine artist, set so far in July 2000 by the Christ of Minerva (8.1 million pounds, or 9.5 million euros) at Christie’s London , according to the auction house.

The dimensions of an A4 sheet, the drawing sold on Wednesday seems to be inspired by a fresco by the painter Masaccio (The Baptism of the Neophytes) and illustrates Michelangelo’s interest in the representation of the male body.

In September 2019, it was declared a “national treasure” for French heritage, which prohibits any exit from the national territory for thirty months and gives the State and its museums the opportunity to buy it back.