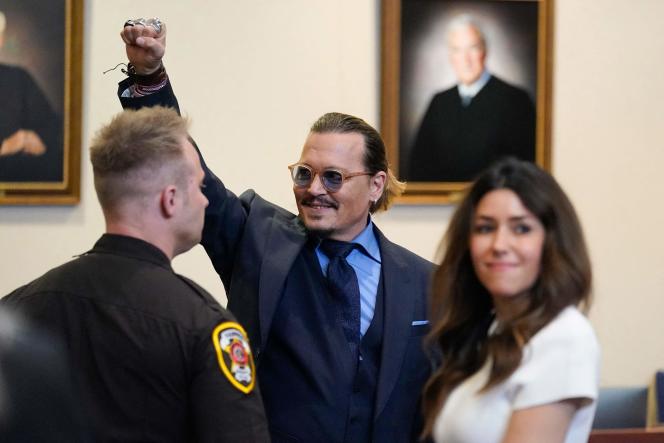 Actress Amber Heard defamed her ex-husband Johnny Depp by describing herself as a victim of domestic violence, the jury of an American court decided on Wednesday, June 1 after an ultra-high-profile trial. Ms. Heard was therefore ordered to pay him $15 million in damages.

The seven jurors – five men and two women – answered in the affirmative when asked whether the title and two passages of a column, published by the Washington Post in 2018 and signed by Amber Heard, contained defamatory remarks with regard to Johnny Depp, according to the reading of their decision.

In a counter-claim, the 36-year-old actress claimed she was defamed by a former lawyer for her ex-husband, who called her domestic violence accusations a “set-up” in April 2020. The jurors agreed with Mrs. Heard on this point, and awarded her $2 million. After the verdict was announced, the actress, “devastated”, expressed her “inexpressible disappointment”. Johnny Depp has claimed that “the jury gave [him] back his life”.

A forum published in 2018 in question

The ‘Pirates of the Caribbean’ star sued his ex-wife for an op-ed in which she said she was “a public figure representing domestic violence.” Although he is not named, Johnny Depp believed that this media outlet had destroyed his career and his reputation, and claimed 50 million dollars. For his part, Amber Heard had made a counter-demand for the remarks of Mr. Depp’s former lawyer, Adam Waldman, asking for 100 million dollars.

Three passages from the platform of Amber Heard and three statements from Mr. Waldman were concerned. Jurors had to determine whether each passage was defamatory. And to award damages, they also judged whether the author of the statements had acted out of “actual malice”, knowing them to be false or whether they were made in defiance of the truth, a legal subtlety concerning public figures in the States. -United.

Johnny Depp was absent for the verdict “due to professional commitments made before the trial,” according to ABC, citing sources close to the actor. After the end of the debates on Friday, he flew to the United Kingdom, where he took part in several concerts of the British singer Jeff Beck in Sheffield and London.

Amber Heard was present in Fairfax. “Your presence shows where your priorities are,” a spokeswoman for the actress said in a statement before the verdict was announced. “Johnny Depp plays guitar in the UK as Amber Heard awaits verdict in Virginia. Depp takes his sneers and lack of seriousness on tour. »

A trial broadcast live on television

The trial, broadcast live on television, resulted in an unpacking of the couple’s private life, in front of millions of viewers around the world. For six weeks, dozens of hours of testimonials and audio or video recordings revealed details of their disputed romantic relationship, far removed from Hollywood glamor, between 2011 and 2016.

The actress said that Johnny Depp became a “monster” under the influence of an explosive cocktail of drugs and alcohol and refused to undergo rehab. He would have raped her with a bottle of alcohol a month after their marriage, in March 2015, in Australia where the actor was filming episode 5 of “Pirates”. That day, Johnny Depp had the end of a finger severed and was hospitalized. He claims it’s because of the glare from a bottle thrown by Amber Heard. She says he hurt himself.

After another argument in May 2016, during which Johnny Depp allegedly threw a phone in her face, she filed for divorce on the grounds of domestic violence. Since then, she says she became the target of a social media smear campaign that wiped out her career. The 58-year-old actor denounced the “staggering” accusations and assured that it was on the contrary his wife who was violent. “No human being is perfect, certainly not, none of us, but never in my life have I committed sexual violence or physical violence,” he said on the stand.

Every day, hundreds of fans gathered in the courtroom and at the entrances to the court to cheer him on. This trial, before a civil chamber, is the second for Johnny Depp, who had already lost his defamation complaint in London in 2020 against the tabloid The Sun, which had called him “violent husband”. The two actors each claim to have lost between 40 and 50 million dollars in fees since the publication of the tribune.