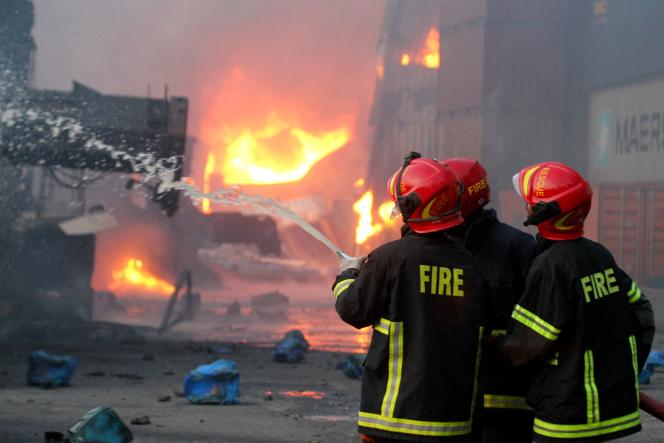 At least 34 people died and more than 300 others were injured on Sunday, June 5, in a fire that triggered a massive explosion of chemicals in a container warehouse in Sitakunda, in southeastern Bangladesh.

According to Elias Chowdhury, the region’s main health official, several people are still missing, including journalists who were covering the fire live. “There are still bodies in the places affected by the fire. I saw eight or ten dead bodies,” one rescuer told the media.

Among the injured are forty firefighters and ten police officers, Chittagong Regional Police Chief Anwar Hossain said. According to him, “the number of deaths is expected to increase, as some of the injured are in critical condition”.

The gigantic explosion shook buildings several kilometers away, witnesses said. “A cylinder flew about half a kilometer from the scene of the fire to land in our small pond,” said Mohgammad Ali, a 60-year-old grocer. “The explosion sent fireballs into the sky. Balls of fire falling like rain. “, he added. “The explosion threw me about ten meters from where I was. My hands and legs are burned,” said Tofael Ahmed, a truck driver who was in the warehouse.

A fire still in progress

The deposit contained hydrogen peroxide, a chemical with multiple industrial uses, said Brigadier General Main Uddin, fire chief. “We still have not been able to bring the fire under control due to the existence of this chemical,” he added. The depot employed about 600 people, according to its director, Mujibur Rahman, who said he did not know the origin of the fire.

Mominur Rahman, the chief administrator of the Chittagong district, announced the opening of an investigation. He also said that about 200 soldiers had been called in as reinforcements, in particular to prevent chemicals from spilling into the sea.

Around 90% of Bangladesh’s approximately $100 billion in annual trade passes through Chittagong. This major port has been experiencing a resurgence of activity since the end of last year thanks to the global economic recovery from the pandemic.

Fires are frequent in Bangladesh, where safety standards are poorly respected. In July 2021, fifty-four people died in a fire at a gigantic food processing plant outside the capital, Dhaka. And in February 2019, seventy people died in another fire that ravaged several apartment buildings in Dhaka.