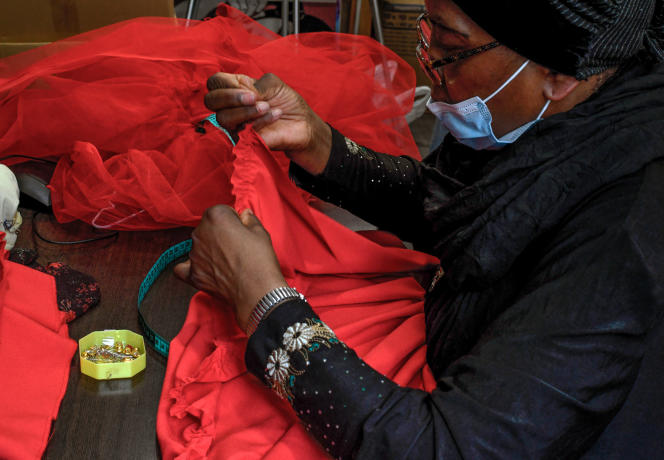 The rhinestones are stored in a dented metal case with the effigy of the Barbapapa. “It’s my daughter’s,” Meriem says, pulling out a bag of particularly sparkling glass beads. She sewed them one by one on the black belt which enhances a sarouel of dark satin. An oriental princess outfit that Meriem is putting the finishing touches to this Friday, June 3 during the pop couture workshop at the Samusocial emergency accommodation center (CHU) on rue Popincourt, in the 11th arrondissement of Paris.

In ten days, on June 13, Meriem and about twenty non-professional seamstresses will wear their creations for a parade in the courtyard of the Palais Galliera, the Fashion Museum. This amateur parade will launch the first edition of Solidarity Week, organized by the public establishment Paris Musées with professionals and volunteers from different sectors of the social field.

Meriem, 33, is from Algeria. She lives in the hotel with her three children, housed by Samusocial. Like every Friday afternoon, she finds Assa Diomande, 26, at the pop couture workshop, two children in France and two children in Ivory Coast, also housed at the neighboring hotel by Samusocial. She also finds there Pascaline, the president of the people accommodated at CHU Popincourt, Asso, 70 years old, Mauritian, a former workshop master who started working at 12 years old, “Madame Sangaré”, whom no one calls by her first name. , 67, assistant in a school canteen, who is busy on a red tulle dress or Jude, stylist, couturier – “pure product of the Fine Arts”, insists this forties -, former resident of CHU Popincourt, who corrects a hem before taking up a lining. “Watch out, Pascaline, if the edges don’t match, the seam winces!” »

They took out the patterns, the pins and the sewing machines, and unpacked the satin coupons and the pieces of gauze on the tables. Everyone is busy, no one is ready. June 13th is tomorrow, and yet it’s so far away! It’s been a long time since the imperatives of the calendar no longer gave cold sweat to these women and men who have experienced the brutality of the street, wandering, hardship, loneliness, a life that is falling to pieces and from which they often prefer not to tell anything. Concentrated on their clothing, they move forward at their own pace, enjoying the calm and the moment without really worrying about the future parade. Meriem has her children to recover, Assa worries about obtaining a residence permit.

The pop couture workshop started with a machine, the one that Annick, social worker at CHU Popincourt, brought to Asso in 2019 so that he could make small alterations to residents’ clothes. Gradually, it became one of the activities supervised by Carine Kafando, animator at CHU Popincourt.

In December 2021, Paris Musées, which has been thinking for a long time about ways to create social ties by giving access to art, offered amateur designers from several emergency accommodation centers the opportunity to join an orderly museum tour around different places. capital in relation to clothing, its representation and its history: the members of the workshop thus visited the Bourdelle Museum, the Carnavalet Museum, the Galliera Palace as well as the exhibition “Anni and Josef Albers. The Art of Life,” at the Museum of Modern Art.

“So that this course is not a bubble of unreality, but a point of attachment in a global logic of insertion, we have thought about how to restore and highlight the skills of the participants, explains Frédérique Leseur, head of the public service at Paris Musées. Initially, we imagined a kind of small exhibition and a sale of accessories. When we understood that it was about clothes, not just bags or clutches, we wanted to go to the parade, not only so that everyone felt the pride of wearing their creation, but also so that everyone appropriates the Palais Galliera. »

Rue Popincourt, it is almost 6 p.m., the workshop is over. Assa carefully folds the long train of a flowing purple dress that highlights her pregnant belly and whose edges she stitched by hand between two subway trips. Annick and Carine are busy under the tables to pick up pins, Madame Sangaré puts away the tulle flounces in a crumpled plastic bag, Pascaline looks for the hanger she came with.

They say they are happy with these shared afternoons. They’re excited to wear their creation, even if they’re a bit worried about being “the center of attention” that day. But, as soon as the studio door is closed, they are overtaken by a precariousness much more distressing than a seam that “grimaces”, a flounce of tulle not gathered enough or the best way to walk on a catwalk.