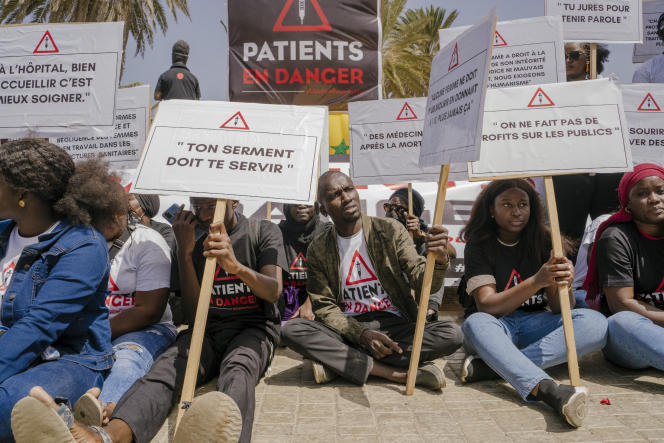 Eleven babies died in a fire at a hospital in Tivaouane, western Senegal, on Wednesday May 25. A drama that highlights the serious shortcomings of the public health system of this poor country. “I have just learned with pain and dismay of the death of eleven newborn babies in the fire that occurred in the neonatology department of the public hospital” in Tivaouane, Senegalese President Macky Sall tweeted. “To their moms and families, I express my deepest sympathy,” he added.

“Three babies were saved,” said Demba Diop, the mayor of Tivaouane – a religious town, stronghold of the influential Muslim brotherhood of the Tidianes. The fire was caused by “a short circuit and the fire spread very quickly,” said Diop, who is also an MP and better known as Diop Sy. “This situation is very regrettable and extremely painful. The investigation is ongoing to see what happened,” Health Minister Abdoulaye Diouf Sarr said on RFM radio on Wednesday. Traveling to Geneva, where he was attending a meeting of the World Health Organization (WHO), Mr. Sarr announced that he would return to Senegal on Thursday.

A team from the Ministry of Health, led by the director of public health establishments, Ousmane Dia, was on its way to Tivaouane, we learned from the ministry. The Minister of the Interior, Antoine Félix Abdoulaye Diome, was also expected overnight from Wednesday to Thursday in Tivaouane, according to the local press. On Twitter, the head of the Senegalese section of Amnesty International, Seydi Gassama, urged “the government to set up an independent commission of inquiry to locate responsibilities and punish the culprits”, on Twitter.

“More burnt babies in a public hospital. This is unacceptable Macky Sall,” tweeted opposition MP Mamadou Lamine Diallo. Four newborns had indeed already perished on April 25, 2021 in a fire in Linguère (north). The mayor and then interior minister, Aly Ngouille Ndiaye, had mentioned an electrical malfunction of an air conditioning unit in the maternity ward, where there were six babies.

At the beginning of April, another tragedy that occurred in a public hospital had already upset Senegal. The press had reported that Astou Sokhna, a woman in her thirties, nine months pregnant, died on April 1 at Louga hospital (north) after waiting in great pain for about twenty o’clock, the caesarean she was asking for. Staff allegedly argued that her surgery was unplanned and threatened to kick her out if she insisted.

This death had sparked a wave of indignation on social networks against the shortcomings of the public health system. Faced with the outcry caused by the death of Astou Sokhna, President Sall had instructed to seek responsibility. The Minister of Health admitted on April 14 that his death could have been avoided. The director of the hospital was dismissed and replaced. Three midwives who were on duty the night of the tragedy were given a six-month suspended prison sentence on May 11 for “failure to assist a person in danger” by the Louga High Court. Three other midwives, on call during the day, were released, according to a defense lawyer.

Another case in a public hospital caused a scandal recently. In Kaolack (center), an infant declared dead on May 8 by a nurse and then deposited in the morgue was found alive by his father a few minutes later, before finally dying during the day, according to the local press. The prosecution requested a firm six-month sentence against the nurse during the trial, local press reported on Wednesday. The date of the verdict has not been specified.