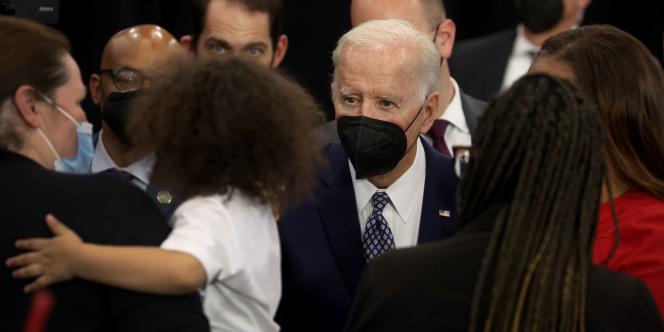 United States President Joe Biden vehemently denounced the “poison” of white supremacism on Tuesday, May 17, after a racist killing spree that killed ten people on Saturday, May 14, in Buffalo, New State. York. He also spoke of an act of “terrorism”.

That day, Payton Gendron drove more than three hours from his village to the Tops Friendly Market supermarket in a black neighborhood of Buffalo. Dressed in combat gear, a helmet and equipped with a camera, he had with him a semi-automatic weapon, engraved with the number “14”, which refers, in the world of white supremacists, to the sentence: “We must protect the existence of our people and ensure a future for white people. The 18-year-old parked the car that belonged to his parents. Then, around 2:30 p.m., he started shooting. He murdered ten people, including six store employees, and injured three others. Eleven of the victims were black. The killer then left the store, and was arrested by the police.

Referring to the racist thesis of the “great replacement” – to which Payton Gendron adheres – Joe Biden, moved and solemn, asserted: “I call on all Americans to reject this lie and I condemn all those who spread it to gain power , votes, money. »

“Too much fuel for hate”

“Those who claim to love America have fueled too much hate and fear,” the Democrat said again, without mentioning any names or party affiliations. “This venom, this violence cannot be the history of our time,” he argued, as the United States has seen several killings in recent years targeting African Americans, Jews and people of of Latin American origin.

Joe Biden began his speech with words of comfort for the families: “the time will come” when the memory of the deceased “will put a smile on your lips before bringing tears to your eyes”, promised this president whose life was peppered with family dramas.

He listed the names, recalled that one victim was broke buying “strawberries to make her favorite pastry”, another wanted candy “for family movie night”, that a man had was killed while picking up “a birthday cake” for his little boy. The American president made a point of recounting briefly the lives put at the service of a community and of families, mentioning an old lady who went every day to take care of her husband residing in a retirement home, or a supervisor of the supermarket having tried unsuccessfully to arrest the killer.

Previously, the American president and his wife Jill Biden had stopped at an improvised memorial at the scene of the killing. Jill Biden laid an armful of white flowers. Joe Biden, after removing his sunglasses, signed himself.

The president again called on Tuesday to regulate guns: “I am not naive. I know the tragedy will happen again (…) But there are things we can do. We can ban assault weapons from our streets. The Democrat has long called on Congress to ban assault weapons — like the one used on Sunday. A decision that has always come up against a Republican opposition hostile to any kind of regulation.

The Gun Violence Archive counts more than 200 “multiple casualty shootings” in the United States so far this year, in which at least four people have been injured or killed. Including the one perpetrated on Saturday by Payton Gendron, who claimed to be “fascist”, “racist” and “anti-Semitic” in a 180-page manifesto.

This racist massacre has been meticulously prepared for months, media revealed on Tuesday that peeled hundreds of messages on the Internet from the killer. According to the Washington Post and CNN, which had access to some 600 pages of messages exchanged on the Discord and 4chan networks, Payton Gendron came to Buffalo on March 8 and visited three times – at 12 p.m., 2 p.m. a.m. and 4 p.m. – in the Tops Friendly Market supermarket, which he attacked on Saturday, to do some scouting.

Payton Gendron also writes in December that he wants to kill black people and in February he targets this supermarket because of its high proportion of African-Americans, according to the Washington Post. The newspaper also reviewed the young man’s 180-page manifesto, which describes himself as “simply a white man who seeks to protect and serve [his] community, [his] people, [his] culture and [his] race”. Pages of the manifesto plan, minute by minute, the attack, the equipment and the broadcast on the Twitch platform.

Payton Gendron is currently being prosecuted for “premeditated murder” and is due to appear before a judge on Thursday.