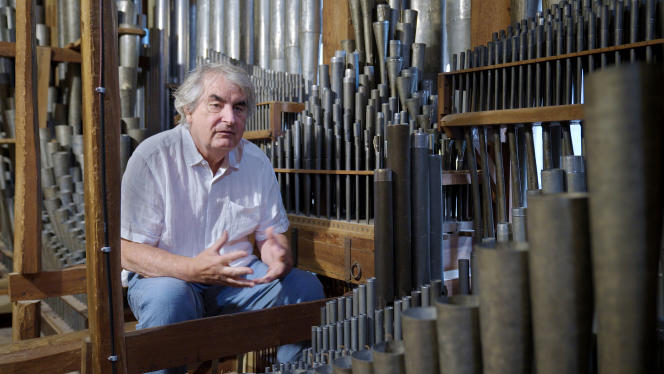 Associated with weddings, but also with death, which it accompanies in church, the organ remains an instrument unknown to the general public, who too often associates it with “sacred and sepulchral horror”, which the writer Robert de Montesquiou in one of his sonnets from 1899…

Chercheurs d’orgues, the formidable documentary of some ninety minutes, written by the Belgian organist Bernard Foccroulle and Pascale Bouhénic, who directed it, ideally comes to give a great breath of fresh air to this fascinating and rich world sound, which does not always bathe in the damp incense of churches and cathedrals.

Traveling extensively through space and time, the authors also make stops in continental Europe with non-church instruments, such as the marvelous little organ of the royal castle of Frederiksborg, in Denmark. Placed in a state room and remaining in its original state of 1610, it was intended for “amusement”, as the organist Bine Katrine Bryndorf puts it, in French.

At the end of the journey, the documentary lands at the Philharmonie de Paris, where a large instrument from the Austrian house Rieger Orgelbau has been installed. This technological prodigy makes it possible to play just about anything, including, of course, the most avant-garde works. The Hammond organ (passed from poor churches to jazz cabarets) and the cinema organ are mentioned, even if the film does not dwell on their case.

We will have preferred to devote a sequence to the organetto, a small portable Italian organ very popular in the 14th and 15th centuries, of which no original copy has come down to us, but which has been reconstructed: its small keyboard and the blower operated by the left hand perform miracles of expressiveness, so close to the breath and human emotions.

The human, and particularly the human voice, is the common thread of this European journey. It is rightly recalled that the ancient organs always sounded like the language of the country: the nasals of French thus inspired stops typical of this sound, such as the nasard.

What evidence, when we hear the trumpeting voice of a Spanish child, then the dapper playing of the two identical instruments installed face to face, in 1615-1617, in the collegiate church of San Pedro, in Lerma, in Spain, and which played, mingling with choirs, during masses celebrating battles, in particular.

The modest beauty of the small 17th century organ in the church of Peglio, in the forest above Lake Como (Italy), is touching: the timbre is colorful, but the power calibrated to accompany the voice. What a contrast to the gleaming plenum and plein-jeu of 18th century German and French organs. In the 19th century, the symphonic and industrial organ of Aristide Cavaillé-Coll, modeled on the orchestra, and which will be distributed throughout the world, will make people forget these atavisms.

Very educational (with sequences filmed in the studio of the great organ builder Pascal Quoirin) and produced with poetry and finesse, Chercheurs d’orgues is, moreover, illustrated with numerous musical tracks, sometimes vocal, by Johannes Ciconia (1370 -1412) to Pascal Dusapin (born in 1955), via Moondog (1916-1999), the blind Viking of the streets of New York.