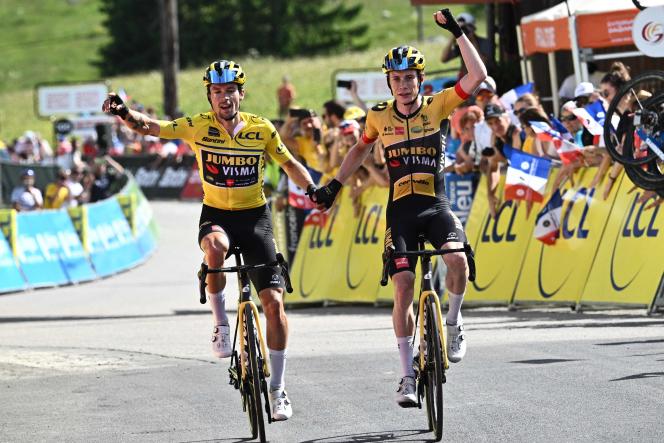 Hand in hand, Primoz Roglic and Jonas Vingegaard staged the crushing domination of the Jumbo-Visma at the Plateau de Solaison to the end, epilogue, Sunday June 12, of a Critérium du Dauphiné marked by the crushing superiority of the Dutch cycling team. To the first two stage successes of Belgian Wout van Aert, the Dane Jonas Vingegaard adds a third while Primoz Roglic reassures himself with victory in the general classification – ahead of Vingegaard – three weeks before the start of the Tour de France (1st to 24 July).

“Now we will have to finish the program,” warned the Slovenian on Saturday after taking the yellow jersey during the 7th stage. Primoz Roglic knows what he is talking about. The former ski jumper has already missed a Tour de France and a Dauphiné (in 2020), as well as a Paris-Nice in 2021 which were promised to him. But when Tadej Pogacar is not there and he avoids falling off his bike, he knows how to win stage races. You don’t win three Tours of Spain by chance.

During an 8th stage crushed by the heat, the Jumbo smothered the competition. The breakaway of the day swallowed up in the first kilometers of the terrible climb of the Plateau de Solaison, Steven Kruijswijk then regained his 2019 legs when he climbed on the podium of the Tour (3rd) to drop one by one the David Gaudu, Jack Haig , Damiano Caruso, Tao Geoghegan Hart or Esteban Chaves. “The whole team is fine, we controlled this difficult stage all day long”, welcomed Primoz Roglic at the microphone of France Television.

With 5.4 km to go, the job was almost done. Steven Kruijswijk parked, Jonas Vingegaard came out of his box to bring the last intruder to his senses, the Australian from the AG2R-Citroën team, Ben O’Connor, excellent 3rd in the stage and in the general classification. “I had to attack and Primoz follow me, everything went as planned. It’s amazing when it happens that way,” the Dane said after the finish.

Vingegaard was the strongest

Second in the last Tour de France, the former employee of a fish factory seems to accept his role as a luxury team member with good heart. He had replaced his leader with talent on the roads of the 2021 Tour after his Breton cabriole at the start of the event, but the boy does not – for the moment – have an Iznogoud temperament. Still, the “caliph” Roglic seemed almost in trouble in his wheel.

The cycling book has some very thick chapters on these stories of number 2 potentially stronger than their leader. In 2012, a certain Christopher Froome spent part of his Tour claiming his loyalty to Bradley Wiggins, while seeking to show the world his own superiority in the passes over the yellow jersey.

But the Jumbo-Visma is not the Sky of the time for a good reason: Tadej Pogacar. Like last year, the Slovenian opted for a more sentimental and confidential rise to power. Exit the Dauphiné, the double outgoing winner of the Grande Boucle has favored his National Tour which begins on Wednesday June 15.

So when we ask Jonas Vingegaard about a possible double for his team in July, the 25-year-old rider admits “that it will be much more difficult with riders absent from this Dauphiné”. If he quotes the name of Colombian Ineos Daniel Felipe Martinez first, it is indeed the second named, Tadej Pogacar therefore, who is blocking the way to the top step of the podium in Paris.

Since the start of the season, the two Slovenians have avoided each other in stage races. While Primoz Roglic seems to be well recovered from his knee pain, Tadej Pogacar (23) has not lost an overall classification since the Tour of the Basque Country in April 2021 where he was kind enough (or weak) to put himself at the service of his teammate, Brandon McNulty, leader of the event almost by breaking in but outclassed by Primoz Roglic during the last stage.

Jumbo-Visma’s ‘Wasps’ can still sting in his absence and their swarm may be the best current collective, the UAE runner remains the man to beat and his start to the season has not shown the slightest beginning of weak points. His failed sprint on the Tour of Flanders (4th) should not make us forget that he was the strongest on the cobbled mountains that day.

On the French side, this last stage came to shower a rather successful Dauphiné so far with three stage victories for Alexis Vuillermoz, Valentin Ferron and David Gaudu. The latter was still in the game on Sunday morning to grab a Top 5. But the Breton from Groupama-FDJ exploded during the last climb, conceding a delay of 7’20” and finally an anecdotal 17th place overall.