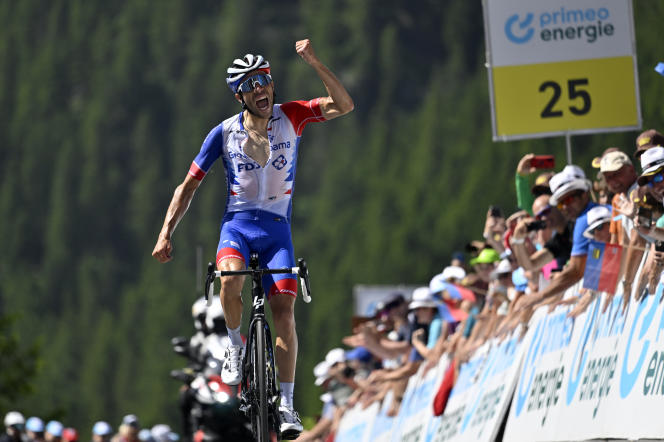 A little less than two months after his last success in the Tour des Alpes, Thibaut Pinot tasted the scent of victory again, Saturday June 18, during the seventh stage of the Tour de Suisse. The climber from the French team Groupama-FDJ won alone in Malbun (Liechtenstein) ahead of Spaniard Oscar Rodriguez (Movistar) and Kazakh Alexey Lutsenko (Astana Qazaqstan). He signs his first success at the WorldTour level since July 20, 2019 and his victory at the top of the Tourmalet during the Tour de France.

“I’m not the same as before my crash, I see the bike differently. I’m just here to win races, the rest doesn’t matter to me. At the microphone of La Chaîne L’Equipe, Thibaut Pinot hammered home his mantra of the moment: he is now aiming for stage victories rather than places of honor in the general classification.

An effort managed to perfection

Of which act, Saturday, on the seventh stage of the Tour de Suisse between Ambri and Malbun (195 kilometers). After losing time on Thursday, during the fifth stage, the Habs no longer posed a threat to the general favorites and were able to take the morning breakaway of around fifteen riders to satisfy their goal of victory.

Above all, the Franc-Comtois did not panic when Alexey Lutsenko and Ion Izagirre (Cofidis) won him on the first slopes of the final ascent (12.6 kilometers at 8.7% average). He managed his effort, patiently, to finally catch up gradually by coming back first on the Kazakh then on the Spaniard. Before, therefore, winning alone with a 25-second lead.

A victory in very difficult conditions

“It was long and very hard, it was very hot,” he continued. Winning under 35 degrees is important. This success is a new stage in the rebirth of Thibaut Pinot, who nevertheless does not appreciate strong heat. Two weeks before the Tour de France, where he should also focus on stage victories, his performance reassures his state of form after having already managed to follow the group of favorites, the day before, in the final ascent.

Before the time trial on the program for the 8th and final stage (25.6 km) on Sunday, Thibaut Pinot leaves the Tour de Suisse with a 33rd career victory.

In the general classification, Sergio Higuita (Bora-hansgrohe), fourth in the stage, took the leader’s yellow jersey at the expense of Jakob Fuglsang (Israel-Premier Tech), now third at 19 seconds. The Briton Geraint Thomas (Ineos Grenadiers), second just two seconds behind Higuita, is in good shape to win this Tour of Switzerland since he excels in the exercise of the time trial.