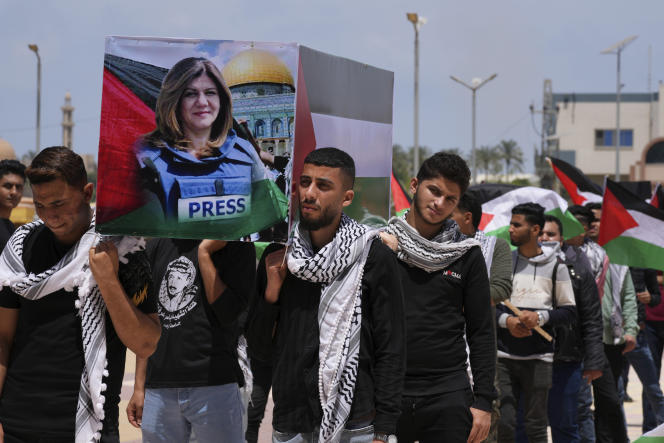 The day after the first conclusions of the preliminary investigation carried out by the Israeli army into the death, in mid-May, of the Palestinian-American journalist Shireen Abu Akleh in the occupied West Bank, the American television channel CNN revealed on Tuesday 24 May, gathering new evidence damning the Israeli defense.

The 51-year-old Palestinian-American, Christian, Al-Jazeera reporter was particularly known for her coverage of the conflict between Israel and Palestine. She had traveled to Jenin, in the occupied West Bank, on the morning of May 11 to follow armed clashes that erupted during a new Israeli army raid on a refugee camp in the city.

These military interventions have increased since the beginning of April, after several attacks, in which Israelis and foreigners were killed, were perpetrated by Palestinians. On May 11, Shireen Abu Akleh was killed by a bullet that hit her in the head. Witnesses, Palestinian officials and his employer accused the Israeli army of being behind the shooting.

The latter, as well as the Israeli government, strongly defended it. Prime Minister Naftali Bennett even claimed that the responsibility of “armed Palestinians” in the “unfortunate death of the journalist” was “probable”. The preliminary investigation, for its part, established that if one of these soldiers had fired the bullet that killed Ms Abu Akleh, he did not seem guilty of a crime, in particular because the journalist was, at the time of his death, “in the midst of a zone of intense combat”.

A defense that an investigation conducted by CNN – in particular from two videos of the scene, an audio analysis and the expertise of an explosive weapons professional – deconstructed almost entirely. Moreover, the American channel even claims that the journalist was killed in a targeted attack carried out by the Israeli army.

On the videos, the atmosphere is calm and no shots are heard before those who hit the journalist. Salim Awad, a resident of the refugee camp who was near reporters that morning, made a 16-minute video showing the streets were quiet. He also claimed that there were no armed Palestinians or ongoing clashes near the journalists.

“We faced the Israeli army vehicles for five to ten minutes before moving forward to make sure they had seen us,” said one of the journalists present, Shatha Hanaysha, adding that it was a technique common to many reporters in the region to convey who they are to the military. In the video filmed by Mr. Awad, military vehicles can be seen in the distance, with a clear view of the position of the group of journalists. “We saw four or five military vehicles on that street, with guns coming out of them and one of them shot Shireen,” the young resident said.

Other videos, studied by CNN, show these same vehicles from different angles. This visual evidence includes images from an on-board camera on an Israeli serviceman’s chest. It clearly shows five military vehicles parked one behind the other on the same street where the journalist was killed, just south of her position.

CNN asked Robert Maher, a professor and forensic expert in audio analysis, to estimate, based on footage recorded by the Al-Jazeera cameraman – who filmed the entire scene except for the moment the bullet hits the journalist – the distance between him and the shooter. In the video, the first sound, coming from the shock wave as the bullet departs, is followed, approximately 309 milliseconds later, by a “bang” as the bullet hits its target.

“This corresponds to a distance that can vary between 177 and 197 meters”, according to Mr. Maher, which is almost exactly the distance between the group and the army vehicles. The CNN team geotagged the position of the Israeli forces, which was confirmed by the Israeli preliminary investigation report.

A targeted attack, not random shots

A final information revealed by CNN comes from the study of the impacts that the bullets fired at the group of reporters left on the trunk of a tree, at the foot of which the journalist was standing. Security consultant, British Army veteran and explosive weapons expert Chris Cobb-Smith says Shireen Abu Akleh was killed in a series of separate shots, not an automatic burst.

“The number of bullet holes on the trunk of the tree (…) proves that it was not a random shot, she was targeted,” Mr. Cobb-Smith told CNN. From a range of about 200 yards, there was “zero chance”, he said, that a random burst would result in three or four shots hitting the same narrow target, such as the trunk of a tree.

This analysis also dismantles the Israeli argument that the journalist was hit by Palestinian fire.

Videos, dating from the same day, document many violent actions, showing Palestinian men strafing the streets at random in different places in Jenin.

The footage was shared by Israel’s Foreign Ministry and Prime Minister’s Office, with the latter claiming the video suggested “Palestinian terrorists killed the journalist.” However, CNN located these images south of the Jenin camp, more than 300 meters from Ms Abu Akleh’s position. Information that allows the channel to affirm that these Palestinian shots, which the Israeli government uses for its defense, cannot be those which hit the journalist and her group.

News Editor - May 25, 2022 0
Since the end of the last century, Avi Mograbi has been filming Israel, his country. His work as a documentary filmmaker seems simple, at...

Legislative 2022: how to check your registration on the electoral lists?...

Shooting in Texas: Steve Kerr, a voice in the face of...