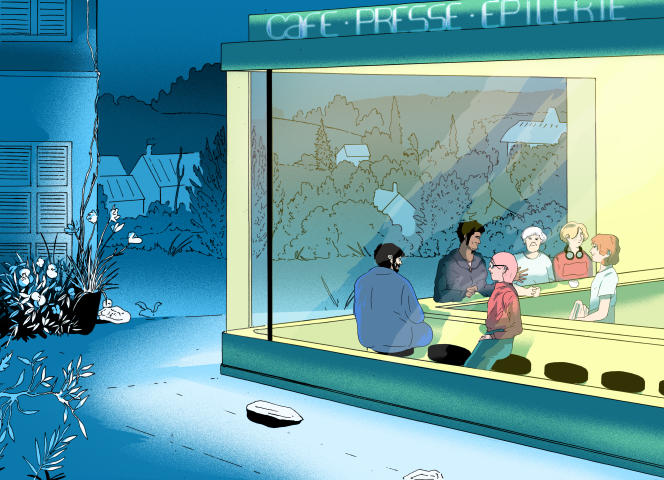 Each pilgrim has his favorite on the way to Santiago de Compostela. Some cite the beauty of the landscapes, others, reflection and self-transcendence. But it is for the villages that Laure Bonnet-Madin has a crush: “After three weeks, I realized that my favorite thing was to sit at the café to chat with the locals. Finally, I felt good. “Because, when she leaves for a long hike, in September 2021, the 30-year-old who grew up in the Paris region, a graduate of Rennes School of Business, is not fulfilled: “I have spent my entire career in real estate , from start-ups to Nexity, from sales to management. At the end, I felt like a hamster spinning in a wheel. I was just a pawn who was asked to make numbers, regardless of customer satisfaction. »

At 30, the condominium manager leaves her job, her companion, and takes another path, which introduces her to the epiphany in a village square. Two months later, the Parisian moved to Saintigny, a small rural town in Perche (Eure-et-Loir), which has barely 1,000 inhabitants. Her new apartment overlooks a 12th century church, famous for its medieval frescoes – and just promoted to historic monument, says the young woman. Sensitive to heritage, the neo-rural especially appreciates the business located on the ground floor of her new residence: a café, hers.

Because, back from her roaming on the way to Santiago de Compostela, Laure Bonnet-Madin applied for the “1,000 coffees” program. Led by the SOS group, an association specializing in social entrepreneurship, this initiative aims to revitalize villages with fewer than 3,500 inhabitants by opening or taking over multi-service cafés which are in danger of disappearing.

Indeed, if rural territories are not a uniform whole, they face a common trend: a feeling of abandonment linked to the loss of public services, essential shops and places of sociability. Thus, 53% of municipalities with less than 3,500 inhabitants have no daily shops or drinking places. And eight out of ten inhabitants of a rural municipality want to see a café open in their municipality, underlines the team of 1,000 cafés. The initiative is financed both by own funds from the SOS group, by major private partners, as well as by the National Agency for Territorial Cohesion.

Among the more than 110 municipalities selected by the initiative, Laure immediately spotted Saintigny, which met all her criteria: while many businesses were taken over in pairs, the café in question required a single manager. The village is not too far from Paris or the Sarthe, where part of the young woman’s family lives. Above all, it has “a soul.” I discovered it in winter, when the premises were in the middle of work. I immediately fell in love with its church and the small roads of the Perche”.

Love at first sight is mutual: while about thirty people apply to take over the business of the town, the municipal team chooses the young woman. “Initially, we were looking for someone from the area. But when we saw Laure, we immediately flashed. Of course, we teased her about her Parisian origins: between the capital and a sparsely populated town, it’s not the same atmosphere. But she was extremely determined. And his project seduced us,” explains the mayor, Waldeck Rousseau.

With the reopening of its business, Saintigny hopes to retain its lifeblood. The neo-rurals may flock to this countryside less than 200 kilometers from the capital, to the point of earning the Perche the nickname of “21st arrondissement of Paris”, “the young people of the area leave us and only come back when they retire”, regrets the mayor. He himself left to work in the capital and did not return to the town until he had retired from the army: “To retain young people, you have to offer them work, but also life itself. If the coffee works, we’ll open another business. A butcher. A hairdresser. Maybe a baker. »

The 1,000 Coffees initiative is based on the collaboration of three stakeholders. The town hall ensures the provision of commercial premises and low-cost housing. The association takes care of the recruitment of the manager, accompanies him in the launch of the activity and intervenes as an investor for the initial needs of the establishments. The manager imagines, with the citizens of the municipality, the identity of the place and the offer of services.

Laure Bonnet-Madin wants to transform the old village café into an intergenerational meeting point. On the terrace as on the wallpaper, red bricks pay homage to Percheron architecture. The main room will host a bar area with bistro tables for eating, but also a space for printing, tobacco, press, parcel depot, Française des jeux and grocery store, explains the young woman: “I will mainly offer emergency food, in order to avoid people having to take the car to buy a wafer of butter. And I will highlight the short circuit. My customers are locals, but also Parisians who arrive at the weekend and are fond of local products. »

The establishment also has a smaller room, where customers can settle down to read or work, and where various activities will be organized, from evening concerts to tastings with local winegrowers, including birthday parties. . A large counter ensures continuity between the different spaces. The café will be called Le Comptoir saintillant, continues the manager: “Saintigny is a new entity, resulting from the merger, in 2019, of Frétigny and Saint-Denis-d’Authou. The two municipalities are at the same time close – only 3 kilometers separate them – and distant. During the presidential election, the first voted RN, while the second voted for Macron. The idea is that the café is a place of sociability for everyone. »

In any case, it is already busy: every day, locals come to find out about the inauguration date, scheduled for the end of June, and offer some suggestions. “Don’t forget to buy mustard!” They no longer have any at Leclerc, ”slips Jean-François Gasse. The retiree, a former post office employee, recalls that the town had, a few decades ago, four cafes, a hotel, a butcher and a bakery: “From now on, we all have to go to Nogent-le-Rotrou, 15 kilometers from here, to do our shopping. »

While waiting for the café to open, the inhabitants are already fantasizing about their first order at the Comptoir Saintillant: “A little pressure on the terrace”, announces the mayor. His assistant opts for “a fresh baguette, because then I have to freeze my bread.” Martin Barbier, whose garden adjoins the establishment, joins the conversation: “For me, it will be a coffee and a little game scratching.” Aline, 15, also a neighbor, hesitates, then launches: “Just a bit of friendliness. »