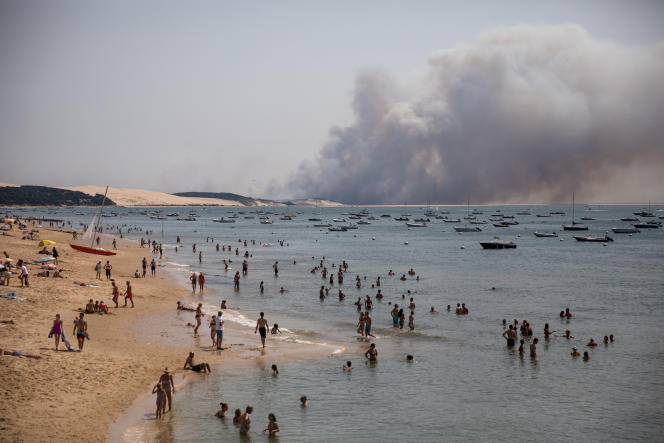 While the heat wave is still raging in France and moving east, the night of Monday July 18 to Tuesday July 19 was “very difficult” on the fire front, in the words of the prefect of Nouvelle-Aquitaine and Gironde, Fabienne Buccio. Three fires are underway in La Teste-de-Buch, Landiras and Vensac, where a fire broke out at the end of the day on Monday. A total of 19,000 hectares burned, and 37,000 people were evacuated.

Nearly 2,000 firefighters from all over France, supported by significant air resources, were mobilized against three fires that burned 6,500 hectares of forest in La Teste-de-Buch, 12,800 in Landiras, and 70 in Vensac, according to the last point of the prefecture of Gironde communicated Tuesday morning.

On Monday, the five campsites from which 6,000 holidaymakers had been evacuated on the night of Wednesday July 13 to Thursday July 14, at the foot of the Dune du Pilat, “burnt down to 90%”, according to the prefect.

Nine water bomber planes (six Canadair and three Dash) have been deployed, Interior and Overseas Minister Gérald Darmanin said in a tweet on Monday evening, adding that since July 12 air assets have carried out more than 1,400 airdrops.

A man was taken into police custody on Monday afternoon as part of the investigation into the Landiras fire, the Bordeaux prosecutor’s office announced in a press release. The ongoing investigation, “which is continuing with numerous expert reports and hearings of witnesses”, was opened for “destruction by fire of wood, forest, moor, maquis or plantation of others which may cause damage to people”, reported the same source.

In Landiras, “the criminal identification technicians were able to make findings which accredit a deliberately malicious act”, writes the prosecution in its press release.

The investigators made a connection between this incident and other fire outbreaks observed in the same area on the same day, at different times. However, “clues remain to be exploited in order to eliminate or retain the thesis of the same author”, explains the prosecution.