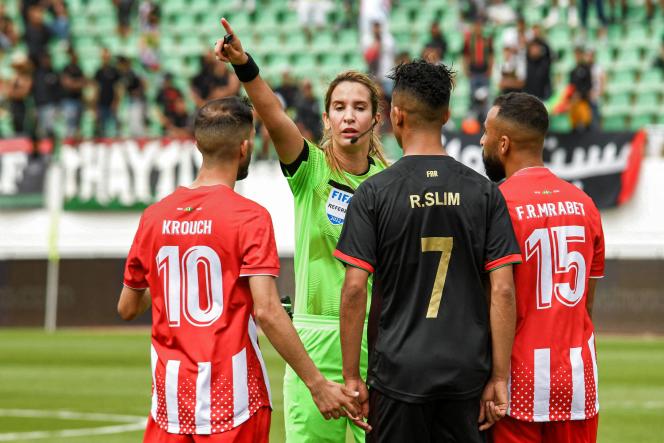 Neon green shorts and jersey, blond ponytail, whistle blows and raised arms… Saturday, May 14, on the field of the Agadir stadium, in Morocco, a woman was in charge of a football match. Playing on the field between the players of AS FAR, the Moroccan Armed Forces club, and the Moghreb Atletico de Tetouan (MAT) team, on the occasion of the Moroccan Cup final, Bouchra Karboubi marked the history of football by becoming the first woman in the kingdom – but also the first in the Arab world – to referee a final of men’s competition.

In Morocco, this great first was welcomed as a victory, much more resounding than that of the soldiers who won the prestigious Throne Cup with a score of three goals to zero. “Revolution”, “pride”, “honor for Morocco”… Erected as a symbol of a country that is moving towards greater equality between men and women, the 34-year-old Moroccan, who is also a police officer, has stay in mind. “A giant step in the marathon of Moroccan women’s rights”, greets a user on social networks. “Small steps, but we’re making progress!” “, welcomes another. “A day will come when we won’t have to say bravo anymore, because today’s progress will be the norm tomorrow,” another user hopes.

Warmly welcomed to the stadium a few minutes before the kick-off of the match on Saturday, Bouchra Karboubi was also congratulated by many supporters the day after the match for having led this final “with an iron fist”, as underlined by a fan on social media: “She was never intimidated by the players of both teams and their respective staffs. Better than that, she called the offending players to order and issued the red and yellow cards when necessary without any exaggeration and without complacency. »

An icon, even a model

In Morocco, Bouchra Karboubi had already made a name for herself after being appointed national referee in 2007, then international in 2016. Two years later, the Moroccan made her baptism of continental fire during the African Cup of Nations (CAN ) female, organized in Ghana. In 2020, she was the first woman to lead a first division match of the men’s professional championship in Morocco (the Botola Pro1). More recently, her name made the rounds when she was appointed as a member of the refereeing staff during the CAN 2022 final in February between Senegal and Egypt in Cameroon. On Saturday, she was assisted by another female referee appointed by the Royal Moroccan Football Federation (FRMF), Fatiha Jermoumi, to officiate the Throne Cup final.

In the Moroccan press, she appears as an icon, that of a woman who knew how to impose herself in a discipline monopolized by men. More generally, she is a model in a country which, although it has enshrined gender equality in its Constitution since 2011, still faces immense challenges in terms of women’s participation in the economic, political and social spheres. .

“Sacred challenge” and “long obstacle course”, said this pioneer in a recent interview on the site of La Quotidienne, to succeed in the double challenge of becoming both a police inspector and a world-renowned referee. In the magazine Tel Quel, the young woman, native of Taza (north-eastern Morocco), recounted the difficulty, as a child, of living her passion for football in “a city where it was hchouma [shame] that a girl puts on shorts to go out in the field and hang out with men.” How, too, she had to face stereotypes and opposition from part of her entourage to join an arbitration school in 2001 and become a referee in youth tournaments. Since then, she has continued to rise through the ranks. His next goal now: to referee at the 2023 Women’s World Cup in Australia and New Zealand.