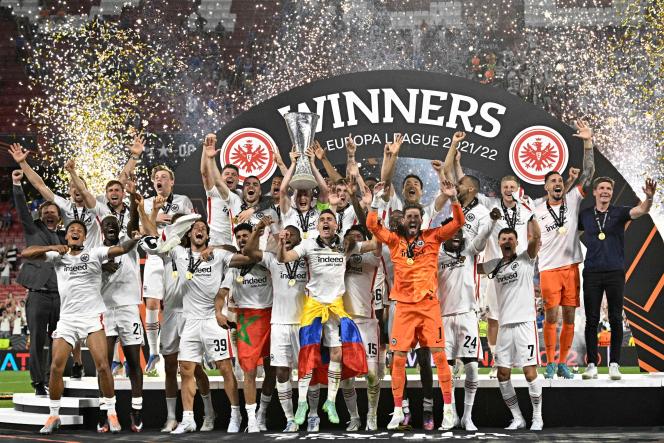 This is the first time that a German club has won the Europa League under this name, which appeared in 2010. Eintracht Frankfurt, winner in 1980 of the old version of this European Cup, called the European Cup at the time, UEFA, won Wednesday, May 18 in Seville (Spain), against Glasgow Rangers after a penalty shootout (5-4) following a 1-1 draw at the end of regulation time and extra time.

This success, the “Eagles” owe in large part to their goalkeeper, Kevin Trapp, imperial. After making two decisive saves at the end of extra time, first in front of Ryan Kent (118th) then on a free kick from James Tavernier (120th 2), the former Paris-Saint-Germain goalkeeper stopped the veteran’s attempt Welshman Aaron Ramsey during the penalty shootout to crown his team.

Rafael Borré, who already scored the equalizer for the German club in the 69th minute after Rangers opened the score by Joe Aribo (57th), sealed the victory for Eintracht with a final converted shot on goal, to conclude the perfect session with five successful shots out of five.

A historic achievement for Eintracht, which notably defeated FC Barcelona and West Ham to reach the final, and end its odyssey crowned with laurels in the hot Andalusian night, in front of the nearly 44,000 supporters of the Sanchez-Pizjuan stadium.

Oliver Glasner thus became the first Austrian coach to lift a European trophy since the legendary Ernst Happel in 1983 (winner of the C1 with Hamburg).

“We’ve played thirteen matches in Europe, and we haven’t lost a single one this season. I have no words to describe the work these guys have put in to get this far,” exclaimed the Eintracht coach.

For the Scots, on the other hand, the disillusion is immense: the “Gers” have also been waiting for fifty years to regain European glory, since their European Cup Winners’ Cup in 1972.

If the match was hung until the end, it could have degenerated from the start: in the 5th minute, John Lundstram played a ball a little too high, and his crampons touched the front of the captain’s skull. ‘Eintracht, Sebastian Rode, who lay down on the lawn immediately bringing his hands to his bleeding wound. Long cared for by trainers, he will return to the lawn with a blue and white bandage around his head, after changing his blood-soaked jersey.

Apart from this incident, the first period turned out to be quite disappointing. The two teams battled for possession, with a lot of technical waste. We’ll have to wait half an hour to see Scotland’s first attempt: a ball curled in from the left by Joe Aribo that didn’t catch the frame but forced Trapp to stretch out with his whole body, just before a cool break essential.

Because the thermometer exceeded 40 degrees in Seville during the day on Wednesday. And it was the supporters of the two teams who set fire to the stands, with songs, drums and tifo for the Germans. The Pizjuan inferno really took shape on the return from the locker room, when the “white wall” of German supporters lit red smoke to carry their team to final triumph, and end a 42-year drought on the continental stage. .

“I had dreamed of that night, that it was going to be a historic night for the club, a historic night for me,” said Colombian striker Rafael Santos Borré. “Now we’re going to enjoy it. [The supporters] are fantastic, they always accompany us everywhere, and this title is partly theirs, for sure,” he concluded.

“Playing a European final and losing it will always hurt,” admitted Dutch Rangers coach Giovanni Van Bronckhorst. “It didn’t work out in our favour, but I can’t blame my players after all they gave (…)I know how it is, I lost a World Cup final, the biggest game that can exist. But you’re always moving forward,” he encouraged.

Rangers player James Tavernier did not score in this Europa League final but he finished as the competition’s top scorer (7 goals), a first for a defender. But small consolation compared to the disappointment of the evening.