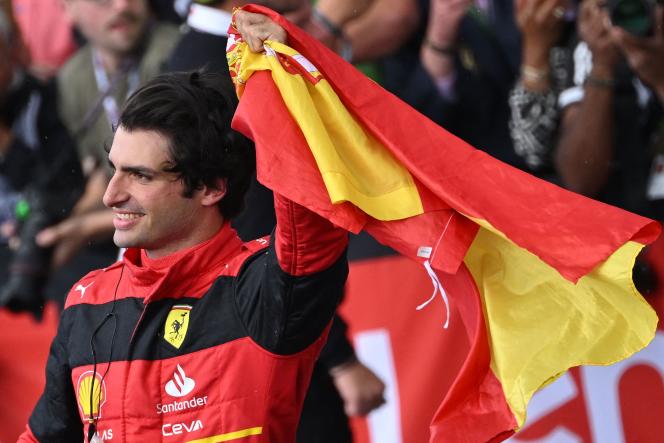 The 150th attempt was the right one for Carlos Sainz in Formula 1. The Spaniard took his first victory at the wheel of his Ferrari on Sunday July 3 at the British Grand Prix, the tenth round of the world championship. The Mexican Sergio Perez (Red Bull) and the Briton Lewis Hamilton (Mercedes) accompany him on the podium, while the Dutchman Max Verstappen, still leading the championship at the end of the race but in difficulty at the wheel of his Red Bull , finished in a modest seventh place.

The race had been interrupted from the start and for almost an hour following an impressive crash. The Thai Alexander Albon (Williams) and the Chinese Guanyu Zhou (Alfa Romeo), two of the drivers involved in the accident, did not have “serious injuries”, specified the International Automobile Federation (FIA).

According to the images of the accident, the single-seaters of Pierre Gasly (AlphaTauri), George Russell (Mercedes) and Zhou Guanyu (Alfa-Romeo) came into contact as they approached the first corner. Following this accident, the race was interrupted before a new start. Carlos Sainz took advantage of this to take off at the head of the race, he who had taken pole position ahead of the world champion, Max Verstappen.

“I will never forget this weekend”

In addition, while the race was still neutralized, several people “attempted”, according to the International Automobile Federation, to enter the track. “These people were immediately removed and the matter is now being handled by local authorities,” the FIA ​​said.

The operation was claimed by the group of British environmental activists Just Stop Oil, which campaigns for the end of the exploration of fossil fuels in the United Kingdom. “Five Just Stop Oil activists disrupted the British Grand Prix at Silverstone by trespassing on the track and sitting on it,” the environmental group said.

In the race, the last laps saw in particular Sergio Perez, Lewis Hamilton and Charles Leclerc (Ferrari) offer a good fight for second place, multiplying overtaking. Perez extracting himself from the trio, it was then a breathless fight for third place that the Briton and the Monegasque offered to the 400,000 spectators present around the circuit.

“I don’t know what to say, it’s amazing. It’s my first victory, after 150 races, with Ferrari and at Silverstone I couldn’t have hoped for better. I will never forget this weekend,” Spaniard Carlos Sainz said at the finish. In front of his audience, Lewis Hamilton recognized the merits of the winner. “I tried to attack the Ferraris. I gave everything. Congratulations to Carlos [Sainz],” said the third in the race.

The world championship will continue on Sunday July 10 with the Austrian Grand Prix, eleventh round of the season, on the Spielberg circuit.