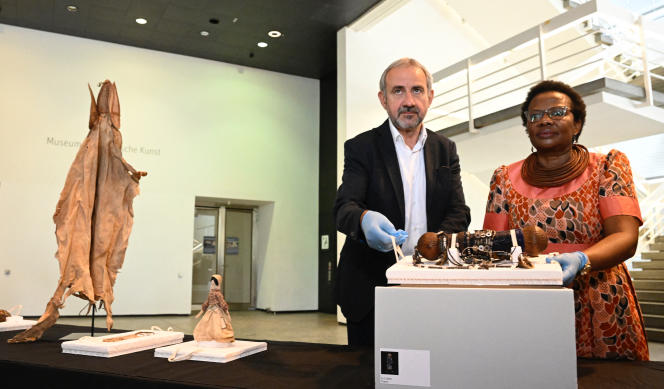 Germany handed over to Namibia, Monday, May 30, twenty ancient objects stolen during colonization, in the form of a loan to the National Museum of Windhoek, AFP journalists noted. “All the objects were collected during the German colonial era from different Namibian communities,” presumably during the second half of the 19th century, Namibia Museums Association president Hilma Kautondokwa said during the interview. an official ceremony in the Namibian capital.

The 23-piece collection, which will be studied by local researchers, includes a vessel decorated with three heads, a doll wearing traditional dress, jewelry and spears. The objects were chosen by experts in Namibia for their historical, cultural and aesthetic significance. They are exhibited in the museum and visible to the public.

“These objects will remain in Namibia,” assured Hermann Parzinger, president of the Prussian Cultural Heritage Foundation, which oversees Berlin’s museums, responding to critics deploring that it is a loan and not a restitution in good and due form.

The first genocide of the 20th century

Hundreds of ancient objects from this southern African country are still in German collections. The Ethnological Museum of Berlin has been discussing their fate with Namibia for three years as part of Germany’s commitment to improve relations with its former colony.

Less extensive than those of France and the United Kingdom, the German colonial empire encompassed parts of several African countries, including Namibia, Cameroon and Togo. In 2021, Berlin officially admitted having committed genocide in Namibia. German settlers killed tens of thousands of Herero and Nama indigenous people there between 1904 and 1908. Many historians consider these massacres to be the first genocide of the 20th century.

Germany has returned skulls and other human remains sent to Berlin at the time for “scientific” experiments, but the two countries have so far failed to agree on the payment of reparations. Research on the 23 objects must be carried out to determine if they were stolen during the period of the genocide.