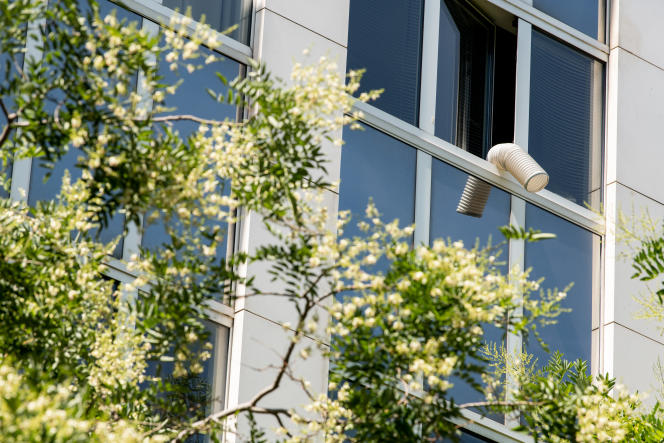 The heat wave has knocked down much of France since July 11 has not caused a very sharp increase in electricity consumption, but the increase in temperatures does have a “climate effect”: the network manager transmission system (RTE) observes a trend towards increased use of air conditioners and fans as soon as perceived temperatures of 25°C are reached. “From this temperature and for each additional degree, between 700 and 800 megawatts (MW) more will be consumed, approximately the equivalent of the electricity consumption of a city like Marseille”, specifies RTE.

In all, 25% of French households and 40% of businesses now have air conditioning equipment, estimated the Environment and Energy Management Agency (Ademe) in 2021. Their energy and environmental performance varies from one device to another. Those of mobile air conditioners, more present in apartments, are considered mediocre by the agency.

Air conditioning is responsible for 4.5% of emissions generated by electricity production in France. On a global scale, it represents 10% of electricity consumption, according to the International Energy Agency (IEA), which estimates that by 2050 the global energy demand due to air conditioning should triple with the multiplication of sales.

Purchases, sometimes compulsive in the event of high heat, of mobile air conditioners have led to stock shortages at certain distributors in recent years. According to the consulting and data analysis company GFK, sales of these devices exceeded 125 million euros in 2020 in France, to experience a decline of 51% the following year, due to a wet summer. and rainy. In 2022, over the first five months of the year, before the hot weather in June, the market was up 17% compared to the same period the previous year.

Purchases of so-called “PAC air air” systems – made up of an indoor block and an outdoor block – intended for individuals and the small tertiary sector have quadrupled in ten years, reaching 837,000 sales in 2021. For the most part reversible, they also provide mid-season heating.

The refrigerants of the devices also contribute to global warming in the event of leakage or defective recycling. The induced greenhouse effect can be more than 2,000 times greater than the equivalent amount of CO2 over a hundred years, assures Ademe.

Car air conditioning – whether on or off – is also at risk of letting these gases escape. As for its use, it increases the CO2 emissions of the vehicle by 1% to 7%, with an average of one liter of fuel consumed more every 100 kilometres.

At the local level, air conditioning can also contribute to the rise in temperatures, because it evacuates to the outside the calories captured in the buildings. If the installed capacity were to double by 2030, during a heat wave, an increase of 3°C in the outside temperature could be attributable to it, stipulates Ademe. In Ile-de-France, scientific teams are currently carrying out measurements to observe the variability of urban microclimates.

To date, the data shows that temperature differences at night in the event of high heat can be 7 to 8°C between Paris and rural areas. In very mineral spaces, the materials indeed store solar energy during the day to reject it at night, creating an urban heat island effect. “Across all devices and buildings, air conditioning can increase this effect to an additional degree,” says Valéry Masson, Météo-France researcher at the National Center for Meteorological Research.

European regulations plan to organize the gradual abandonment of refrigerants by 2030. Manufacturers are preparing for this. In a context of tension over energy against a backdrop of war in Ukraine, some European countries are also trying to regulate uses. In Italy, a law has prohibited since May setting the air conditioning below 25°C in places open to the public. Spain has set a threshold of 27°C in its public buildings.

The French government, for its part, says it wants to make energy sobriety a priority, in order to reduce energy consumption by 10% by 2024, and has launched three working groups on the subject. Friday, July 8, the Minister for Energy Transition, Agnès Pannier-Runacher, called on companies to reduce their energy consumption “by controlling heating, controlling air conditioning”… The Minister recalled that the regulations recommend that air conditioning is not triggered when the outdoor temperature is below 26°C. “It’s simple to apply and provides immediate energy savings,” she added.

Ademe, for its part, publishes practical guides to limit the use of air conditioning. “Once equipped with a device, you have to be as sober as possible, only air conditioning when you are present, for as short a time as possible”, insists Céline Laruelle, engineer in the building department. Adjusting your air conditioning to 27°C instead of 22°C would halve the energy consumption of appliances. Starting it from 30°C outdoors instead of 27°C would result in a three-fold reduction.

The IEA also estimates that improving the performance of appliances could double their energy efficiency by 2050. The thermal renovation of buildings is also a national priority at this time. Misting and natural ventilation systems are being studied. Urban cooling networks, already present in 32 cities in France, including the largest in Europe in Paris, are another less energy-intensive avenue. Some are being extended or created in certain cities in the South, assures the Federation of Energy Environment Services-National Union of Urban Heating and Urban Air Conditioning, which represents the sector.

In Italy, Mario Draghi ready to stay if the parties of his coalition agree

News Editor - July 20, 2022 0
The heat wave has knocked down much of France since July 11 has not caused a very sharp increase in electricity consumption, but the...

Sailing: François Gabart and the Ultime class, the epilogue of a...

In Italy, Mario Draghi ready to stay if the parties of...

Who is really Marion Rousse, the great lady of the Grande...