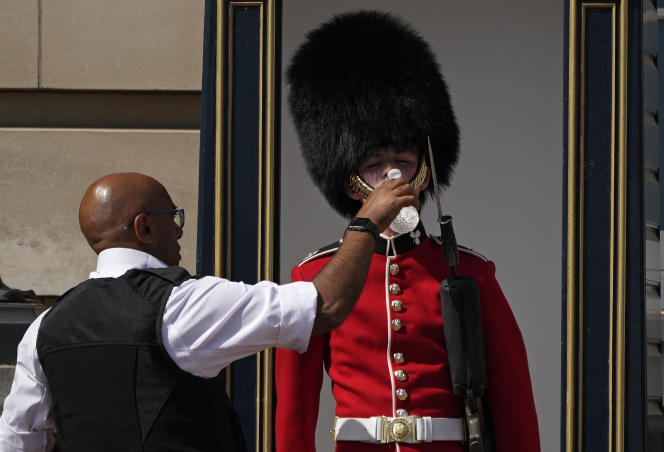 It is a matter of national emergency. Never in its history has the British Health Safety Agency issued a level 4 alert. This is an alarming warning of the risks that heat poses even to young and/or healthy people. In the United Kingdom, 38.1 ° C were recorded on Monday July 18 in the east of England, the highest temperature this year, the third on record. This Tuesday the thermometer will again cross a new course.

“Global warming is really here. We must act in the face of this phenomenon… and also learn to live with it, ”commented Gary Evans, a 68-year-old retiree in the seaside resort of Tankerton, in the south-east of the country. The highest temperatures in Britain are expected for Tuesday and could exceed the 40°C threshold, a first for the country. The British record dates back to July 25, 2019, with 38.7 degrees recorded in Cambridge, in the east of England. “Hotter than the Sahara,” headlined the tabloid The Sun on Monday.

Some schools will remain closed, while major disruptions are expected in transport. Traffic at London’s Luton Airport has been suspended due to a “surface defect” on the runway due to the heat. On the rail, several railway companies called on the population not to travel on Tuesday, the British rail network not being designed for such heat.

The government was accused on Sunday of neglecting the situation, after resigning Prime Minister Boris Johnson missed a crisis meeting on the subject in Downing Street.

Fires in the Iberian Peninsula

Spain has been in the grip of a suffocating heat wave for more than a week which has caused numerous fires, ravaging tens of thousands of hectares. On Monday, almost the entire country remained on “extreme risk” alert for the highest fire. “Climate change kills people (…) but also our ecosystem, our biodiversity,” Prime Minister Pedro Sanchez reacted on Monday. Raging fires have killed a shepherd in northwestern Spain, the second death after a firefighter in the same area on Sunday.

After breaking its temperature record for July on Thursday, with 47°C recorded in the north of the country, Portugal should experience a much cooler day, ending a week of heat wave. In the center and north of the country, some 800 firefighters were still fighting four fires on Monday. According to civil protection, the forest fires in 10 days killed four people, injured five seriously and led to the evacuation of 960 people. A septuagenarian couple was found dead in their charred car, the mayor of Murca (north) announced on Monday.

Nearly 44,000 hectares have burned since the start of the year, according to the Institute for the Conservation of Nature and Forests, more than in 2017, when the fires killed around 100 people.

In the north also the heat wave is raging

Belgium also fears heat records on Tuesday, the thermometer can climb in places up to 40 ° C, according to the Royal Institute of Meteorology (IRM). Schedules have been arranged for certain trades exposed to heat.

About half of the territory of the EU is currently facing a risk of drought due to the prolonged lack of precipitation, which exposes countries such as France, Romania, Spain, Portugal and Italy to a probable decline in crop yields, according to the European Commission.

The proliferation of extreme weather events is a direct consequence of global warming according to scientists, with greenhouse gas emissions increasing in intensity, duration and frequency.

News Editor - July 19, 2022 0
War in Ukraine, galloping inflation, serial shortages... While the summer promises to be difficult for the European economy, a new twist has added another...