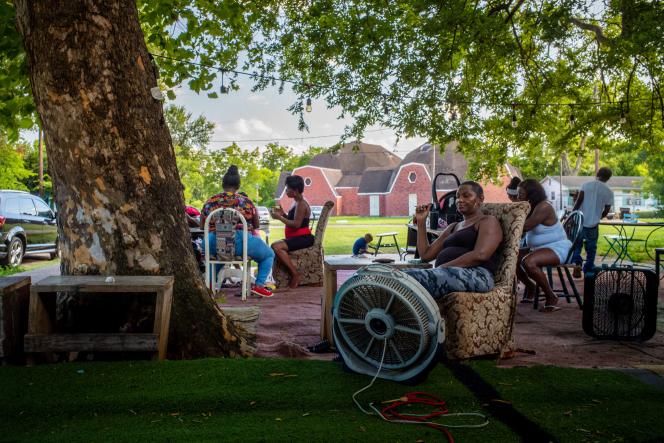 Nearly one hundred million Americans, or nearly a third of the population of the United States, have been placed on heat wave alert since Monday, June 13 by the National Weather Service. Exceptional temperatures were recorded over much of the country, from California to Virginia, but it was especially in the Midwest that the mercury reached more than 100 degrees Fahrenheit (37 ° C) for several days in a row.

The “heat dome,” or high-pressure dome, that overlooks the Great Plains and Great Lakes region is expected to remain in place for several more days, National Weather warned. “This heat, combined with high humidity, is likely to generate temperatures well over 37°C in many places,” she warned. Parts of Indiana, Kentucky and Ohio were expected to experience temperatures above 42 degrees on Wednesday. A temperature of 37 degrees was expected in Detroit, Michigan.

The heat wave has lasted for several days. St. Louis, Missouri, surpassed its record high of 37.7 degrees on June 13. On June 11, record heat was observed in twenty-seven major cities. It was 45 degrees in Phoenix, the capital of Arizona, a record for a century for this city of 1.7 million inhabitants where the thermometer now rises to more than 38 degrees for four months of the year (145 days in 2020). And 42 degrees in Las Vegas, for the first time since 1956. Municipalities have installed cooling centers in neighborhoods.

Although 91% of American homes have air conditioning, extreme heat events remain deadly: they cause the death of more than 1,300 people each year, according to the EPA (Environmental Protection Agency). Thunderstorms and tornadoes broke out on the outskirts of the heat dome on Monday, causing power outages that affected several hundred thousand people, particularly in the Chicago, Illinois area.

In Yellowstone National Park, the flooding of the river has prompted an evacuation order and the closure of all entrances. A national tourist gem – it is home to the Old Faithful geyser, which erupts around twenty times a day – this 8,900 km2 park is located mainly in Wyoming and, for a smaller part, in Montana and Idaho.

The heat that has prevailed for several weeks has melted the snow faster than usual. The already swollen river has been fed by heavy rains in recent days. She overflowed, taking away wooden cabins and even bridges and houses in her path. More than 10,000 visitors have been ordered to leave the park, due to the high risk of mudslides, as the tourist season has just started. On Tuesday, several hundred of them were stranded in Gardiner, Montana, at the northern entrance to the park, where the road was partly washed away by flooding. The Yellowstone River, measured at Corwin Springs, north of Gardiner, had reached 4.2 meters on Monday. The previous record was more than a century old: 3.5 meters in 1918.