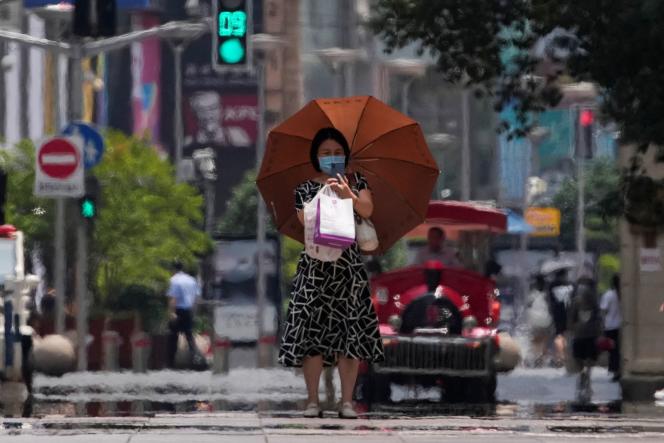 The experiment is cruel, but instructive: a man measures the temperature on the ground, 65°C on the pavement heated by the sun, then places an ant there. He counts, “yi, er, san”: at the third second, the ant cowers and dies. The video, taken in Dayang, Jiangsu Province, north of Shanghai, circulated on Chinese social media on July 14. For the past week, China has been facing an exceptional heat wave.

Across the country, 84 cities have issued heatwave red alerts for temperatures exceeding 40°C. In Shanghai, the mercury rose to 40.9°C in the shade on July 13, equaling a record set in 2017. On the same day, in central Chongqing, it reached 41.3°C. Although the country, accustomed to high heat in summer, is generally well equipped with air conditioning, this heat wave leads to an increase in energy consumption, to the point that the authorities of several provinces have taken rationing measures to preserve the electrical network. Harvests are also in danger, already pushing the price of certain foodstuffs up.

The heat wave of the past few days is not an isolated phenomenon: June was already the hottest month in China since 1961. In July, several deaths were reported by the Chinese media, in Xi’an and in the provinces of Sichuan and Zhejiang. After a brief respite this weekend, the thermometer should panic again from Wednesday, July 20 in the provinces of Jiangxi, Zhejiang and Fujian in particular, with temperatures between 39 and 42 ° C, announced the Administration. meteorological of China.

Traditionally, summer in China is marked by “sanfu”, three ten-day periods marked by high temperatures and high humidity, where you have to “stay in bed”, between mid-July and mid-August. This year, the hot weather is expected to last longer – until August 24, the weather administration estimates – only to be interrupted by the heavy rains that hit the country every summer. That’s about forty days of “staying in bed”…

But not everyone has this option. Dozens of cities affected by outbreaks of Covid-19 continue to regularly test their entire population. In sweltering Shanghai and the Yangtze River Basin, residents complain of being cooked in queues leading to testing centers. The task is even more difficult for the health personnel responsible for taking the samples, who are suffocating under the mandatory full suit.

In Chinese media and on social media, photos are circulating showing these famous “da bai” (“big whites”, nickname of health workers and other officials in coveralls) resting against blocks of ice in an attempt to cool off. Others, on the verge of fainting, are rescued by residents waving fans. After a nurse suffered severe sunstroke, Nanchang, a medium-sized city just north of Shanghai, decided to reduce the protective equipment for those in charge of the tests. At the same time, companies have developed suits equipped with cooling systems.

In addition to the health and comfort of the Chinese, this heat wave is likely to affect the economy. Zhejiang Province, southwest of Shanghai, has called on its 65 million people to curb their energy consumption. Hotels have thus blocked the air conditioning at 28 ° C, impossible to lower the temperature further. Some electricity-intensive industries such as textiles suffered rationing in Hangzhou, Shaoxing, and Haining.

In the fall of 2021, power shortages had severely disrupted Chinese industrial production. Since then, China has responded by increasing its coal production. Rising temperatures, which come with drought in some northern provinces, could also affect agricultural production in arid regions in Inner Mongolia, Ningxia and Hebei, the meteorological observation center warned. Harvests of wheat, soybeans, corn and pastures are threatened.

Faced with this heat wave, the consumption of ice cream and watermelon has increased while cities have opened missile shelters built from the 1930s, to allow the population to cool off. On July 17, the city of Hangzhou, capital of Zhejiang, even fired sixty rockets to “seed” clouds, a technique meant to artificially bring down rain.

News Editor - July 19, 2022 0
The experiment is cruel, but instructive: a man measures the temperature on the ground, 65°C on the pavement heated by the sun, then places...

Heatwave: “Today, we see the development of climatorasurism: we no longer...