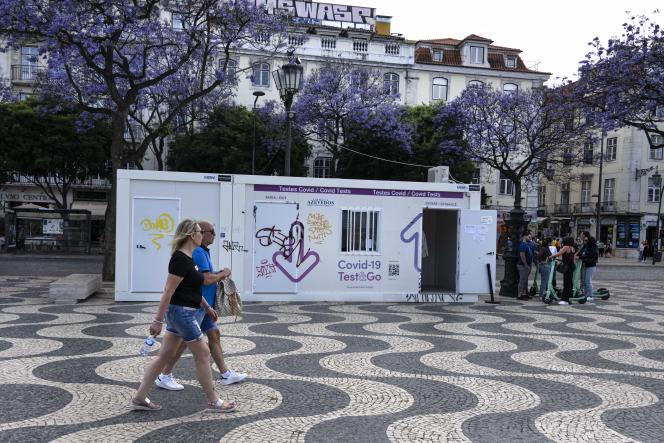 The beaches of the Algarve are seeing the first holidaymakers return, the steep streets of Lisbon are reconnecting with the swarms of tourists and the music festivals are ringing out their amps. In Portugal, tourism has returned to pre-pandemic levels and most restrictions have been lifted. But the latest wave of Covid-19, attributed to the spread of Omicron’s BA.5 subvariant, is of growing concern to health authorities. To the point that many experts are now pleading for the return of the mask indoors, or even outdoors if there are crowds.

By far the European Union country most affected by the pandemic, according to the European Center for Disease Prevention and Control, and the second in the world after Taiwan, Portugal has an incidence of 3,559 cases per 100,000 inhabitants. over 14 days (compared to 405 in France), a test positivity of 54.4%, and a mortality of 43.6 per million inhabitants over 14 days (compared to 12.1 in France). Hospitals are more spared than in previous waves.

The Portuguese barely had time to savor the lifting of most of the anti-Covid measures when the curves panicked again. While the obligation to wear the mask was lifted on April 22 – with the exception of public transport, health centers and residences for the elderly -, on May 19, the director general of public health, Graça Freitas, was already recommending its return to offices and outdoor events. “If I’m alone in my office with the window open, I don’t put on a mask. If someone enters my office, I put on a mask, ”she explained very schematically during an interview on the television channel TVI.

Faced with the incomprehension of the inhabitants, the Minister of Health, Marta Temido, ruled out the return to the compulsory and general wearing of the mask, and Ms. Freitas considered that “at this stage, a recommendation [was] sufficient”. Portugal is indeed among the top tier of the most vaccinated countries in Europe – almost 95% of the adult population has received two doses, and 76% have received three. But the director of public health stressed that the new subvariant was transmitted “even more than quickly” and had “the ability to evade our immune system”, while specifying that it did not appear to be more serious.

While nearly 78% of deaths linked to Covid-19 concern people over the age of 80, it also ruled out the administration of a fourth dose to the entire population and postponed the presentation until the fall. of the next vaccination schedule.

The Covid-19 pandemic monitoring group at the Higher Technical Institute of Lisbon published a report on May 24 in which it estimates that the rise in mortality is expected to continue throughout June. He too recommends the return to wearing a mask during concerts and outdoor and indoor events if a distance of two meters cannot be respected between two people. According to the researchers, the abrupt increase in incidence “is probably due to the abrupt withdrawal of mask use in almost all circumstances and to the new BA.5 lineage of the Omicron variant”. One of the report’s co-authors, mathematician Henrique Oliveira, believes that “hospitalizations, intensive care placements and deaths will remain high through June 25.” Some 200,000 people are currently infected in this country of barely 10 million inhabitants.

Fears in recent days have been based on a possible extension of this wave. On May 26, Minister of the Presidency Mariana Vieira da Silva said the peak of BA.5 infections appeared to have been passed in the country. But the curve, which did not bend, even resumed an upward direction.