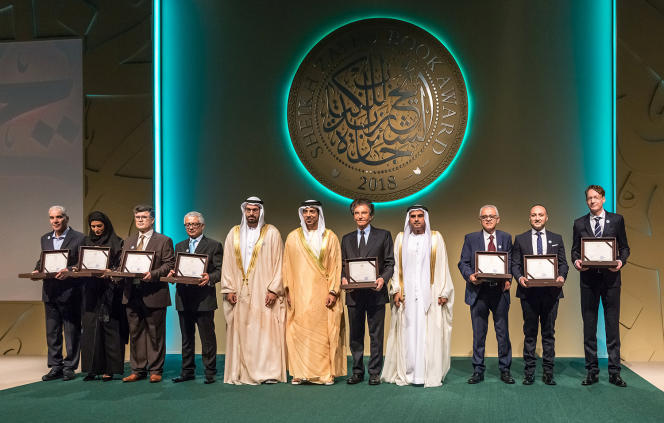 Whether one is interested in football, cinema, art or literature, it has been difficult in recent years to ignore the growing influence of the Middle East on global popular culture. Qatar has football, Saudi Arabia inaugurated its Red Sea International Film Festival in December in the presence of Catherine Deneuve and Thierry Frémaux… In the United Arab Emirates, a young federal state founded in 1971, while Dubai attracts influencers who praise the merits of the destination to their millions of subscribers on social networks, Abu Dhabi has its Louvre, its Sorbonne and its literary prize.

Created in 2006, the Sheikh Zayed Book Award (named after the founder of the federation, who died in 2004) intends “to highlight the most remarkable actors in Arab literature and culture, explains by e-mail the secretary general of the prize, Dr. Ali Ben Tamim. We wholeheartedly believe in the value of circulating knowledge across cultures, promoting intercultural dialogue and exchanging views on the world. Every year, in May, in the imposing setting of the Louvre Abu Dhabi, nine prizes are awarded to authors in various categories (literature, youth, Arab culture in another language, literary and artistic criticism, etc.) as well as to a “Cultural Personality of the Year”.

Led by the Arabic Language Center in Abu Dhabi, itself affiliated with the Ministry of Culture and Tourism, the Sheikh Zayed Book Award distributes a trifle of 1.6 million euros in prizes each year (197,000 euros for each winning author and 270,000 euros for the personality of the year – which can also take the form of an institution, like the Institut du monde arabe, awarded in 2018). By way of comparison, let us remember that, while the December prize awards a check for 30,000 euros each year to its winner, the Goncourt prize, for its part, splits a symbolic 10 euros to reward his choice, while the Femina and Interallié prizes n offer nothing but fame (and additional sales).

As often with literary prizes, the operation, if it claims to be transparent, is not without gray areas. The selection of works in competition is thus entrusted to a scientific committee which appoints a group of “cultural experts” to judge, anonymously, the books in the running. A researcher in Arabic studies at the University of Lyon-II, Floréal Sanagustin joined the scientific committee of the prize in 2021. Before that, he officiated for a few years as an “evaluator” responsible for selecting works in French on the Arab world that will be submitted. to the jury in the “translated books” category.

The position is remunerated and the price “of course apolitical”, insists Floréal Sanagustin. “The scientific committee is totally free,” he continues. In the 2000s, Egypt and Lebanon were at the heart of the Arab world, but in recent years we have seen a transfer in terms of publishing to young countries, such as the Emirates, for which culture is a key element. »

Among the writers awarded this year, the Emirati writer Maisoon Saqer, who leans in an investigative story on the history of Café Riche, a mythical place in Cairo; the young Tunisian author Mohamed Al-Maztouri wrote about Bedouinism in ancient Arabic poetry; the Iraqi-American researcher Mushin J. Al-Musawi recounts the influence of the Arabian Nights on world culture… In 2021, an author, the Egyptian Iman Mersal, was crowned for her book on a forgotten writer from the 1960s, In the footsteps of Enayat Zayyat, published in France by Actes Sud.

Classical works, therefore, not particularly interested in the major ethical issues that cross contemporary societies. For example, don’t look for questions about minority rights or democratic demands: Abu Dhabi-style culture ends where the freedom to express opinions deemed reprehensible by the regime begins.

By putting literature at the heart of their “soft power”, the United Arab Emirates, however, believe they can restore their reputation, in particular by crowning women. But this ripolining of their public image is without any real value, laments Mina Thabet. Born in Egypt, this human rights activist directs, from London, the Middle East and North Africa branch of the organization PEN International, which fights all over the world to defend freedom of expression. “We have been working on the case of the United Arab Emirates for a long time and we have every reason to be concerned about the situation of writers in the country,” he says, citing the case of Mohammed Al-Roken.

Arrested in 2012, along with 93 other activists and artists known as “UAE 94”, the university professor and lawyer was accused of plotting a coup and sentenced to ten years in prison. outcome of a “grossly unfair” trial, according to Amnesty International. Also imprisoned in grim conditions, the poet and activist Ahmed Mansour, sentenced in 2017 for “damaging the reputation of the state”, is another victim of this “ultra-repressive police state”, wrote Le Monde in February 2021. In this context, the Sheikh Zayed Book Award necessarily appears as a political effort to make people forget, with euros, the shortcomings of the regime with regard to its protesting nationals. “Soft power” but harsh reality.