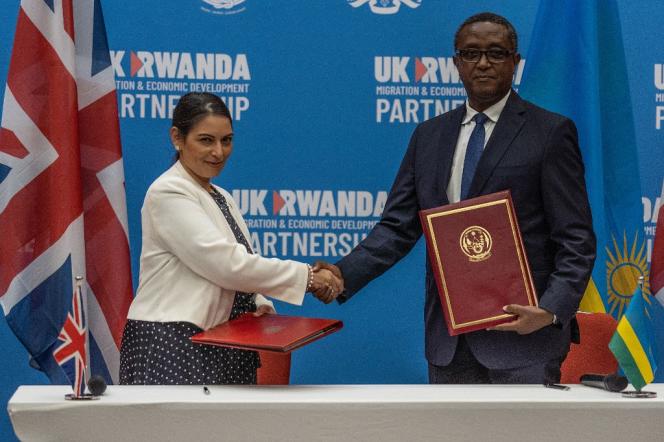 “Kill me or sentence me to death instead of sending me to Rwanda. An asylum seeker who fled Iraq where he was persecuted for being a homosexual, Hadi crossed Europe to reach the United Kingdom. He now fears being deported to Rwanda. As part of a controversial new law, the United Kingdom plans to send from mid-June asylum seekers who arrived illegally on British soil to Rwanda, an East African country located 6,000 miles from London.

Sitting in a park in the “Gay Village” of Manchester, in the heart of the northern English city, Hadi – the name has been changed at his request – feverishly recounts his journey, that of a homosexual in Iraq who fled rape attempts and persecution in his country.

In Iraq, they “attempted to rape me”, testifies in Arabic the young man of about twenty years, the scars of his attack still visible on his skin. “I was hit in the arm and back and passed out from the pain. So when he learns that the United Kingdom, where he sought asylum in January 2022 after crossing Europe from east to west, wants to send migrants to Rwanda, Hadi fears he will relive his worst nightmares.

The British scheme aims to deter illegal Channel crossings, which have been on the rise despite Conservative government promises since Brexit. It has drawn strong criticism from human rights groups, opposition figures in both countries and even the United Nations. A first flight is supposed to take off on Tuesday but associations have filed an appeal with the courts.

“We suffered and escaped death, we crossed the sea, all to be sent to Rwanda? Kill me or sentence me to death instead of sending me there,” Hadi told AFP. “It’s a death sentence for all refugees,” he added, pleading with Prime Minister Boris Johnson and Home Secretary Priti Patel to drop their plan.

Because while homosexuality is not prohibited in Rwanda, LGBTQ people are frequently victims of discrimination: fired, denied by their relatives, deprived of medical care or even beaten up.

The Home Office itself admitted in a report to having “concerns” about the treatment of LGBTQ people in the East African country. “Even in the government report, Rwanda is not a tolerant place for LGBTQI people, so why do you want to deport them to Rwanda? So that they are further persecuted? “Asks AFP Aderonke Apata, who founded the NGO The African Rainbow Family in 2014.

Herself a former Nigerian asylum seeker and lesbian, she now helps LGBT migrants with her association in their efforts and their integration into English society. Hadi “lives in fear every second,” says Ms Apata: “He thought the UK respected gay rights (…) Now that he is there, he is suddenly faced with the prospect of being deported. We are talking about people who have been persecuted in their country, who have managed to flee and find refuge in the United Kingdom, and now the British government wants to deport them and send them to homophobic countries where we will not monitor what is happening. for them. »

According to her, the monitoring mechanisms provided for by law and supposed to be put in place in Rwanda are not realistic. “Here in the UK I personally experienced homophobic attacks when I was in detention. Nothing was done and that was here in the UK (…) Now explain to me, if we send them to Rwanda, who is going to protect “the asylum seekers? “The UK government is shedding its obligations to conventions that guarantee refugee rights,” she concludes.