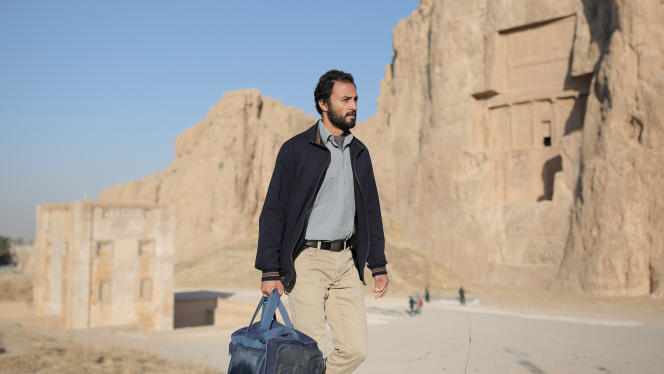 On July 13, 2021, at 2 p.m., the multi-award-winning Iranian filmmaker Asghar Farhadi climbs the steps of the Palais des Festivals in Cannes, surrounded by the team of A hero, presented in the official selection. He has no idea that five spies have slipped into the Louis-Lumière auditorium to examine his film, shot by shot. Sent by their comrade Azadeh Masihzadeh, a former student of Farhadi, they are responsible for giving a detailed account to the young woman. Staying in Tehran, she intends to verify an intuition that has been undermining her for more than two years: was the undisputed master of Iranian cinema inspired by the documentary All Winners, All Losers, which she made during an internship with him? ?

At the center of both films: a man detained in Shiraz prison for unpaid debt. During a leave, he finds in the street a bag filled with gold coins. After some hesitation, he decides to return it to its owner. The press picks it up and makes him a local hero, before doubt sets in… Did he return the money or did he make this whole thing up to restore his image? What is striking here is the mirror effect of this gesture so ambiguous that it makes appearances falter. Indeed, behind the scenes, a similar question arises: Did Farhadi act loyally to his student, or did he use her research for his own purposes?

On July 17, 2021, the filmmaker won the Grand Prix, but, a year later, like his hero, fate turned against him. Following Azadeh Masihzadeh’s complaint for plagiarism, the Tehran prosecutor’s office indicted him, finding similarities in his film with the work of his student. In response to this decision, the Cannes Film Festival this year included Asghar Farhadi on the jury for its 75th edition, who spoke, for the first time, on the case from the Croisette: “My film and the this person’s documentary are inspired by the same news item. The story of this prisoner had been reported by the newspapers and reports of the time. It belongs to the public domain. The question of copyright does not arise. While it is difficult to know whether Masihzadeh’s complaint will follow its course on the investigative side, the case, seen in its details, reveals itself to be strewn with gray areas which weaken the implacable logic of copyright as described by the filmmaker.

The story begins in 2014, at the Karnameh Institute of Arts and Culture in Tehran. Asghar Farhadi leads a workshop in which the trainees produce, in small groups, documentaries on the following theme: the heroization of individuals in society, taking the particular case of these anonymous people who find valuable objects and return them to their owners. While the students are dividing up the subjects, Azadeh Masihzadeh, originally from Shiraz, the city of poets located 900 kilometers south of the capital, decides to work on a local story in order to reduce his expenses. On the spot, an acquaintance told her that she had seen a report on the regional channel of Fars (Fars Province TV), a few years earlier, on a prisoner from Shiraz.

Masihzadeh leads the investigation at the local newspaper, goes to the television station, where she retrieves the wanted extract “with difficulty”, she says, to which is added a permission to film in prison and meets its protagonist, Shokri. For six months, at each of the five sessions, Farhadi views the rushes, comments on them and suggests work directions. Finally, it is agreed that a collective film brings together the five projects resulting from the workshop, on the sole condition that the name of Asghar Farhadi does not appear. “He felt that his name would arouse in the viewer an expectation that could harm the students,” explains his French producer, Alexandre Mallet-Guy. However, that does not mean that the idea and the plot of these works did not belong to him. Subsequently, Masihzadeh obtained permission from the filmmaker to screen his film independently of the others, under the title All Winners, All Losers.

Five years later, the young woman is again following an internship given by Farhadi, at the Bamdad Institute, in Tehran. In the meantime, the filmmaker won a second Oscar for The Client in 2017 and shot Everybody Knows in Buenos Aires, which opened at Cannes in 2018. Masihzadeh, meanwhile, founded AtoZinema, a distribution company films, and won the Special Jury Prize at the Shiraz Film Festival for All Winners, All Losers. The reunion is warm and the work constructive, until the day he calls her after a lesson. In the presence of Parisa Bakhtavar, his wife and director of the establishment, and Farideh Shafiei, the secretary, the filmmaker asks him to certify in writing that his documentary is based on an idea and a subject that he himself had proposed in 2014.

Taken by flashes of anxiety, she questions her intentions, feeling a form of pressure. “Before that, he offered me scouting and dangled a role in his next film, A Hero,” says Masihzadeh, who never wanted to be an actress. Through his producer, Farhadi flatly denies: “Even for the smallest roles, he does tryouts. How could he offer her that? This paper was not official, it simply confirmed that Asghar Farhadi had given the idea and the plot during the workshop. He asked her during a harmless exchange, simply because her film was a free interpretation of the same news item. For her part, Masihzadeh believes that the investigation she conducted and filmed in the first person goes beyond the information found in the press and is a work in itself. In the grip of insomnia, she stands guard.

At the end of 2020, Iranian friends warn Masihzadeh that Farhadi is filming in Shiraz. She rushes there and asks her mother to drive her to the address given to her: Mehrayin School, Ghasr-e-Dasht Street… But arriving unexpectedly in the midst of the Covid-19 epidemic does not make it easy for her. task. An assistant blocks him – “Mr. Farhadi doesn’t know you,” reports Masihzadeh. The young woman leaves, torn between the desire to believe that everything is fine – the actresses dressed as teachers seemed to indicate that the shooting has nothing to do with the subject of her documentary – and the intuition that something is wrong. round.

It is with relief that she learns in the press that Farhadi is making a film about a wrestler and his trainer. But a few weeks later, the publication of the summary of A hero, selected in official competition at the Cannes Film Festival, worries Masihzadeh. So she asks her friends present on the Croisette to play spies in the projection room of the Palace. According to their reports, she assesses a 70% resemblance between her story and that of Farhadi and, in the process, she creates the hashtag

To prevent the affair from spreading, Farhadi offered him an amicable arrangement at the Maison du Cinéma in Tehran (the equivalent of the National Cinema Center in Paris). He sends his lawyer, she insists that he come in person, to which he agrees, on October 23, 2021. The two parties finding no common ground, the situation escalates. According to Masihzadeh, Farhadi would have lectured him – “Your documentary is mine, because you made it in my studio…I gave you the subject as a gift and now you claim that I copied!” I’m ashamed to have a student like you,” she said.

victim of a system

After the release of A Hero in Iran, Farhadi filed a complaint for defamation against Masihzadeh, who then risked two years in prison and seventy-four lashes. For her part, she puts online All Winners, All Losers in its long version of forty-five minutes, which her opponent suspects of having reworked so that she gets closer to A hero then files a complaint for plagiarism and convinces Shokri, the protagonist of his film, to file a complaint for invasion of privacy. Farhadi faces financial penalty and prison. Finally, Masihzadeh engages in meticulous work and notes in an Excel table fifty-six similarities between his work and A Hero (forty-nine, if we remove those from information published in the press) among which: the woman who lost the money discovers the wanted poster at the bank; her husband is unaware that she has lost money; the prison staff treat the prisoner favorably after his good deed.

In Iran, the press leans in favor of the filmmaker, who began his career with a television series, History of a City, in which each episode… started from a news item. However, on March 14, 2022, the prosecution rejected Farhadi’s complaint and considered that there was enough evidence, 44 exactly, to indict him. He also noted the filmmaker’s inability to prove that he subscribed to the Magiran newspaper, which he said he consulted during his research. “The religious authority in charge of the file was not a specialist in copyright or cinema and refused the intervention of specialized experts, decreeing that cinema was not a specific legal matter. She decided to take the case to court, ”regrets Mallet-Guy.

Is the filmmaker the victim of a system he openly denounced when A Hero was nominated for the Oscars, claiming that he was not in the pay of the government, of which “the extremist media have not had no trouble destroying [him], marginalizing [him] and stigmatizing [him] over the years”? Did he underestimate Masihzadeh’s investigative work and firepower? “I don’t understand his relentlessness, the amount of the fine incurred is ridiculous compared to the request”, annoys Mallet-Guy, who recalls that, this year, competed in the official competition of the Cannes Film Festival Les Nuits de Mashhad, by Ali Abassi, on the serial killer Saeed Hanaei, who had already been the subject of a documentary in 2002, without this being a problem. However symbolic the battle led by Masihzadeh may be, it does not stop digging into the ambivalences of the fable on truth and lies crowned with glory a year ago.