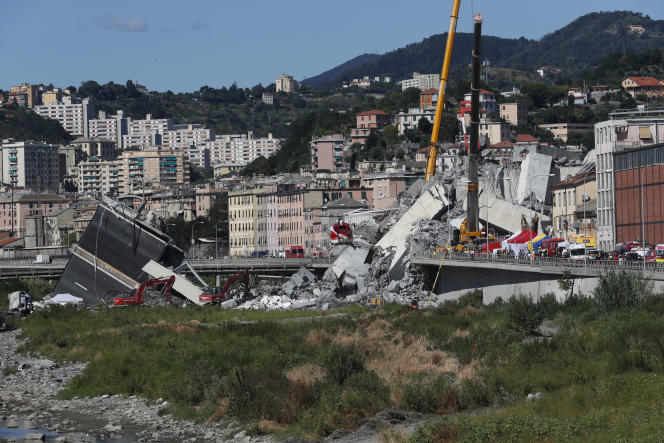 The shocking images of the collapse of the Genoa bridge, in which 43 people perished, have gone around the world. Four years later, a mega-trial involving 59 defendants opened on Thursday July 7 in this Italian port city to determine who was responsible.

Thursday morning, under a tent erected in the courtyard of the Genoa court, judge Paolo Lepri recited in a feverish atmosphere the names of a hundred lawyers for the defendants and the civil parties who were gathered there. This purely formal opening hearing ended shortly before noon.

Most of the defendants, absent on Thursday morning, are executives and technicians from the two companies, including the general manager of Atlantia, the company holding 88% of the shares of Autostrade per l’Italia, Giovanni Castellucci, as well as the former Spea boss Antonino Galata, and officials from the Ministry of Infrastructure. They are prosecuted in particular for manslaughter, attack on transport security and forgery in public writing.

The debates, suspended during the summer, will begin on September 12. The duration of the trial is estimated at two or three years.

Lack of work to “preserve dividends”

On August 14, 2018, in the pouring rain, the Morandi motorway bridge, an essential axis for local journeys and traffic between Italy and France, collapsed, throwing dozens of vehicles and their passengers into the void. This tragedy cast a harsh light on the poor state of transport infrastructure in Italy and on the troubled role of the company Autostrade per l’Italia, ASPI, accused of not having maintained the work of art to save money.

“The Morandi Bridge was a ticking time bomb. You could hear the ticking, but you didn’t know when it was going to explode,” Walter Cotugno, one of the prosecutors, said in February. For him, there is no doubt that the management of ASPI and the engineering company Spea, in charge of maintenance, “were aware of the risk of collapse”, but that they were reluctant to finance works in order to “preserving dividends” from shareholders.

The findings of the magistrates’ investigation are overwhelming: “Between the inauguration [of the bridge] in 1967 and the collapse fifty-one years later, minimal maintenance interventions were not carried out to strengthen the stays of pillar number 9”, which collapsed on the day of the tragedy.

This analysis, the respondents do not share it. For Giovanni Paolo Accinni, one of Giovanni Castellucci’s lawyers, “the bridge collapsed due to a hidden construction defect”. “The defendants are innocent, starting with Mr. Castellucci,” he told Agence France-Presse.

The prosecution will be able to count on a major witness: Roberto Tomasi, Mr. Castellucci’s successor and ASPI executive since 2015, who shows his desire to turn the page and who could prove cumbersome for his predecessor.

“I want a real trial”

ASPI belonged at the time of the tragedy to the Atlantia group, controlled by the wealthy Benetton family, which ended up ceding its share in May to the State, pushed towards the exit under pressure from the political class.

If their former leaders find themselves on the bench of the accused, the companies ASPI and Spea on the other hand escape the trial thanks to an amicable agreement concluded with the prosecution, providing for the payment of 29 million euros to the State.

For Raffaele Caruso, a lawyer who represents the committee of relatives of the victims of the Morandi bridge, this pact “constitutes a first recognition of responsibility” on the part of the two companies. Only two families of victims refused to accept the compensation offered by ASPI, which paid out more than 60 million euros in this respect.

Egle Possetti, the president of the committee of relatives of the victims, declined the offer so as not to lose the possibility of becoming a civil party and weighing in on the trial. “We are confident that the trial will bring out the full truth about the tragedy to prevent our loved ones from dying in vain,” she said Thursday morning on the steps of the courthouse in Genoa. The other rejection came from Roberto Battiloro, who lost his son Giovanni, a 29-year-old videographer, in the drama and was offered a million euros: “My son’s life has no price, I want a real trial. »

News Editor - July 7, 2022 0
He saved his post on several occasions but on Thursday July 7 British Prime Minister Boris Johnson announced he was stepping down as leader...