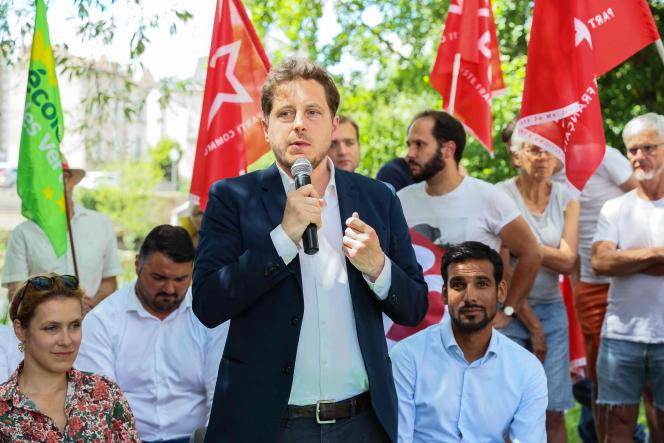 It’s better than in 2017. The national secretary of Europe Ecologie-Les Verts (EELV), Julien Bayou, qualified for the second round of the legislative elections in the 5th district of Paris, bringing together 39.58% votes in the first round of the legislative elections, Sunday, June 12. Candidate of the New Ecological and Social People’s Union (Nupes), he will be opposed, in the second round, to Elise Fajgeles (La République en Marche), who obtained 37.88% of the vote.

This ballot was perhaps one of the least legible of these legislative elections, and for good reason: the 5th constituency of Paris has been without a deputy since May 12, 2021. On that day, the holder of the mandate, Benjamin Griveaux (La République en Marche) had announced his withdrawal from political life after the crash of his campaign for the municipal election in Paris, which he had to abandon after the broadcast of a sexual video. Less than a year from the presidential election, his departure had not caused a by-election.

The game was therefore open, but La République en Marche (LRM) started with a small advantage, since its candidate, Elise Fajgeles, occupied the seat from July 2017 to April 2019: she had been elected as a substitute for Mr. Griveaux and the had replaced in the Hemicycle when he was appointed to the government. He then returned to the Palais-Bourbon in place of Madame Fajgeles, to engage in the battle for the Paris City Hall.

Kingpin of the Nupes

Julien Bayou, 41, has his notoriety on his side. Former activist of Génération précaire (against the precariousness of trainees), Black Thursday (against poor housing) and the social movement Nuit Debout following the labor law of 2016, he became spokesperson for Europe Ecologie-Les Verts in 2013. Regional councilor of Ile-de-France since 2010, he became national secretary of EELV in 2019.

Logically less visible than Yannick Jadot during the presidential campaign, he was brought back to the fore by the negotiations he then conducted with La France insoumise, making the Greens the first partner of Jean-Luc Mélenchon’s party in Nupes, before the communists and socialists.

Julien Bayou had faced the Griveaux-Fajgeles duo in the 2017 legislative elections, in the same constituency. At the time, he had obtained 12.36% of the vote in the first round, a few votes from the socialist finalist, Seybah Dagoma (12.47%). Benjamin Griveaux was far ahead, at 43.63%. LRM had taken advantage of a crumbling of votes between socialists, ecologists, communists and “rebellious”. This time, Mr. Bayou benefits from being the candidate of these four forces at once, gathered in the Nupes.