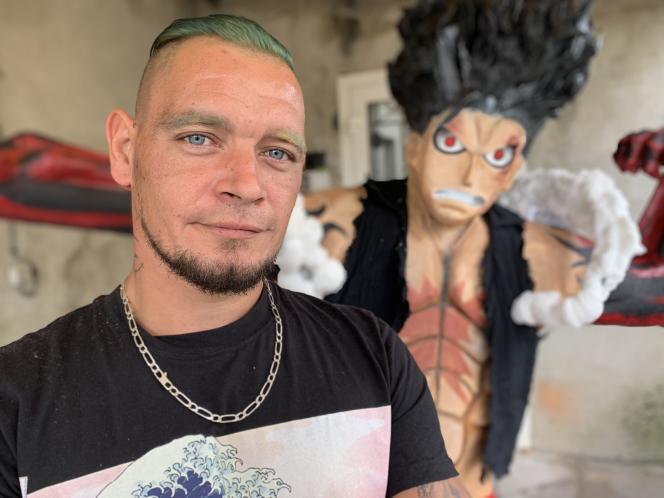 At the Japan Expo, the great gathering of Japanese pop culture, which takes place from July 14 to 17 at the Villepinte Exhibition Center (Seine-Saint-Denis), many visitors will undoubtedly be able to take their picture in front of two statues , life-size, of Luffy, the central character of One Piece, the best-selling manga in the world. If curiosity piques them, they may even ask their creator, Christophe Desnoielle, what material they are made of. “Zinc,” he replies proudly.

Zinc, yes, this bluish-white malleable metal, usually used to make gutters or bar counters. Roofer-carpenter in Saint-Maxire (Deux-Sèvres), Christophe Desnoielle, 33, knows the material well to work with it every day on the roofs of the area. The Japan Expo, where he will hold a stand for the first time, will be the starting point, he hopes, of his great project: from artisan to becoming artist.

The idea was forged in his head in 2015 after a “commission” from his wife, Amélie, to fashion in zinc a copy of the helmet of Sauron, the title character of Tolkien’s Lord of the Rings. Until then, Christophe Desnoielle had practiced making roses or symmetrical patterns, as roofers sometimes have fun doing in their spare time. After Sauron, will follow a 34-sided soccer ball, a Japanese maple intended to adorn a tombstone and a replica of the wolf-headed mask of the Bloodhound, one of the protagonists of Game of Thrones. “I thought there was a way to go further,” he says. Before that, I had always thought that I was more physical than artistic. »

His passion for manga will then catch up with him. Inveterate reader of One Piece – but also of Dragon Ball, Naruto, Bleach, Tokyo Ghoul, Attack on Titan, etc. –, this father of three children begins to manufacture weapons, statues, masks, directly drawn from his favorite series. In zinc, always. His tools are those he uses in his professional activity: folder, shears, trimming hammer, soldering iron – the whole art being to assemble pieces of zinc sheets in order to obtain a harmonious curve.

The endorsement of the master

After a first 1.80 meter Luffy in “snakeman” mode (name of a fighting technique), Christophe Desnoielle recently tackled a “Joy Boy” Luffy version (the enigmatic double of the hero), who asked for three hundred hours of work – mostly at night: “I have hyperactivity disorder that can keep me awake for three days in a row. As long as this trouble is for something. »

Like a bottle in the sea, he then posted a photo of his work on the Facebook account of Eiichiro Oda, the creator of One Piece. His dyed green hair – identical to Zoro’s, Luffy’s right-hand man – almost fell out of amazement a few days later: “It’s a great job”, replied the master (or one of his assistants).

“I had a revenge to take on life. I’m right in it, “he says, unwinding the thread of an existence that has not always been very rosy. Fatherless at the age of 8, fifth child of six siblings, he first experienced “poverty”, before becoming a roofer “out of spite”, in order to bring in some money for the home. In an apprenticeship contract, a blunder earned him a serious “avoinee” from his boss, who is also his brother-in-law: “It almost put me off the job forever, he says. I didn’t like zinc and zinc didn’t like me. And then I learned to tame it. »

He will work as a worker and site manager in several companies in the region, will renovate the roofs of historical monuments, before creating his own company, in 2019, under the name of Aen Art’s. Aen means “zinc” in Japanese, a language of which Christophe Desnoielle understands a few words, by dint of watching the animated versions of his favorite mangas in VO. His ultimate dream? Climb into a… zinc, direction the country of the Rising Sun.