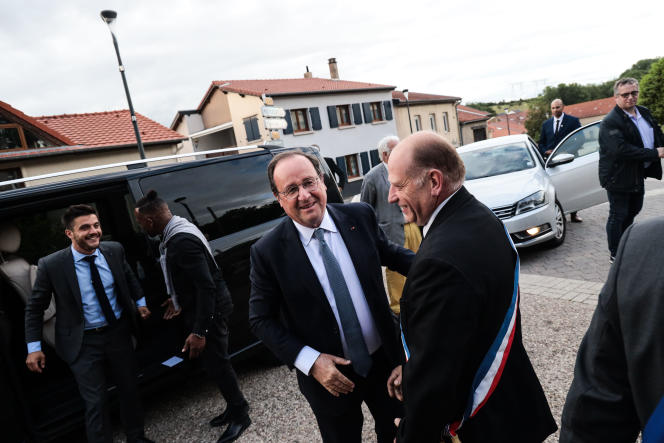 “Is it going to rain, or not? “A few minutes from the arrival of François Hollande on the evening of Wednesday June 8, Eric Gulino, the socialist mayor of the municipalities of Ogy, Montoy and Flanville (Moselle), scans the sky and its threatening clouds, his face twisted by a grimace. The former President of the Republic, unfavorably known to the organizers of outdoor events, sets foot in Montoy accompanied by an unpleasant drizzle. “Finally, it’s not raining that much,” jokes the former head of state, shaking hands with the mayor of the villages that have 1,800 inhabitants between them. The last socialist president of the Republic is in this twin village of Oradour-sur-Glane (Haute-Vienne) to participate in the ceremony of commemoration of the five Montévillois victims of Nazi barbarism on June 10, 1944.

But the presence of François Hollande does not stop there. He is also in Moselle to support those who are called here the “three musketeers”, understand the socialist dissidents of the party’s agreement with the New People’s Ecological and Social Union (Nupes) among the nine constituencies in the department.

“There are certain constituencies where the socialists are much better placed to win the left, said Mr. Holland to Le Monde. The Socialist Party is established throughout the national territory with local elected representatives and has only 50 constituencies out of 577 in the agreement. Here, in the 3rd constituency of the Moselle, made up of two-thirds of the city of Metz and about sixty villages, the socialist “musketeer” is called Eric Gulino. In a constituency that oscillates between Emmanuel Macron, Marine Le Pen and, to a lesser extent Jean-Luc Mélenchon, he knows that the socialist voices will be weak. For the thirteen other candidates, the biggest challenge is to mobilize voters, as the legislative elections leave them indifferent.

“The main challenge is to convince that the legislative elections are more important than the presidential one, because it is not the president but the National Assembly who votes the law”, advises François Hollande. In 2017, 51% of them did not go to the polls in the first round of legislative elections, and 57% did the same in the second. In the cantons of the constituency, the departmental elections had mobilized only 30% of voters. “I’m tired of this voter disinterest,” laments Eric Gulino. My adversary is abstention, which rots the debate. »

Two candidates on the left, three from the presidential majority

Among the fourteen candidates in the 3rd constituency, there is a Nupes dissidence with the Socialist Party (PS), two far-right candidates with the National Rally (RN) and Reconquête!, a candidate from the right and the center and three others who claim to belong to the presidential majority. A multicolored starting line that does not promote legibility for voters. “I think they’re going to be lost in front of the polling station,” predicted Françoise Grolet, the RN candidate, with a yellow laugh. Richard Lioger, the outgoing deputy invested by Together!, has thus opted, on his electoral poster, for a photo with Emmanuel Macron and a tablet of his deputy with Edouard Philippe in order to dispel doubts. But Marie-Jo Zimmermann, from whom he won the seat in 2017, by a short head, recently moved to Horizons, the party of the former prime minister, after being elected under the Republican label for ten- nine years old and having been on the list of Nicolas Dupont-Aignan (Debout la France) at the 2019 Europeans.

“Marie-Jo Zimmermann took her card from Horizons three months ago, she’s kind of a forger,” belches Richard Lioger. “We do not go from the far right to Edouard Philippe in three years, it confuses voters and they will not be fooled”, he hopes. For her part, the departmental councilor and former deputy sweeps away the accusations of deception. “Presidential Majority is not a label, I don’t want to mislead my voters. Normally, if the outgoing MP does his job, people don’t have to ask themselves the question of his political affiliation…”, she replies between several conversations with voters on the market of Place Saint-Livier in Metz . At 71, the one some candidates call “the Michel Drucker of the constituency” has experienced many electoral campaigns. But this worries him. “I think people haven’t gotten into these elections yet. Usually, interest peaks in the last weekend before the election. Here, this is not the case. »

The day before, near the Pompidou Center in Metz, Mr. Lioger, former socialist deputy for town planning in the city and rapporteur for the Elan law at the National Assembly, could see the difficulty in interesting passers-by. “I’m not at all savvy in politics, defends Amélie (the first name has been changed), a 37-year-old Messina, when he hands her one of his leaflets. I can’t figure out who is who, sometimes you get lost when you see that there are three or four candidates from the presidential majority”, recognizes this voter of Yannick Jadot in the first round of the presidential election and Emmanuel Macron on the second. “You see, this is a perfect illustration of what we are told on the ground when we go door to door,” the outgoing MP plagued.

Door-to-door is also one of the options chosen by Charlotte Leduc, the candidate La France insoumise, novice in politics and invested by Nupes. Accompanied by four other activists and with a dozen leaflets under her arm, she climbed the floors of one of the buildings in the popular Patrotte district. “Most people don’t know in which constituency they are voting, regrets the candidate, former president of Attac Moselle, who has been on the back burner since the start of the campaign. We do popular education and we help them register them on the electoral lists, it’s not up to us to do that…” Of the dozens of homes visited by the activists, only a few residents open their doors. Many others keep theirs closed and close their shutters. In this district, in 2016, between 10% and 15% of housing was unoccupied, according to data from the metropolis. To signal her passage despite everything, the candidate leaves, in the crack of the doors, one of her leaflets where her face appears next to the smile of Jean-Luc Mélenchon. The effort may not be worth it. In an embarrassed laugh, she slips: “We will see the leaflets in five years in the same place! »