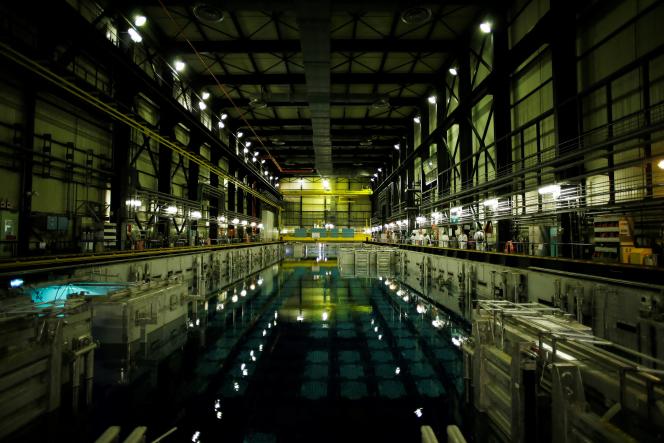 Several hundred demonstrators marched on Saturday June 18 in Cherbourg against the planned large nuclear fuel pool project in La Hague (Manche). “We were a thousand at the height [of the rally],” Marie Tassel, one of the members of the Stop Nuclear Pool Collective, told Agence France-Presse (AFP).

This gathering was organized the day before the relaunch, Monday, of the consultation on this project carried by the National Commission for Public Debate (CNDP). This new phase of the consultation must last until July 7. “The nuclear dustbins are everyone’s business”, “the dustbin is full”, or even “La Hague radiant terminus”, could be read on some of the signs held up by the demonstrators.

The collective, which refuses to take part in the debate, denounces in particular what it considers to be a lack of “transparency” in the public consultation launched about this project. “Even by changing the terms of the consultation, neutrality and transparency will not be the basic rules, and EDF remains the organizer and the leader of the consultation”, writes the collective in a text setting out its position. Launched on November 22, the consultation was suspended at the beginning of February. The purpose of this suspension, explained Chantal Jouanno, the president of the CNDP, was “to rethink the modalities [of the debate] to undoubtedly cover a wider territory”.

This swimming pool project, a pool 70 meters long, has a storage capacity of 6,500 tonnes of fuel. It would be built next to the current La Hague basins, where just under 10,000 tonnes of spent fuel in French nuclear power plants cool, the equivalent of 100 reactor cores.

This project, costing 1.25 billion euros according to EDF, its initiator, aims to respond to the risk of saturation of the current basins. If the basins are full, the reactors must gradually shut down, and in June 2020 the Nuclear Safety Authority (ASN) considered the launch of the project “really urgent”.

A pillar of the local economy, nuclear power is an eminently sensitive subject in the north of the Cotentin. The Cotentin agglomeration community includes on its territory La Hague, the EDF nuclear power plant in Flamanville and the nuclear submarine factory in Cherbourg. In a press release, at the end of January, the elected representatives of the agglomeration community, while recalling their “attachment to nuclear power”, had specified that “this attachment cannot presuppose an acceptance of any new industrial project at any cost and without respect for local elected officials and residents”.