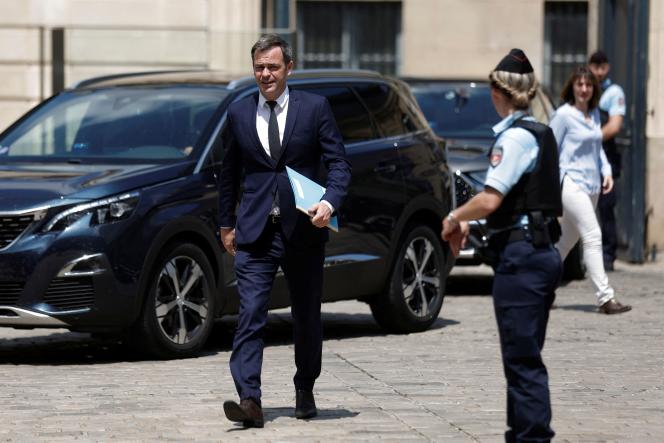 He only remained minister responsible for relations with Parliament for a few weeks. Olivier Véran was appointed government spokesperson on Monday July 4 in the second government of Elisabeth Borne. The deputy of Isère thus succeeds Olivia Grégoire, who returns to Bercy, and will be one of the important ministers of Emmanuel Macron’s second five-year term. The 42-year-old neurologist will have a broader portfolio than his predecessor, since he is also appointed Minister Delegate for Democratic Renewal.

In Parliament, Mr. Véran, who was described by many deputies as a divisive minister after his time at the Ministry of Health during the Covid-19 crisis, will be replaced by Franck Riester. The latter, a former member of the Les Républicains party before participating in the creation of the centre-right Agir party and now a member of the Renaissance group (formerly La République en Marche), appears to be more consensual, while the Ministry of Relations with the Parliament is strategic for this five-year term given the situation in the National Assembly, where the presidential coalition does not have an absolute majority.

A few minutes before the official announcement of the reshuffle on Monday morning, the Vice-President of the National Assembly and National Rally (RN) deputy from the North, Sébastien Chenu, also described on Franceinfo as “a good thing” the announced departure of ‘Olivier Veran.

Mr. Véran, LRM deputy since 2017, after having sat in the Assembly on the benches of the Socialist Party between 2012 and 2015, became known to the general public in February 2020 when he arrived at the Ministry of Health. He then replaced Agnès Buzyn, propelled candidate of La République en Marche (LRM) at the City Hall of Paris after the crash of Benjamin Griveaux. A few weeks later, France was confined. Upon his arrival at the Ministry of Health and Solidarity, Mr. Véran had to manage the health crisis, the health system on the verge of implosion and weakened hospital staff.

Over the long months of confinement, deconfinement and reconfinement, Mr. Véran has become one of the familiar faces of daily press conferences on the evolution of the human toll of the Covid-19 epidemic. He pleaded for widely vaccinating the population and for the implementation of the health pass, the latter having, according to him, proven its effectiveness against the epidemic, which caused the death of 149,585 people carrying SARS-CoV. -2, according to Public Health France as of July 3.

Renowned as a good communicator, Mr. Véran was re-elected on June 19 in the 1st district of Isère. He obtained 57.7% of the vote against the candidate of the New People’s Ecological and Social Union (Nupes), Salomé Robin (42.3%).