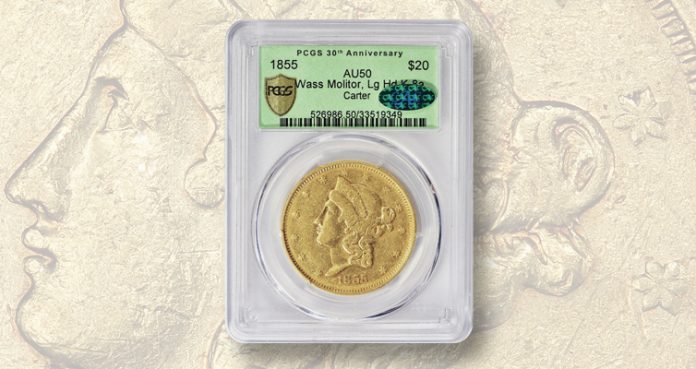 An auction hosted by GreatCollections will offer one of the four 1855 Wass, Molitor & Co., Large Head pioneer-gold $20 coins. It is the only one that collectors have access to. The closing date for the auction is Aug. 15.

According to Private gold Coins and Patterns for the United States by Donald H. Kagin the coin is Kagin 8a. It is the only example of the Large Head reverse die paired with the reverse, which is rare in this type of coin.

Professional Coin Grading Service grades the coin and seals it with a protective capsule. Certified Acceptance Corp. sticks to it.

One of three Large Head coins is still available. It was once part of Josiah K. Lilly’s gold coin collection. The other was taken in 1967 by Willis H. DuPont, and was never recovered. The third was also taken in a 1967 heist from Yale University.

Some sources suggest that the piece taken from Yale University may be recovered. However, it is not known whereabouts at present. Officials from Yale University Collection did not respond by Coin World’s publication deadline to inquiries about the status of their pioneering gold coin.

GreatCollections has recorded seven auction appearances by an 1855 Wass, Molitor & Co., Large-Head $20 pioneer gold coin, since 1896, six of which were the unique marriage.

This unique variety was not identified until the last public auction in 2014. It sold for $558,125 at Heritage Auctions’ April 24 sale.

According to Heritage’s lot description, the Kagin 8adie marriage “exhibits a reverse of the larger Wass, Molitor & Co. Small Head twenty-dollar piece, K-7. Both reverses can be distinguished easily as the K-7 reverse shows an eagle’s left (facing), wingtip pointing towards the R in FRANCISCO while the K-8 reverse points toward the F. Wayne Burt, numismatic expert, first observed this difference while looking at the Heritage website image of the current coin. Burt, Saul Teichman and Stuart Levine further investigated the matter, as Heritage cataloger David Stone discovered that all three other Large Head coins still have the K-8 reverse. This makes the coin here the only example of the newly discovered territorial-gold variety.

Wass, Molitor & Co. were among several private mints that operated around San Francisco during the Gold Rush era 1849-1855.

Molitor arrived in California in 1851, Wass in 1850. The two men established an assaying office in October 1851. The firm had begun to produce gold $5 coins by January 6, 1852. A few weeks later, it began producing gold $10 coins to satisfy the region’s coinage requirements.

The production resumed in 1855 with the gold $10, $20, and $50 coins. This was because the firm was asked to strike the gold coins. However, the San Francisco Mint, established in 1854, had to temporarily close its operations due to a shortage of parting acid.

The 1855 $20 coins featured both the Large Head and Small Head obverse designs.

After the distribution of these coins, Wass, Molitor & Co. collapsed and Molitor fled California in 1856 for London. Wass also left, his fortunes declining in his absence. However, he returned to California in 1858 and began a new assaying company with his son Stephen.

Due to their intrinsic value, almost all of the Large Head $20 coins of Wass, Molitor & Co. were soon destroyed.