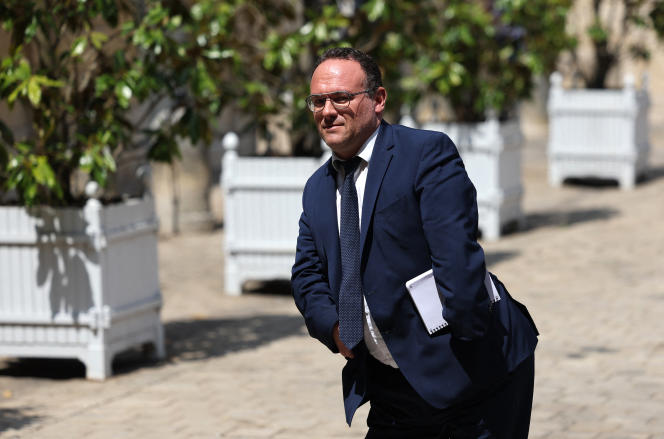 Having become embarrassing, almost cumbersome for a head of state claiming to be a defender of the women’s cause, Damien Abad leaves the government on Monday, July 4. Barely a month and a half after his appointment as Minister of Solidarity, Autonomy and People with Disabilities, the Republican (LR) defector reluctantly resigns, during the reshuffle announced in the morning. The 40-year-old bears the brunt of the accusations of rape, attempted rape and sexual assault which have multiplied against him. He is replaced by a pair composed of Jean-Christophe Combe director general of the French Red Cross and Geneviève Darrieussecq, member of the MoDem, who was minister of veterans during the first five-year term.

Elected hands down in his constituency of Ain on June 19, the former president of the LR group in the Assembly had believed that his electoral victory, presented as that of “courage, heart, work and proximity “, torn in a context of quasi-berezina for the members of the government, would put him at the shelter. For a long time, the entourage of the Head of State had asserted the presumption of innocence, to save the “soldier Abad”, taken from the war of the macronie quick to strip the LR party little by little of its members. But the opening of an investigation by the Paris prosecutor’s office, announced on June 29, will have sealed the fate of the forties and increased the pressure from the opposition.

“[The maintenance of Damien Abad in government] would be unbearable (…) politically, there is a precautionary principle and a message sent symbolically to all women in France”, had estimated Clémentine Autain, deputy La France insoumise, on LCP, June 30. “Damien Abad is also in charge of policies for equality between women and men, solidarity, the fight against violence against women within the framework of his ministry. So it is all the same very particular that a gentleman who has complaints of rape from elected officials of the Republic [remains in the government]. This gentleman should have left on his own if he had any dignity! “, had abounded, on BFM-TV, Aurélien Taché, deputy of Val-d’Oise and former member of the presidential party La Répblique en Marche.

Damien Abad, “must have time to be able to defend himself” and “devote himself fully to it”, had warned Prisca Thévenot, Renaissance deputy (presidential party) for Hauts-de-Seine, on Franceinfo, July 2. Questioned on Monday, the outgoing minister indicated that he would speak during the handover, which was to take place during the day. At the opening of the investigation, the elected official had made it known through his advice that he denied all the various accusations and that he intended to “quickly demonstrate his innocence”.

For this departure, presented as “logical” by the entourage of Elisabeth Borne, the Prime Minister is based on the idea that the minister was now considered “prevented”. Each of his outings was, in fact, accompanied by comments related to the cases concerning him. The head of government was, de facto, constrained by her statement dated May 22: “I can assure you that if there are new elements, if justice is again seized, we will draw all the consequences of this decision” , she said. The tenant of Matignon, while refusing to be a “judge”, wants to be “intransigent” on the subject of the exemplary nature of the members of the government, it is indicated in his entourage.

Target of feminists, the Minister of the Interior, Gérald Darmanin, notably targeted by an accusation of a complaint closed without follow-up, retains his functions at Place Beauvau. Chrysoula Zacharopoulou, Secretary of State in charge of the Francophonie, who is the subject of complaints for rape within the framework of her functions as a gynecologist, is also confirmed in her post.