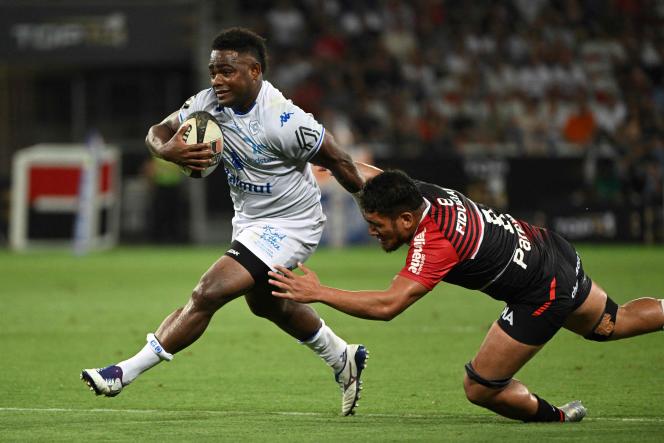 Until then, the logic is respected: Castres, first of the regular phase, qualified for the final of the Top 14 thanks to its victory at the end of the suspense, Friday June 17, on Toulouse (24-18), holder of the title, in the semi-finals in Nice, in a derby atmosphere.

It did not escape the Tarnais that, on the road to their last coronation in 2018, they had already eliminated Stade Toulousain, defending champion. The CO will face, on June 24, in the final – the eighth in its history – Montpellier or Bordeaux-Bègles, opposed on Saturday, to the Allianz Riviera as well.

Friday evening, in the usual den of footballers from OGC Nice, rather evenly shared between red and blue supporters, the Toulousains, as during their victorious barrage against La Rochelle (33-28) last week, had nevertheless printed a high pace of entry. A flat start rewarded by a try – possibly tainted by a forward – from the 2nd minute of the international winger Matthis Lebel, who rushed into an interval inside to go flatten between the posts, facing the Castres kop, which is particularly noisy.

Dominating in conquest, the men of Ugo Mola gradually lowered their tone and let, by their indiscipline, the Castrese return to the match thanks to the precise foot of the Argentinian opener Benjamin Urdapilleta. Emboldened by the two yellow cards inflicted on Australian giant Rory Arnold and hooker Julien Marchand, Castres, after letting the storm pass, could even have taken the lead at the break without a try denied by the video to winger Geoffrey Palis (9-10).

Under a more bearable temperature than that prevailing in Occitania, the Tarn club, much less in demand than its opponent for several months, finally took the lead as soon as they returned from the locker room. The Uruguayan scrum-half, Santiago Arata, passed in the hierarchy of Castres of the position in front of the local idol Rory Kockott, went to flatten in trickster at the level of a ruck the first try of his team (16-10, 43rd).

On an individual feat by the Blues opener Romain Ntamack, whose acceleration mystified the opposing defense, Toulouse seemed to pick up the thread of his match for a time by returning to a point behind his opponent, then even taking the advantage. on a penalty from Thomas Ramos (18-16). But the CO, still as combative, tore away to force the decision in the last ten minutes and validate their ticket for the Stade de France for good thanks to a penalty from Urdapilleta and a new try, this time scored by the rear Julien Dumora. And then to dream of a sixth Shield of Brennus.

“The job is not finished, recalls the three-quarter center Castres Thomas Combezou. The finality is next week [in the final]. This semi-final was like our season, a tough, close match. We didn’t give up, we knew that we had to work a lot, and that at one time or another it could give way in our favor. »

On the Toulouse side, it’s disappointment. The beautiful machine has experienced too many failures, like a checkered season which had started well before experiencing a big slump in the heart of winter in the absence of its many French internationals, retained by the Six Nations Tournament.

Stung in his pride by his heavy defeat in the semi-final of the European Cup against the Irish of Leinster (40-17) which dispossessed him of his title, the biggest winners of French rugby seemed to have regained its best level during the week. last in the shoot-off against La Rochelle. He finally fell back into his failings against Castres.

“Our indiscipline at the start of the game is costing us a bit too much and allowing Castres to get back into the game,” analyzes Toulouse coach Ugo Mola. “We may have been missing a few ingredients for a while, but we’re not too far off either,” he concludes.

In view of the quality of the workforce, the white season is hurting Stade Toulousain. But the recruitment made for next season (Pierre-Louis Barassi, Melvyn Jaminet, Arthur Retière, Ange Capuozzo, etc.) could allow him to bounce back.