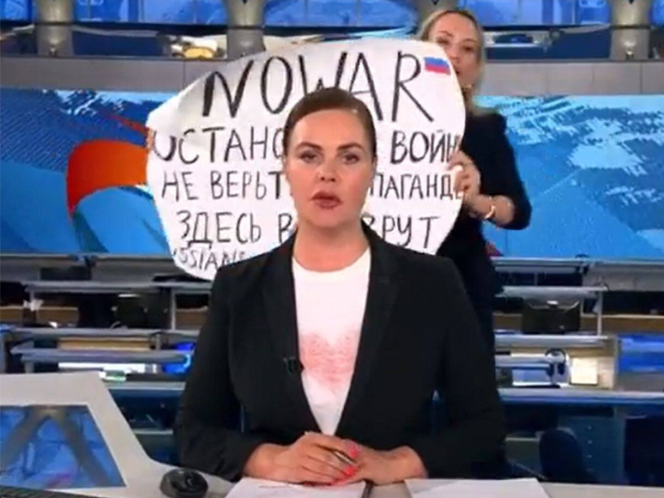 Russian journalist Marina Ovsiannikova, who became famous after appearing live on television with a sign criticizing Moscow’s offensive in Ukraine, was arrested on Sunday July 17 in Russia, her entourage and her lawyer said.

Her arrest comes days after Ms Ovsiannikova protested alone near the Kremlin holding up a sign criticizing the military intervention in Ukraine and President Vladimir Putin. “Marina has been arrested. There is no information on her whereabouts,” said a message posted by those around her on the journalist’s Telegram account. This message is accompanied by three photos in which we see Ms. Ovsiannikova, 44, being taken to a white van by two police officers after having apparently been stopped while riding her bicycle.

His lawyer, Dmitry Zakhvatov, confirmed the arrest to the Ria-Novosti news agency, saying he did not know where his client was taken. “I presume it is related in some way to his act of protest,” he added.

Such statements could in theory expose him to criminal charges for publishing “false information” and “vilification” of the military, charges that carry lengthy prison terms.

Ms. Ovsiannikova shot to world fame in mid-March after appearing on the evening news on a pro-Kremlin TV station where she then worked with a sign criticizing the Ukraine offensive and “propaganda”. government-controlled media. Briefly detained in the process, she was released with a fine to pay. Images of her gesture have gone around the world, with many people hailing the courage of the journalist, in a context of repression of any critical voice in Russia.

One example among others of the repressive climate, the famous Russian opponent Ilia Yachine was placed in pre-trial detention on Wednesday pending trial for having criticized the operation in Ukraine.

Ms. Ovsiannikova is not unanimous among the Russian opposition, however, with some continuing to blame her for the years spent working for the Pervy Kanal channel, the Kremlin’s mouthpiece. After working for several months abroad, notably for the German newspaper Die Welt, the journalist announced in early July that she had returned to Russia to settle a dispute related to the custody of her two children.