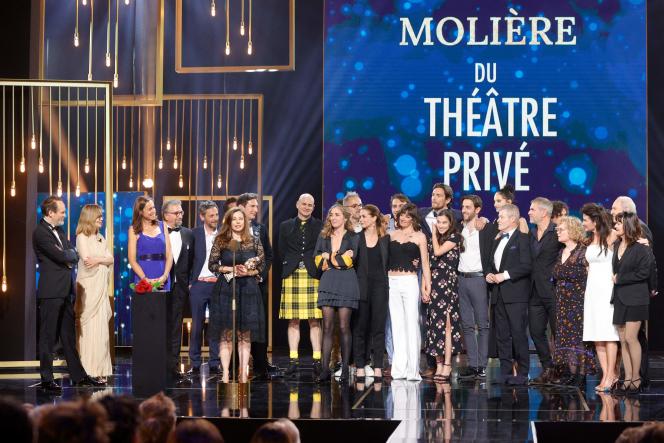 The Shakespearian comedy As You Like It, in a version by Léna Bréban, dominated the prestigious Molières ceremony which rewards the world of theatre, winning four statuettes on Monday, May 30: best private theater show, best staging in the private sector, best actress in private theater (Barbara Schulz), best actress in a supporting role (Ariane Mourier).

Humor, musical comedy and magical shows won the prize list for this ceremony, which coincided with the 400th anniversary of the birth of Molière, but also with a drop in attendance in theaters.

“It is not by staying in front of our screens waiting for meal deliverers that we will triumph over our anxieties… It is by laughing or crying, by sharing our emotions in a theater”, pleaded the president of this edition, the actress Isabelle Carré, at the start of the evening retransmitted on France 3. According to figures from the Association for the support of private theater quoted by the newspaper Les Echos, attendance in the first quarter of 2022 is down by 44% compared to 2019.

In addition to Léna Bréban’s show, this 33rd edition also rewarded another comedy, Berlin Berlin. This story about a couple who, during the Cold War, wanted to flee and move to the West, won the Molière for comedy and the best actor in private theater (Maxime d’Aboville).

As for the musical Les Producteurs, in a staging by the gifted French theater artist Alexis Michalik, it won two Molières (best musical show and male revelation for Benoît Cauden).

The most coveted couple of directors of the moment, Christian Hecq and Valérie Lesort, won two statuettes (visual creation and staging for a public theater show) for Le Voyage de Gulliver, a show that enchanted children and big in January.

But, as expected, this ceremony was overtaken by the wave

A call to appoint a referent or referent for sexual violence

Inside the room, calls have been made to move the lines. “You still don’t know what’s going on inside your theaters,” said actress Nathalie Mann, representing “Actrices etacteurs de france associés” onstage. She called for “appointing a referent or a referent” for sexual and gender-based violence in theatrical institutions, as is the case on film sets.

Pauline Bureau, who won the Molière for living French-speaking author for her play on a women’s football team, recalled that “18% of public money goes to companies run by women” and called the new Minister of culture, Rima Abdul Malak, present in the room, to make it his hobbyhorse.

Despite the seriousness of the topics covered, including tributes to Ukraine, master of ceremonies and humorist Alex Vizorek tried to inject humor throughout the evening, immediately telling the audience gathered in the Folies Bergère in Paris: “I hope everyone was able to return, and that it was not the Stade de France”, in reference to the incidents which occurred on Saturday near the Dionysian enclosure during the final of the Football Champions League.

Big named stars, such as Isabelle Adjani, Vanessa Paradis, Laetitia Casta or Pierre Arditi, left empty-handed from this ceremony, which had been organized without an audience in 2020 and then canceled last year because of the Covid.

And a tribute was paid to Michel Bouquet, tutelary figure of French theater and cinema, who died on April 13 at the age of 96, and an honorary Molière was awarded to a heavyweight on the stage, the actor Jacques Weber.