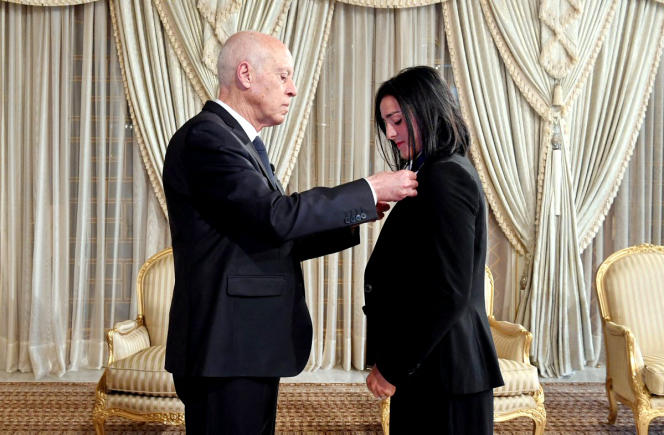 Tunisian Ons Jabeur, beaten in the final of the Wimbledon tournament on Saturday July 9 in London, received the Grand Medal of the National Order of Merit from President Kaïs Saïed on Thursday for “her remarkable sporting successes”.

By receiving her at the presidential palace in Carthage with her trainer and her husband – who is also her physical trainer – the Head of State wanted to thank her with this prestigious decoration for having hoisted “high the flag of the country in sporting events international”. “She was the ambassador of Tunisia” and showed “the ability of our youth to shine in all areas when the necessary means and conditions are provided to them”, according to an official statement.

Ons Jabeur, nicknamed “Minister of Happiness” in Tunisia, became the first Arab and the first African to reach the final of a Grand Slam tournament after beating Germany’s Maria Tatiana in the semi-finals at Wimbledon. The Tunisian then lost in the final against Kazakh of Russian origin Elena Rybakina (3-6, 6-2, 6-2).

“Congratulations on this achievement and future successes. You give an image to young Tunisians and of the Tunisian woman who takes up all challenges,” President Kaïs Saïed told her when awarding her the medal. “It makes us proud as Tunisians. We want to give more hope to the young people watching us. We hope to continue this momentum. We are proud to be Tunisians and we will continue in this success story,” replied the 27-year-old, who rose from second to fifth in the world despite her achievement at Wimbledon.

On Friday, a popular celebration will take place on the central artery of Tunis, Habib-Bourguiba Avenue. Ons Jabeur enjoys great popularity in her country and on social networks: when she arrived at the airport on Wednesday, she graciously took many selfies, also agreeing to sign dozens of autographs. Since she resumed her rise in the WTA rankings in 2018, the number of members in her club in Hammam Sousse (center-east) has doubled to 700 members.