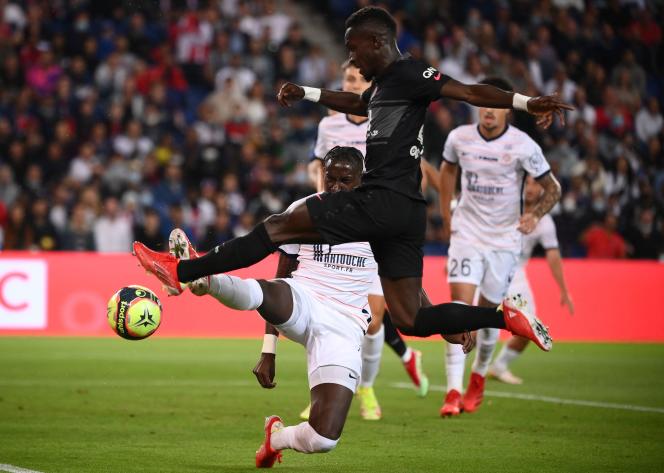 It is an absence that has not gone unnoticed and which is causing controversy. Paris-Saint-Germain player Idrissa Gueye did not play on Saturday May 14 during the day dedicated to the fight against homophobia, on the occasion of which the players of the championship wear a rainbow jersey.

Paris-SG coach Mauricio Pochettino mentioned “personal reasons”, stating that his player “was not injured”. A source close to the locker room speaks of “individual choice of the player”, who “put himself aside”. Idrissa Gueye had also not played in 2021 on the same day, citing gastroenteritis.

The person concerned made no public statement to justify his absence on Saturday. His entourage, contacted by AFP, refused to explain the reasons. At PSG, we did not comment on the Gueye case, but the club recalled being “completely committed to the fight against homophobia and discrimination, with Sportitude or SOS-Racisme. Our players wore this jersey with pride, the biggest stars, Messi, Neymar or Mbappé, expressing the club’s commitment.”

“Homophobia is not an opinion but a crime,” the collective Rouge Direct, which fights against homophobia in sport, said on Twitter. “The LFP [Professional Football League] and PSG must ask Idrissa Gueye to explain himself and very quickly. And punish him if necessary.”

“I regret that he did not participate in this day which is not a promotion of homosexuality but a promotion of living together”, declared for his part Bertrand Lambert, the president of Panam Boyz and Girlz United, club open to diversity. our associations fighting against homophobia. In the same way that wearing an armband to fight racism does not change the skin color of the wearer, wearing a rainbow jersey does not change sexuality. It just breaks down prejudices.”

The Minister for Sports, Roxana Maracineanu, judged “personally”, “regrettable that he did not want to play” with this jersey, she told Le Parisien. “The players of a football club, and those of PSG in particular, are figures of identification for our young people. They have a duty to set an example. A refusal by Idrissa Gana Gueye to join the fight against homophobia could not remain without sanction! “, posted on Twitter Valérie Pécresse, ex-candidate in the presidential election.

Bertrand Lambert “regrets that there is no reaction at the highest level of the State, PSG and football authorities. That said, we must not forget that what happened this weekend is quite marginal since there is only one who refused. In 2019, several players refused to wear a rainbow armband. “There is still resistance, but it is progressing”, sums up Bertrand Lambert.

In Senegal, where Gueye and his colleagues in the selection are adored, many supports for the PSG player have been posted on social networks. In this 95% Muslim and very practicing country, homosexuality, punishable by a sentence of one to five years in prison, is widely considered as deviance. Writer El Hamidou Kasse said on Twitter to support Gueye “in the name of the principle of free belief and respect for differences. »

The movement called “Y en a marre”, active in particular in the defense of democracy, “vigorously denounces this demonization of which he [Gueye] is a victim”, in a press release.